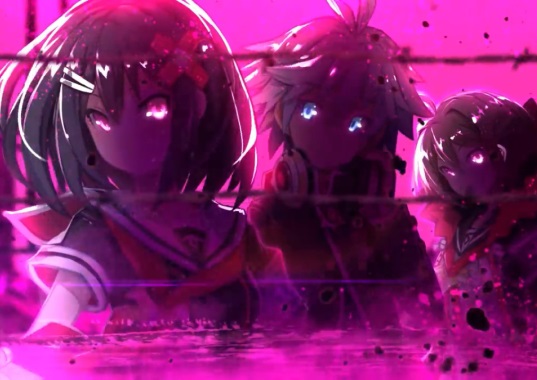 Mary Skelter is the oddest game that Compile Heart has produced. It’s the least sexualised game from the studio that has made it its M.O to get girls down to their underwear at every opportunity, and yet it’s also often the most erotic in tone. It’s deeply mature, and yet plays on innocence and fairy tales. It’s clumsily written, but intelligent at core. And it’s a dungeon crawler, but anything but a standard one. The contrasts and conflicts that run internally to the game give it a completely unique tone, and though it often feels like it shouldn’t work… it really, really works. This is Compile Heart’s most nuanced and mature game to date.

The basic premise of the game is that the dungeon itself is a living object. When we’re first introduced to it, our heroes are all imprisoned by this dungeon, which tortures and torments all captive within it. Upon achieving a daring escape, our two main heroes – Jack and Alice (yes, named after respective children’s fairy tale and literature characters) find themselves taking up residence within a small compound of freed people. From there they join with other heroes, such as Snow White, Thumbelina, and so on, in attempting to find an escape from their torments.

This dungeon is absolutely fascinating as an entity, even before you start to consider the way it’s constructed and the puzzles within it. Every couple of steps is a reminder that this is a living organism with a mind of its own. There’ll be an exposed eye or vein-like object in the wall, which you can slice open to obtain treasure. Trees, plants and other organic objects are frequently the barriers that seek to hinder your progress. In the heart of each area of the dungeon lies a “core”- heart – that, once destroyed, rewards you with a primal scream coming from the dungeon itself. 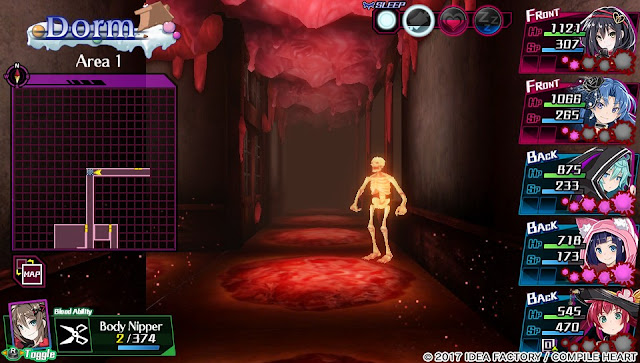 The atmosphere of exploring a “living” dungeon makes Mary Skelter’s environments feel all the more hostile, but there is some slight relief, because the dungeon also has very human desires that your group of heroes can satiate for some basic rewards. The dungeon feels hunger, lust, and needs sleep. The conditions for providing the dungeon with these things are different (feed its hunger by overkilling enemies, which cause them to explode in a gory mess, help its libido by finding special “sensitive” spots in the dungeon), but the rewards can be the difference between life and death in this environment.

The dungeon is no friend, though. Within each area rests an almighty monster of near-impossible power; the nightmares. They’ll randomly show up as you explore, and the only way to survive those encounters is to run away from them as fast as possible; an act made all the more difficult because when the chase is on, the minimap is not available to you. Duck down the wrong corridor and end up in a dead end and it can easily be curtains for your quest. These nightmares, which I liken to the immune system of the dungeon protecting it from intruders, can only be defeated after the core is destroyed, so the rhythm of Mary Skelter involves exploring, running when the nightmare shows up, and then finally turning the tables once you reach the core.

This will be an odd comparison to make, but Mary Skelter often reminded me of a Japanese aesthetic take on filmmaker David Cronenberg’s approach to art. Cronenberg’s films are so often characterised by taking inanimate objects or concepts and giving them a fetishistic, organic quality. Whether it’s a human getting sucked into a television that has suddenly become fleshy, or the sinewy guns that so characterised Existenz, Cronenberg’s films are both beautiful and sickening in the way they treat human interactions with that which is important around them. 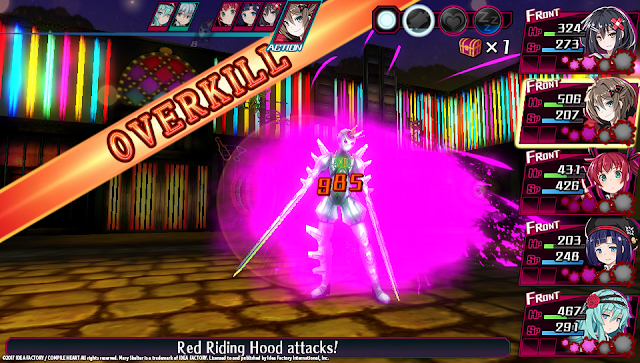 Mary Skelter is similarly fetishistic in its treatment of this dungeon. Its exposed organs and the way it screams and tremors takes a game that otherwise looks like a fairly simple, albeit beautiful, Japanese dungeon crawler game, and twists it into something dark, with a sharp sadomasochistic edge. It’s subtle enough that for most players it’ll leave a vague impression, rather than something they’ll be cognizant of, but there is definitely an fetishtistic edge to the design and characterisation of this dungeon that makes it fundamentally more interesting than a series of walls and doors to wander through.

More overtly fetishistic in tone is the way the lead (and only) male hero in the party, Jack, participates in battles. He’s a completely ineffective combatant by himself; all he can do is take a hit for one of the women doing the real fighting, and preventing that girl for taking damage for one turn. That ability is useful in a pinch, but his real role in battle is to keep the girls from going berserk. In battle, each girl has a “blood meter” which accumulates as she does damage on her enemies. If that meter fills up, she enters a “Blood Massacre” state, where she is massively powered up for a brief period.

That’s the good. But, if the girl takes damage in battle, her mood can darken, and this is reflected by the blood meter turning dark. If it fills while dark, she’s likely to instead go berserk and enter a “Blood Skelter” state, becoming even more powerful, but damaging ally and enemy alike. It’s not a good thing, on any level. And that’s where Jack comes in. He carries with him a “gun” that he can fill with his own blood. If he splatters his blood over one of the girls, her mood will be instantly cleared, and she’ll avoid turning berserk (or if she’s already berserk, being coated in Jack’s blood will revert her to normal). 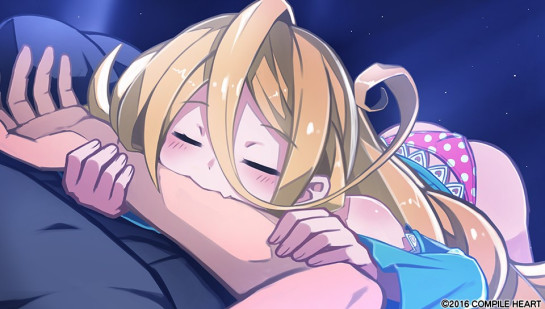 Outside of the game’s themes, it’s a clean dungeon crawler, with excellent level design filled with puzzles that are engaging without being enraging, and a turn-based combat system which anyone who is familiar with the likes of Etrian Odyssey or Demon Gaze will immediately find comfortable. Compile Heart’s standard issues are abound here, of course; the developer really struggles with tutorials and making the game’s ideas clear in the early stages, and the difficulty spikes can be obscene at times. The showdowns with the nightmares, especially, are so far beyond the difficulty of the enemies leading up to them that you’ll likely find yourself grinding battles with basic enemies that are no longer a challenge in any way just for experience. For a game that does such a good job of building atmosphere otherwise, to have these “downtimes” is a bit disappointing. I know the crawler genre is meant to be difficult, but if any example of it could have got away with leaning on the easier side, it would be this one.

I must say again that this is as restrained as Compile Heart gets in terms of its fanservice and the like, to the point where it’s genuinely amusing that the game got an R18+ rating in Australia. There’s a petting mini-game where you can interact with the girls, but it’s hardly as explicit as those minigames have been in the past. There’s the odd risqué image, but far too infrequent to be considered “high impact,” and then there’s the theme itself, which as described above, is fetishistic without being explicit. But the latter are subtle and generally not visualised. So it’s odd, and I think anyone going in, seeing the R18+ label and thinking to themselves “yep, this is going to be a Compile Heart game,” will be quite surprised. Related reading: Another dungeon crawler from Compile Heart, and one that goes all-in with the fanservice, is Moero Chronicle. Ginny’s review.

Mary Skelter is sublime. By turns darkly sensual and horrific, it’s also beautiful, ravishing, and backed by truly expert level design and a clean, clever combat system. This game is too different to effectively compare to other dungeon crawlers, but I must say, of all the many games in this genre that I’ve played, this one will sit with me for a very long time into the future.