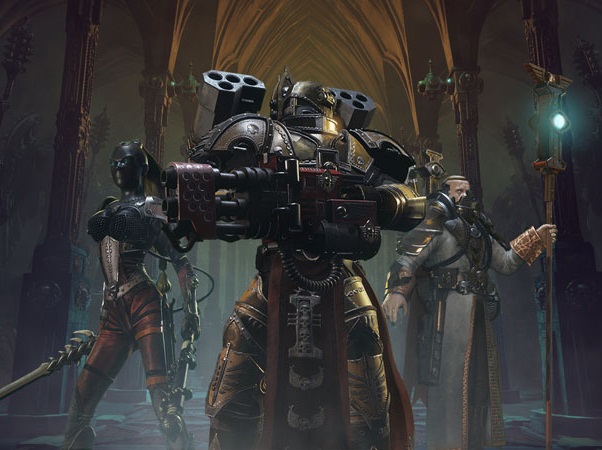 Games Workshop, the company that creates the Warhammer tabletop game, has adopted one of the strangest licensing strategies after THQ – its previous partner and exclusive license holder – declared bankruptcy. Since then, the company has licensed its Warhammer properties to just about any developer. Warhammer Inquisitor: Martyr is the latest to come to us, and while it itself is perfectly decent, I am astounded at how just how bad this licensing strategy has been.
There’s been a complete devaluation in the Warhammer brand in video games on account of there being almost no rules of overarching strategy regarding what has been made. Some developers have stuck closely to the tabletop game’s strategy roots (Total War: Warhammer being the pinnacle there) but others have deviated wildly, from stupid mobile shovelware (Snotling Fling) through to multiplayer FPS/action titles (Vermintide), and titles like Martyr, here, which is a top-down action RPG that most closely resembles Diablo. Many of these titles are quality in their own right, but with no overarching strategy, consistency, or production standards tying them all together, there’s also nothing that readily defines a game as a “Warhammer” experience now, and that’s a pity, because back in the early days, when developers like Microprose had exclusive rights and we were getting stuff like Shadow of the Horned Rat, Warhammer was something easy to love for its reliability.
That being said, that’s a digression, because looking at Martyr in isolation, it’s actually a decent effort that carries a suitably dark theme nicely. For anyone who hasn’t experienced Warhammer 40,000 before, a basic primer: It’s as dark as science fiction comes, with humanity beset on all sides by all kinds of alien monstrosities, and that has led humanity to call back to some of its more horrible moments, such as the Inquisition. Human forces are expected to be zealots, and are thrown into conflict against impossible odds in the name of an expansionist and imperialist humanity. 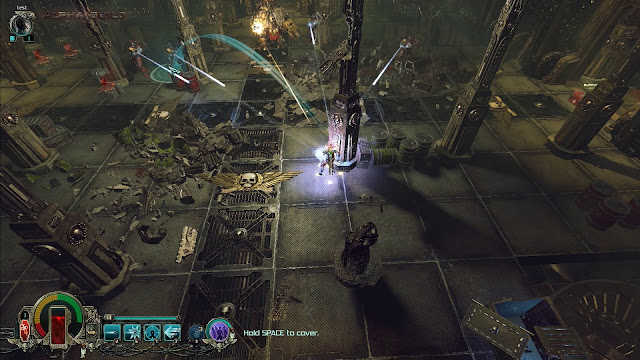 In Martyr, you play as one of three different classes that belongs to a special branch of the human forces, following a trail of breadcrumbs to explain what happened to a massive, hulking city ship that disappeared and re-appeared much later on, with the descendents of its crew having converted to the worship of Chaos while lost (humanity’s greatest enemies of all). From there the narrative takes some surprisingly good twists and turns, and while it remains pulpy by design, I was impressed in its ability to keep my attention. Effectively, the narrative is a mix of the vastly under-appreciated Event Horizon, and Warhammer 40K lore. If you like that grim, gothic horror Sci-Fi of Event Horizon, but never got into Warhammer 40K, then you’ll enjoy the atmosphere and how the game handles its narrative discovery (much of which comes from piecing together broken bits of data from places that your hero explores), but unfortunately you’ll still find it hard going at times; Martyr really is loaded with Warhammer 40K lore, to the point where it’s probably fair to say it’s exclusionary to those who aren’t at least passingly familiar with it all.
The game itself is broken down into a series of short levels, each of which involve exploring a few corridors and rooms, each often covered with nightmarish, fleshy residue or the gore of recent slaughtered. Here’s a question; why can’t abject evil appreciate a tidy ship? I’m pretty sure evil can still appreciate hygiene. That aside, the absence of colour or variety in the level design does become draining after a while, and it’s too easy to become desensitised to the rancid corruption that it depicts. Thankfully this is offset by the short lengths of individual levels, which makes this an easy game to play in short bursts, and credit has to go to the developers for working hard to capture the essential aesthetic tone and remaining true to Warhammer 40K.
Martyr relies very heavily on very large swarms of enemies to provide a threat to you. Individually, even the biggest monstrosities aren’t overly threatening, because your character has access to some powerful skills right from the outset that will make you quite mobile over the battlefield, and able to hit hard. Skills are tied to specific pieces of equipment, which is a neat way of forcing you to consider what loot you’ll use, beyond the raw damage improvements they offer. Once you’ve found a mix of skills that you like, you’ll be wading through hordes of enemies with impunity, mowing them down with gunfire, or cutting them down in melee, and all without there being much apparent risk to your own character… that is, until the hordes get really, really big. 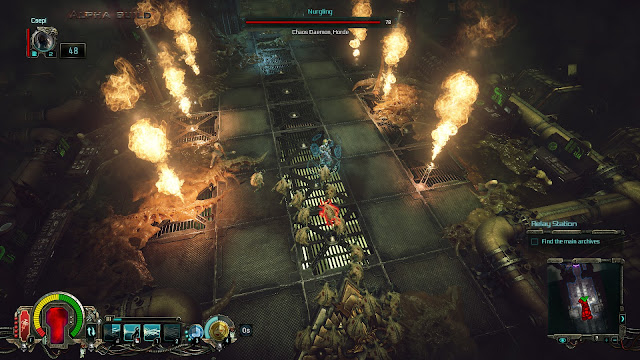 Unfortunately, it is difficult to track what’s going on sometimes, because you can lose your character in a mass of fleshy enemy bodies, and the flames from flamethrowers and the like. Additionally, there are all kinds of odd design decisions that let the game down. For example, there’s a full cover mechanic, when just about everything in Martyr seems otherwise tuned to a highly mobile dual-stick shooter approach to action – something like Alienation. Indeed, I ended up much preferring the melee combat, because every time I equipped my character with a gun, I tried to have her aim it with the right control stick, as I did in Alienation, only to be reminded that the only way to shoot enemies was to physically turn and face them.
That melee combat is nice and visceral, but after a while, Martyr’s combat loses some of its edge. The problem is that the enemies are so difficult to identify – there’s “the ones that shoot bullets”, the “big beasties” and “the ones that shoot flame”, but I would identify them by their role in an opposing horde, rather than recognise them as beasts from the Warhammer 40K universe. When so much of that universe relies on the lore of the various units and rival factions, this feels like a big missed opportunity. Especially when the game does work so hard to get the authentic touch into the storytelling and environment design.
It doesn’t help that a big part of the experience is tied up to the loot grind via randomised missions. The story itself behaves more as an introduction than anything, because once you get to a certain point, you’ll be encouraged to spend plenty of time taking on one “random” mission after another. The problem is that the randomisation doesn’t lead to anything particularly interesting, and while I like loot as much as the next person, I find it to be very lazy game design to push players into that grind. It’s padding content for the sake of content, and it does nothing to enhance the rest of the experience. Martyr is by no means the only game to do this (and Diablo itself gets trapped into these kinds of loops), but it bears mentioning nonetheless. 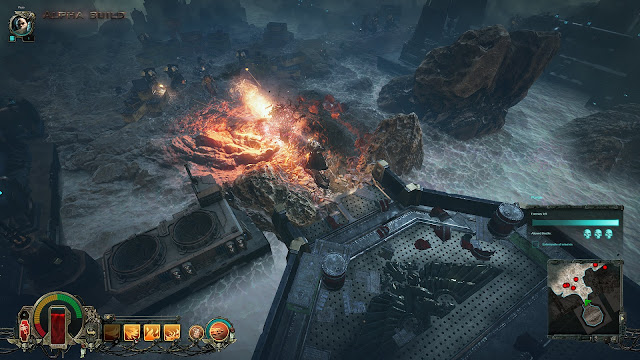 The PlayStation 4 port is also poorly optimised, and while I’m usually not a stickler for technical features, this one has a tutorial telling me to “press J key (or perhaps F – I can’t remember the exact key) to direct support units” during a defence mission. Those defence missions generally involve enemies coming from two or more different directions at once, so being able to issue commands to my units would have been a useful feature but… well, my PlayStation 4 controller doesn’t actually have a ‘J key.’ A trip into the controller menu didn’t even help there. To this day I don’t actually know what button I need to press to tell my units what to do in those defence missions, making them more frustrating than they need to be. Elsewhere the developer has thrown in some nice touches – the PlayStation 4 speaker is used to simulate a communication from home base while on a mission, but if you’ve got a smaller TV, be prepared for some pain, because the reading text is horribly optimised for the distance a person normally sits from their TV while gaming. Developers, please remember that people play games differently on console to how they play on TV, and optimise the UI appropriately.
Warhammer Inquisitor: Martyr succeeds in giving players an action RPG experience that manages to combine the action of a ‘Diablo clone’ with the Warhammer 40K license. It has a great skills system that’s tied to the equipment you use, rather than just the experience level, and that makes playing around with the copious amounts of loot that you’ll be earning very enjoyable. If only the execution of the game were as consistent and reliable as the design, and if only the developers had have put more effort into the optimisation for console.