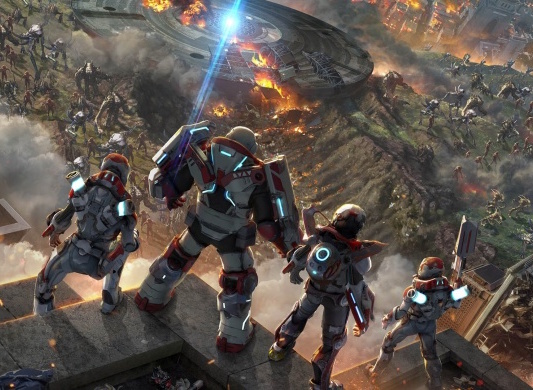 If you were to take Destiny and turn it into a top-down shooter, you’d have Alienation. Saying that probably sounds like a disapproval on my part, given that I was not the world’s biggest fan of Destiny… But I do like this one.

Coming to us from Housemarque, the same team that created the popular Dead Nation, Alienation shares more in common with that game than its derivative name. It too is a top-down dual stick shooter that wants you to play online, and it also wants to swamp you with hordes of enemies. A comprehensive loot system, as well as some robust RPG-like trappings, help to make this one’s grind far more palatable for players.

Upon starting out you’ll have three different classes to chose between, and these classes each grow in power in a way that is very reminiscent of what we see in Destiny. Loot drops have much the same visual impact on the character and the statistics that escalate in power as better equipment is found (the key statistic being damage, naturally) is equally reminiscent.

This is literally my worst nightmare. Bugs. #PS4share https://t.co/xc2V5hOL3W pic.twitter.com/8e5xoh96fU

Also in the spirit of Destiny, little numbers float in the air as you do damage to enemies, but it’s a smoke-and-mirrors effect in practice; enemies scale in power as you do, and basic grunts will always go down with a couple of shots, while more powerful ‘boss’ enemies take more work. In effect Alienation is less RPG, as it claims, and more like Gauntlet than Diablo, where it’s the sheer numbers of enemies that will keep you on your toes, dancing around and frantically reloading as they come in from all directions.

The smoke-and-mirrors do work, however, and I found myself grinding away quite happily, looking to upgrade my equipment to maximise my effectiveness. Where I struggle to be effective as I play FPSers (it’s simply not a skillset that I possess), I have no such issue with Alienation, and I derived a great deal more joy in taking the lead after building a team of four and cutting a swathe by leaping right into the thick of a horde of enemies.

While the narrative wasn’t ever going to be the focus of a game like this, it’s very XCOM-meets-Destiny, in which an alien invasion has reached the critical point where it’s about to end humanity, and you take control of one of the few remaining people that are able to stem the tide. This resistance effort involves heading to a range of different locations dotted around the world, and completing basic tasks, ranging from scouting areas, recovery missions and, naturally, extermination. 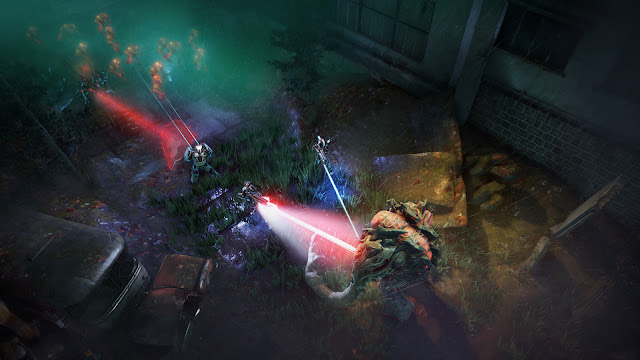 Throughout the missions there are voices chattering away at you in a headpiece, mostly just to explain to you where you need to go next, as maps are invariably much larger than you need to see on any one mission, so this is the game’s way of encouraging you to stay on track.

This narrative is perfectly functional, and does help in delivering the modern B-movie science fiction vibe. I doubt most people will find memorable moments from a narrative perspective from Alienation, though they’ll likely have favourite levels, based on the way the missions have been structured. The game is yet another unconsciously nationalist title, that places you as hero against swarm of “otherness” – the aliens, in this case. These aliens are, of course, automatically hostile, invading force that needs to be physically destroyed. I don’t the nationalist themes are deliberate – we’re so far naturalised to the “us and them” stories in western culture that we don’t even notice just how prevalent they are – but it is noteworthy just how often an unquestioning and patriotic understanding of heroism works into our game narratives.

Naturally Alienation is designed around the co-op play, and it shines at its best when you’re able to play with friends. There’s not a lot of room or need to build tactics into the teamwork, as each character class is quite capable of operating independently, but the simple ways that classes can interact with one another helps to provide an excuse to band together anyway. A healer build, still has a wide range of combat skills, but being able to tap the touch screen every once in a while to heal all nearby allies is a feel-good nice touch. Suddenly I felt like a team player. 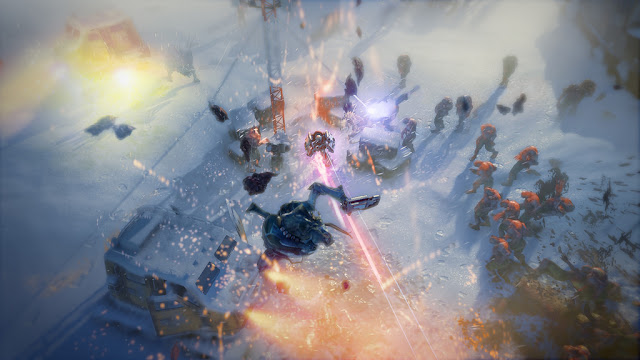 Playing online with randoms is really quite hit-and-miss, however. As with most multiplayer experiences I found that I was teamed with either fools or people who deliberately played like fools because they assume that they’re the funny variety of troll. Thankfully communication isn’t necessary to progress through this one, and there was the odd moment where a group would come together and just click. Those moments are great fun.

One nice little touch which Housemarque has brought over from Dead Nation is the global statistics. Between missions you can easily check out where your country ranks on the globe in terms of experience points accumulated – i.e. your nation’s contribution to the overall “resistance” effort. I’m proud to say Australia punches way above its weight by population; we got your back, world. That being said this gimmick could have been so much more interesting if it also had some kind of impact on the actual gameplay.

Back when Demon’s Souls was that uber-niche ultra-hard JRPG that a tiny handful played and loved, the online servers were used to great effect to leverage the data collected to enhance the game; the more players around the world struggled in overcoming the monsters, the “darker” the worlds in Demon’s Souls would become and the more challenging the game would be. Conversely, every major success that someone achieved would lighten the world just a little bit. 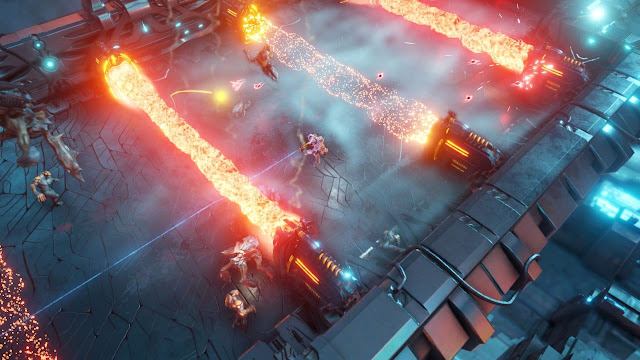 Housemarque could have very easily done something similar with Alienation. The fiction could have had enemy numbers being boosted in missions that take place in countries that aren’t accumulating so many experience points, for example (i.e. the resistance isn’t doing enough to stem the influx of enemy invaders). Or something. I’m not a game designer and wouldn’t presume to argue that that idea would actually work, but what I do know is that Housemarque is accumulating all this data on how people are playing its game, and not doing anything with it, which is a wasted opportunity when it’s making that data public.

Related reading: And for a more cerebral top-down action title, Blizzard’s Diablo 3 is on the PlayStation 4 and it’s great. Matt’s review.

Alienation is a hugely enjoyable game, but it’s one that’s playing the ball a little too safely, and resting too heavily on the successes of games that have come before it. Ultimately I don’t think this will be remembered as a classic, and it doesn’t need to be; what Housemarque has created is a bit of fun with friends around, no more, and no less.