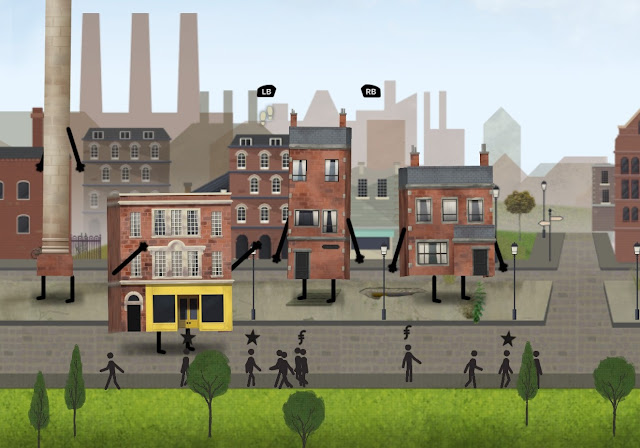 Buildings Have Feelings Too! is a simulator that will make you care not just about your population of people, but the buildings they live in too. In fact, buildings can walk, talk, have aspirations and run into trouble… and this game wants you to be very sad if a building needs to be demolished.

In development for PC, PlayStation 4, Xbox One and Nintendo Switch, Buildings Have Feelings Too! might just be the most original simulator we’ve seen in quite some time. It’s a brilliantly clever concept, too, asking us to pay attention to something we often take for granted in the genre. It’ll be a while until it released (Spring 2019, or Autumn 2019 for those in the southern hemisphere), but it’s already looking really good.

Details of the game from the announcement below the trailer:


As time progresses, new industries can be researched and new architectural marvels built. In turn, world events might cause buildings to fail and businesses to go bankrupt! Players must discover new ways to attend to their city’s needs. This could involve refurbishing a building or simply grabbing it by the hand and moving it to a nicer part of the neighborhood.

As players progress they are able to grow their city, allowing for multiple neighborhoods. Specialist areas, such as busy finance hubs or bustling theatre districts, become available. Additional layered attributes such as electricity supply, noise pollution and transport add more complexity and challenges for players.