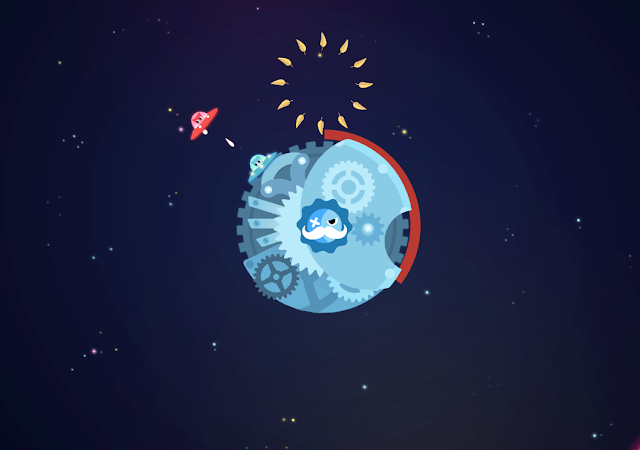 As I mentioned in my write-up of SMASH! 2018, one of the real highlights of the event for my mind was the gaming section. Every year this section has gone from strength to strength, and this year there was a huge range of really delightful indie games and booths set up, giving people a chance to play some of the stuff coming out of Australia.

There were two games that I wanted to highlight in particular as being real highlights, for the multiplayer hilarity that they offered; Beam Team and Boomerang Fu.

Beam Team is a charming little co-operative game where you and a buddy take control of UFOs, with the singular goal of blowing up the earth. To do that, you need the cycle around the planet, shooting downwards and slowly draining the planet’s “health”. Get the health all the way down and boom. Dead planet. 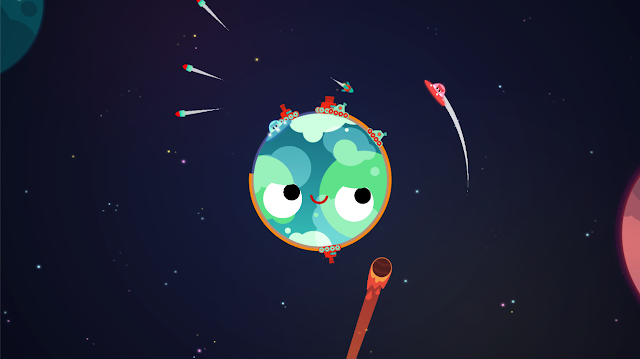 Of course it’s not that easy. The planet “spawns” defence systems which run around the surface firing missiles and the like up at you and your mate. A single hit is enough to bring you crashing to the ground, and if you both end up creating Area 51s on the surface, it’s game over. Luckily, you do have a beam that you can use to bring your team-mate back into commission.

Beam Team gets chaotic – and difficult – very quickly, and does very much feel like a reverse Space Invaders in theme. Myself and Matt (as in, the other DDNet Matt), gave this a couple of goes and failed miserably. I also played it with one of the developers of the team, and even failed then, with all his experience helping me out. Whether that’s because all there is to the game is a single (or small handful) of planets and therefore if it’s not obscenely difficult it wouldn’t last long, or whether it’s that there’s still some difficulty fine-tuning to go, remains to be seen.

Either way, though, the game is bright, colourful, and very entertaining. I’m not sure it would work as a single player game, but like some other recent releases (Overcooked, anyone?) it’s the kind of game that’s good to have sitting on the hard drive for when friends are around. Beam Team is currently available ont Itch.io, but the developer tells me there are plans to bring it to consoles down the track. Which is good, because a Switch version of this, with its handy two-player multiplayer anywhere, anytime, feature, would be ideal for this game.

Boomerang Fu is a game that I could see myself playing a lot. And I really do mean a lot. It initially seems so simple; it’s a basic top-down arena deathmatch in which you control a cute little food character, who is armed with a boomerang and melee attack, and you need to knock out opponents while being the last one standing. 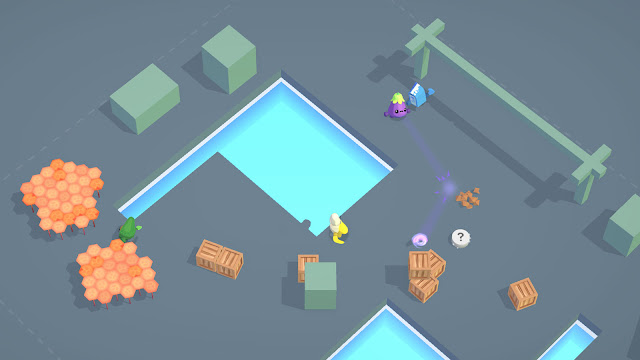 Because your projectile is a boomerang, you’ll throw it, and it’ll come back, which immediately opens the door to some hilarious trick kills – throw the boomerang, run around, and catch opponents unaware from behind. Most levels also have walls to hide behind and switches to flick, which allows you to “trap” your opponent’s boomerang if they’re not careful, leaving them in a very weak position.

After a few rounds, powerups start showing up too, with everything from split shots to exploding powers, and that further adds to the manic nature of the action. Already Boomerang Fu controls well and feels well balanced in those power ups, so that in the later stages, when each player was powered up differently, it still felt like a fair, exciting contest.

Playing this with a couple of the DDNet team – Matt and Harvard – really brought out the competitive streak in us, especially when a winner was determined across a large number of rounds, so we all had the chance to figure out who was in the lead and needed to be ganged up on by everyone else. It was also non-stop laughter, and the kind of game that absolutely anyone can get into. Boomerang Fu wouldn’t work in single player, nor would it work with online multiplayer, but that simple, colourful charm would also guarantee that it would be a local multiplayer party favourite.