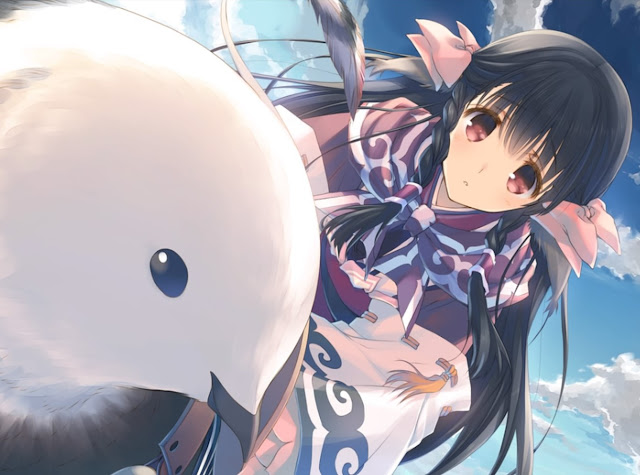 Back on the PlayStation 3 there was a rather interesting little game that came and went without garnering too much interest; but I found it utterly enjoyable. That game was Tears to Tiara 2 – a cross between visual novel and tactics JRPG, which in so many ways represented the best of both worlds.

Related reading: Tears to Tiara 2, released on the PS3, was from the same developer, and also well worth a look. Matt’s full review.

The developer behind that game, Aquaplus, is back with Utawarerumono, another cross between visual novel and tactics JRPG, for the PlayStation 4. Utawarerumono has more in common with Tears to Tiara 2 than just that, too. Both games share roots in Japan’s adult gaming scene. Before they were ‘legitimised’ with console games, anime adaptations and, later, English releases, both the Tears to Tiara and Utawarerumono franchises were rather heavy on the sex scenes, nudity, and other such things that you find in those game shops out in the back alleys of Akihabara (good shops, those).

It would be so easy to hear that description and immediately dismiss Utawarerumono as trash. After all, adult entertainment is rarely accused of being deep or nuanced. It would be easy to assume that, even when free of the X-rated stuff, the game would still have the kind of storytelling and fanservicey nonsense that more than a few Japanese adult games have… uh… underneath the surface. But Utawarerumono is not what you might expect. In fact, Utawarerumono comes so damn close to being a masterpiece at times that its background might even surprise some people who don’t realise that, yes, erotica can tell a good story too. 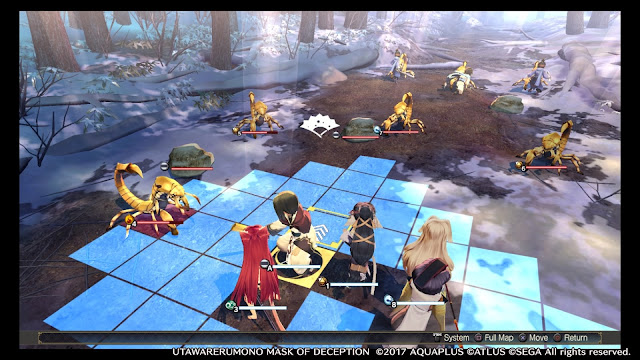 Utawarerumono thrusts players into the role of a human suffering from amnesia who wakes up to find himself in a fantasy world where everyone is basically human, but with cat ears and tails. Yeah, it’s catgirl central in this one. Physical appearance isn’t the only aspect where our fellow is different; all the cat people also happen to be physically superior to him, and it’s a hostile world indeed that he’s wound up in. Luckily for our amnesiac hero, he quickly meets with a group of good-hearted people who appreciate his intellect (even if his lack of physical strength mystifies them), and so he starts a grand adventure with his new friends, while trying to figure out just who he is and how he ended up in such a foreign world.

One of the first things I noticed about Utawarerumono was just how intriguing I found the setting. From the semi-tribal, or at best rural lifestyle that many of the world’s inhabitants share, to the way they dress, and the way the narrative and environment is supported with a hauntingly beautiful soundtrack that is folksy and traditional, there was an instantly appealing tribal theme running through Utawarerumono that was quite unlike so many other, similar settings.

And then I discovered that the story writers actually based the world and its characters on Japan’s Ainu indigenous people, and I fell completely in love with the game. For readers who aren’t aware, the Ainu were native to Japan, then northern Japan, and then just chilly Hokkaido – being steadily pushed northwards as the Jomon, whom we today recognise as the “Japanese”, slowly claimed dominance of the land. The Ainu held Hokkaido for the longest, but were eventually forced to integrate into the broader Japanese nation, and unfortunately, when they did, they became yet another traditional people who were treated absolutely horribly by the dominant culture. Official Japanese government policy was to eradicate the Ainu culture, and while it has survived – just – into modern times (and Ainu culture is no longer officially discriminated against), an awful lot of that culture is only preserved by the tiniest community of people. 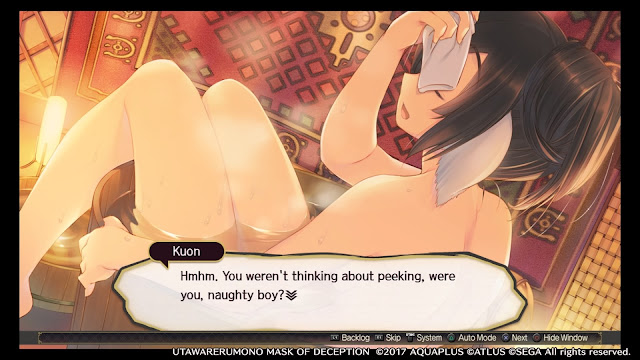 I’ve seen a number of documentaries about the Ainu culture and people over the years, and the thing that constantly strikes me about them is the understanding that theirs is a greatly aging population, and one that is losing younger generations to Tokyo where the jobs and modern, exciting, lifestyles are. This awareness has imbued the remaining Ainu with melancholia; an understanding that their traditions and heritage are fading, even as those who remain are passionate about who they are. To me, sitting at the other end of the world and with no connection with the Ainu at all, and at no risk of having my own cultural identity disappear on me, it’s difficult to imagine just how that must feel. What I see is a beautiful culture with amazing traditional clothing, art works, dance, and musical instruments, but I can only try to empathise with how it must feel to watch my culture fading with every year. The world will be a lesser place without the Ainu.

Related reading: For a VN/ JRPG cross that goes all-in with the fan service, Eiyuu Senki is the game for you. Also on PS3! Matt’s full review.

I have no idea how carefully researched Utawarerumono is, or how sensitive it is to the particulars of Ainu culture. I have no idea how the Ainu themselves would react to the story being told through this game, or if they were consulted at any point to make sure that the game properly reflects their culture and identity. We are talking about what was originally an adult visual novel, so I think it’s fair to say that the game to the Ainu is not what Never Alone is the native people of Alaska. But what is clear is that, even as the game features scenes where a curtain falls down while a beautiful anime girl is having a bath in full view of the male protagonist (don’t worry, there’s no full nudity – the pose is just right to hide the sensitive bits), at a broader level, the game is absolutely respectful of the tribal cultures that it draws inspiration from. And it’s a fundamentally positive story about the kind of lifestyle that these people lead. If this is the kind of game that can encourage people to learn a little more about Ainu culture – or even just appreciate that Japan does have an indigenous people – then it has done a really, really good thing.

And, again, in drawing inspiration from the Ainu, Utawarerumono really is the most beautiful game. Every new experience – a new location to visit, or character to meet – is worthwhile, simply because it’s just so elegant and stunning. You’ll be spending a lot of time looking at the character portraits and backgrounds because this game is, for the most part, a visual novel; but the setting and art direction is so fundamentally immersive that hours would pass and I’d not even realise I’d been playing for so long. I know that some people found the imbalance of dialogue and storytelling between battles in Tears to Tiara 2 to be a something of a deal breaker – especially when we’re all so used to our tactics RPGs being like Fire Emblem or Final Fantasy Tactics. On one level Utawarerumono is the same; you can easily go 90 minutes between battles, but I’m hoping people will be more involved in what’s going on so that they won’t even notice. 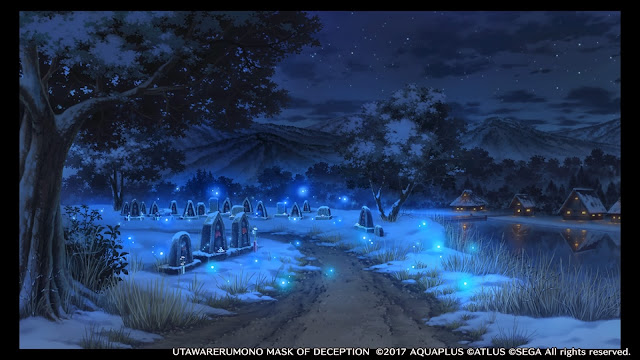 Something that has always impressed me about Aquaplus is the way it manages to make its stories very personal. Tears to Tiara 2 and Utawarerumono alike share narratives that feature some pretty epic, world-changing events, yet at the same time neither do they lose sight of the core relationship between the protagonist and his small crew of allies, particularly the various women he develops a relationship with. This is again a side effect of the game’s roots in being an adult game, no doubt. After all, epics are all well and good, but really people are there to see the guy and girl get it on in the tent after the battle. Stripped of the overt sex, what’s left is a story that is almost unsettling in its sentimentality and the depth of the relationships between characters. It’s oddly subtle and nuanced, and it’s really enjoyable to watch these relationships develop.

When combat does happen, it’s quite elegant in itself. Each battle plays out a bit similar to a game like Fire Emblem, where a small band of player characters slowly work through an enemy force by moving around a grid and making attacks in a turn-based fashion. As the game wears on, characters develop additional abilities to help make them more useful in combat, and there’s also equipment to play around with to try and develop the strength of your party; but it must be said that this combat system isn’t as deep as we’ve seen in other tactics games on the PlayStation 4, such as Dynasty Warriors: Godseekers or Disgaea 5. That’s not to say it’s a bad system – as I said, “elegant” would be the word I’d use to describe it – but people coming into Utawarerumono explicitly for the combat mechanics may find the experience not quite what they were looking for.

The reality is that in Utawarerumono the combat is there to support the narrative, rather than the standard tactics JRPG, where those roles are reversed. You’re meant to use these battles as an opportunity to better connect to each of the respective battle members by directly controlling them, and indeed most of the battles are built around one or two particular characters as a part of their narrative character development. For a spoiler-free example, when we first get to control a princess character in battle, it’s soon after she has been introduced as a story character, and that battle is used as a way of making it clear that, when the chips are down, this particular princess is a tough and determined individual (with an adorably irritating bird-mount to help her out). It’s one thing to have a battle for the sake of breaking up the storytelling and to give players an opportunity to earn some experience. It’s quite a step up to make the combat a core part of the storytelling experience. 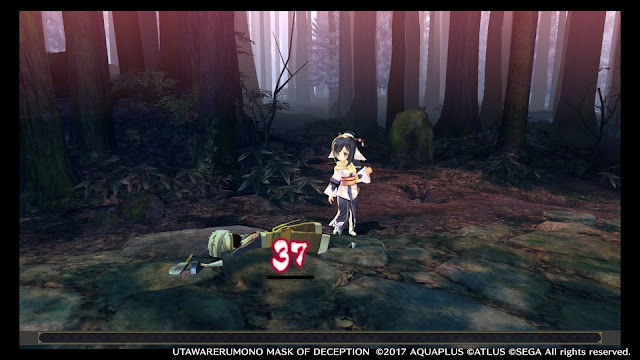 It’s quite unfortunate for the sake of the game that Utawarerumono just happens to come out in a rare period when there are a lot of tactics RPGs to choose between. Fire Emblem and Disgaea both have far higher profiles, and those respective games will get the bulk of the attention, but for something a little more beautiful than Disgaea, a little more humorous than Fire Emblem, and genuinely focused on the narrative, Utawarerumono is my pick of the bunch.

Related reading: For another tactics JRPG just recently released, there’s a new Fire Emblem on the 3DS, and it’s a great game itself! Matt’s full review.

Now if you’ll excuse me, I’m off to do some reading about the Ainu people.