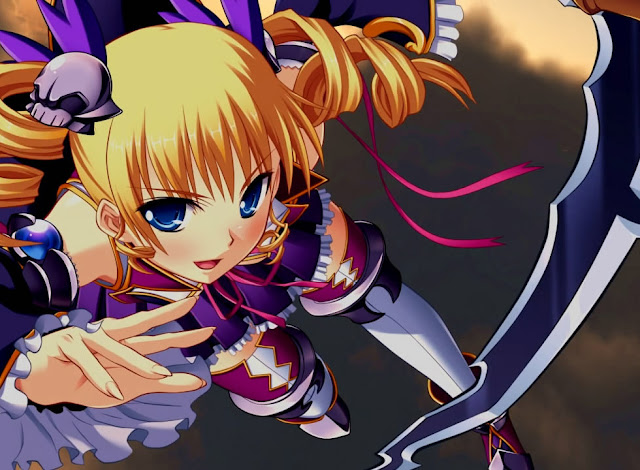 I can’t actually think of a fighting game that is more beautiful than Koihime Enbu. The impression that it leaves, before you even hit that first button, instantly marks this brawler out to be something special indeed.

DigitallyDownloaded.net was provided with a copy of this game for review by Play-Asia. If the game is of interest to you, please consider supporting us by buying a copy through this link!

It’s based on the Three Kingdoms era of Chinese history, in which the various legendary heroes of the time duke it out in one-on-one combat. That in itself is an appealing concept, but Koihime Enbu comes with the caveat that all those male heroes which dominated the battlefields of the time have been replaced with an attractive bunch of girls. That’s right, it’s one of those games.

There’s some light fanservice as you might expect from a Japanese brawler with an all-girl cast. Most of that fanservice is in the costuming, which would not be particularly appropriate for a battlefield (to say the least), but it’s also fairly restrained on the overt sexualisation. Beyond a few panty flashes (and the game runs at such a pace you’re not likely to notice those anyway), Koihime Enbu is not the kind of game that you’ll need to hurredly shut down when someone enters the room.

I am so pro with the girl in white. New favourite fighter! #PS4share https://t.co/iq2g4WFtF6 pic.twitter.com/W43HXB3WxE

And it is absolutely gorgeous. The backgrounds are stunning in the level of detail that has been worked into them. They’re static, so lose some of the vibrancy that we see in some other modern 2D fighting games (BlazBlue, for example), but they have a painterly quality that is pleasing to the eye, and they make good use of the entire play field. Some 2D fighting games have backgrounds that have “dead spots”, where the background is uninteresting or repetitive. But not in Koihime Enbu. Oh no. I was frequently moving around each stage just to manipulate the action so that the fighting took place across the entirety of it.

As gorgeous as those environments are, they pale in comparison to the sheer beauty in the way the characters are animated. The fluidity and perception of speed on display is so incredible that I’m still unsure how the developers actually managed to achieve it. Each character has a very distinct moveset to one another, which creates a great deal of their personality, and the way they transition between them as they string together combos, with never a frame of animation dropped, is slick stuff indeed. There’s plenty of spectacle on show, too, with the most complex combos and biggest damaging attacks having a real visceral drive behind them.

I wrote “perception of speed” above, because as pacey as Koihime Enbu appears to be, I found the timing required to string combos and react to moves taken by opponents to be far more reasonable than in some other fighters that I’ve messed around with. It might simply be the case that I’m slowly getting better with the genre, and moving past the point where I simply enjoy the design of the games to being able to engage with them as games, but given I still get comprehensively beaten by my wife in most battles, I don’t think that’s the case.

This is seriously such a beautiful fighter. That animation. Wow. #PS4share https://t.co/iq2g4WFtF6 pic.twitter.com/AjsciIb7Ae

Rather, I think it’s simply that the developer of Kohime Enbu understands the timing and ebbs and flows of combat beyond most, and has carefully worked its systems to allow battles to be an delicate dance that rewards both aggression and conservatism in equal measures. This is certainly one of the most graceful and fluid fighting games I’ve played, and it deserves real respect for that.

Combos are also relatively easy to pull off, and even in my hands I was doing some impressive strings with a couple of characters after just a couple of rounds practice. There’s still plenty of training for more serious players to grind away at, because learning how to effectively time these attacks, and when to back off or counter an opponent’s own plays is a challenging learning curve, but it’s a nice feeling to feel that you’re doing something impressive almost from the outset.

As is standard for the modern fighting game, there are a lot of different modes and options to work through, but the key ones are the story, online and local versus modes. Obviously you’ll need to know Japanese to get the most out of the story, which at least tries to be more than token, as we have seen in other fighters. Characters do take the time to have conversations of sorts before they battle, and without that context you’re not getting the full experience. That being said, Kohime Enbu is also not BlazBlue, which genuinely wants you to spend time with the story, so this one is import friendly enough to be worthwhile. Both multiplayer modes work as well as you’d expect for a fighting game that relies on utter precision and smooth gameplay; the game developers really took the time to get this stuff right. 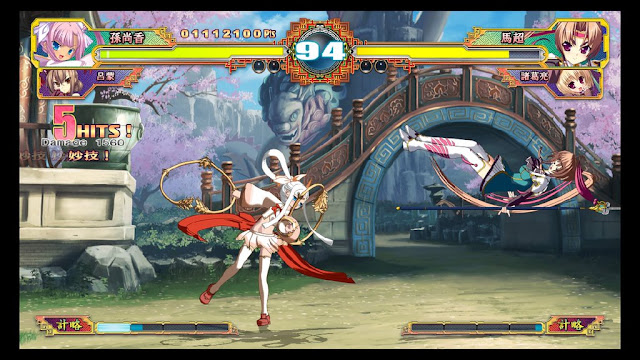 Perhaps most impressively of all, Koihime Enbu’s heritage is in actual adults-only gaming – it’s an off-shoot of the Koihime Musou series. Which is like making the jump from pornography to mainstream films; it happens, but not often, and even less frequently does it do so well. I haven’t played the predecessors that lead up to Koihime Enbu, so I can’t speak to their quality, but generally adult games might have good ideas, but are constrained by budgets that are, often as not, focused more on creating images of attractive girls in undress or in the act than the game side of things. Eiyuu Senki and Tears to Tiara are two examples of franchises that were good enough beyond the sex content to be rebuilt for consoles that don’t allow such content. Koihime Enbu takes things one step further – it’s a good enough franchise for the characters to be used in an off-shoot series for a general audience.

Whether this game gets a localisation or not depends a great deal on whether XSEED, NISA or Aksys needs a game to pad out the release schedule, I suspect. I wouldn’t hold my breath on it – this isn’t like games like Nitroplus Blasterz with a cast that is already known, albeit niche, in the west beyond the adult gaming space. This one would be niche beyond niche, which is not to say it won’t happen, but I recommend fighting game fans picking Koihime Enbu up on inport, so they’re not missing out in waiting for a localisation.