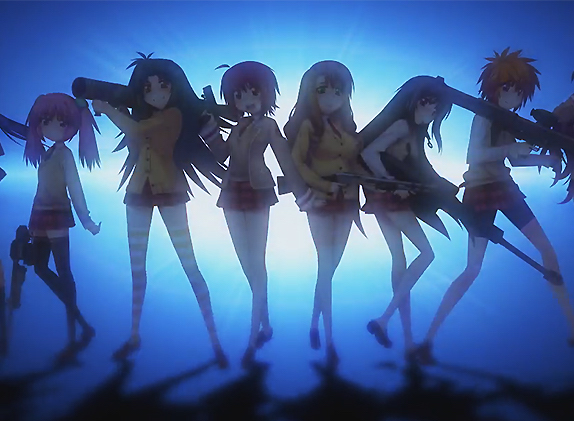 Now we’re talking. Here’s a shooter I can get on board with. Nathan Drake’s got nothing on the girls of Bullet Girls 2. Now, I can’t see this game ever getting an English localisation, but whether you’re able to understand the narrative or not, if you are interested in the idea of a distinctive, entertaining shooter with a spot (okay, massive dollop) of fanservice, then you really owe it to yourself to import a copy of Bullet Girls 2, because it is fun.

A copy of this game was provided to us from Play-Asia for review. If the game interests you, then please consider picking up a copy via this link to support DDNet.

On a basic level, it’s a third person shooter. You take control of a girl that carries with her an arsenal of weapons, and you run around arena-style levels shooting other girls. It’s an all-girl cast in this one, and the reason for that becomes really apparent, really quickly.

In most shooters, once an enemy takes a couple of bullets, they spurt some blood, curse a little, and then fall over, dead. Hit them in the head and it might explode. That’s fun, or something. But in Bullet Girls 2, when you shoot an enemy, the clothing on the bit of her body that you just shot tears off. You also get a second-long cut scene of the girl in a fanservicey position as the material tears. Girl’s bodies are broken down into a number of different hit zones; shooting her in the arm causes a sleeve to tear, and that’s mundane enough stuff. The real money shot is when you deal enough damage to her chest, stomach, and abdomen to reveal her bra, stomach, and underwear. That’s where the really fanservicey bit cuts in – just in case that wasn’t obvious. 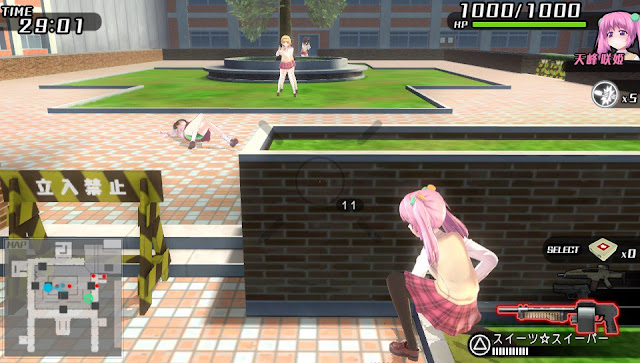 But wait, it gets better! If you manage to systematically destroy each part of a girl’s clothing across her body, the final mini cut scene shows her completely naked. There are tiny wisps of cloud covering the spots that would get the game barred from a release on a Sony console, but the effect is clear; you’ve shot the clothing off a girl.

Not even Nathan Drake can do that.

The entire game is based around this premise, and it makes compromises to the way it plays to enable as much material ripping and exposed flesh as possible. The AI, for example, has a habit of standing around, out of cover and perfectly still, in to provide you with the opportunity to carefully take aim at the bit of the body that still has some tatters hanging on. Enemies also tend to come in smaller numbers, because otherwise you’re too busy focusing on whittling down the numbers to worry about stripping any one of them down. Where other shooters try to make the action as sustained as possible, this game is all too happy to suspend heated firefights to show those cut scenes of tearing material.

Coupled with some genuinely irritating gameplay choices (the cover system doesn’t allow you to shimmy across from side to side – the only way to move once in cover is to break cover), and it would be difficult to argue that by conventional standards Bullet Girls 2 is a fine example of the shooter genre. But it’s actually quite clever. We’ll come back to that in a second. What’s important for the moment is that once you’re comfortable with the more irritating quirks, odd pacing, and alternative focus of the action, the guns themselves actually feel good to fire, moving around levels is easy, and they’re well designed to give players some freedom in how they tackle them. There’s also neat little features, such as the ability to duck out of the way of enemy rockets. And while it might not be a refined example of shooter action, Bullet Girls 2 is the most unique shooter you’ll ever play, and that’s surely appealing and worthy in its own right. 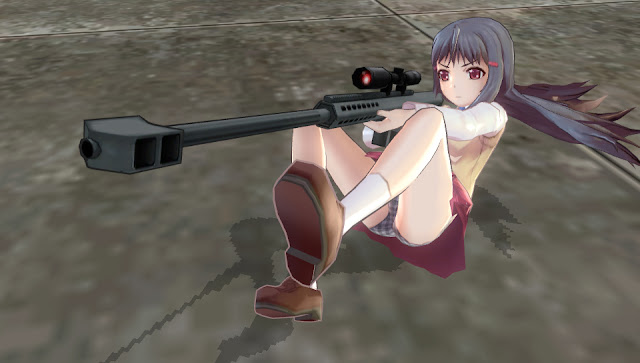 It would be very easy to criticise the game as trashy exploitation, of course. This is especially true if you also haven’t got the context of the narrative (which, in truth, doesn’t actually do much to contextualise the action). For example, Bullet Girls 2 can also be seen as an example of the male gaze in action. The developer, Shade, wisely included no male characters in this one (because that would have spun towards sexualised violence if there was a male character running around forcibly removing women’s clothes with a gun, and that’s not cool), but there’s undeniably substantial objectification that occurs in this game, and it’s perfectly fair to highlight that, too.

But (and here we go, I’m about to launch into a defence for yet another “perv” game)…

Bullet Girls 2 is really quite clever, because it speaks to a theme that I’ve been writing about for years now; it completely inverts the shooter experience to wholesale replace extreme violence with extreme sexuality, and then kicks back to watch the fallout. Over and over again I’ve highlighted that games that make violence core to the experience enjoy a very different response from critics and the community than games that make sex content the core experience, and if Bullet Girls 2 was to be released in the west, I think we can all agree that based on precedent it would be torn to shreds by the community and critical body. This game is, in a pure, distilled, interactive form, that same discussion I’ve been having in comparing the different responses that people had to Dead or Alive 5 and Mortal Kombat.

Despite its name, Bullet Girls 2 is not violent. Characters don’t die when they’re shot. They fall over, knocked out (one assumes from the embarrassment of being stripped in public), and that’s it. There’s no blood. No reward for headshots. Instead, the rewards are earned by making skilled shots to the crotch, and the only visual damage done being done to the skirt. And where all other shooters construct their gameplay around the violence – for example, throwing stealth sections in to allow players to slaughter enemies quickly and efficiently, or turret sections to allow slaughter at scale – Bullet Girls 2 simply doesn’t need these features. Its goal is to enable the sexualised content, and its systems – the ability to dodge get close to the enemies and dodge rockets, for example – are built around being able to patiently and systematically target multiple areas of each individual character. There’s even a lampooning of the torture scenes that are so common in military shooters – in Call of Duty you see a lightbulb shoved in a guy’s mouth and then smashed. In Bullet Girls 2 an interrogation scene looks more like the kinkiest lingerie party you can imagine, and you’ll be poking girls in… places, feeding them bananas, and playing with them with all kinds of kink toys, and that is hilarious. 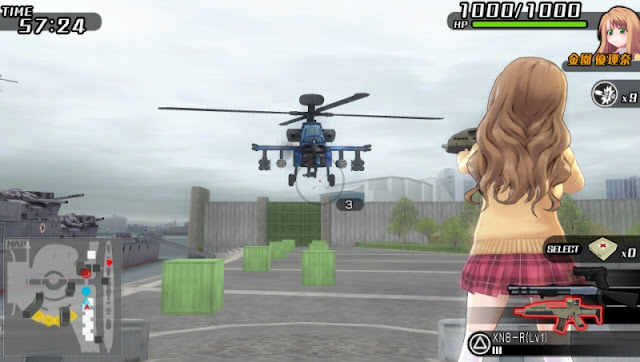 So, if Uncharted 4 is the pinnacle of shooter-as-violence, Bullet Girls 2 is every bit as proficient in achieving its almost unique concept of shooter-as-sex. Knowing the differing responses that these two games would attract, despite both being spot on in terms of both design and implementation for what they are looking to achieve, is a metatextual commentary all in itself.

In terms of production standards, Bullet Girls 2 is somewhat constrained both by hardware and budget. Levels feel too much like levels, though the argument can be made that the non-violent nature of the gunplay speaks to a paintball-like theme, and from there the artificial construction of levels would then fit with that theme. Environments are also intensely functional in design; you’ll be looking and boxy arenas that are coloured very basically indeed, and arbitrary placement of objects to use for cover that don’t do much for the environmental storytelling.

That said, it makes sense that the bulk of the graphics budget would instead be spent on the girls themselves. The character models are as fine as you can expect to see on the PlayStation Vita at its best, and the tearing clothes effects are suitably sexy. Shade shows a masterful understanding of underwear designs and patterns that is only bettered by fellow exploitation masters, Tamsoft; the girls in this game have some varied and quality tastes in lingerie. I badly want to see a PlayStation 4 edition in this series, though, just to see what the developer could come up with if it had greater resources to hand. 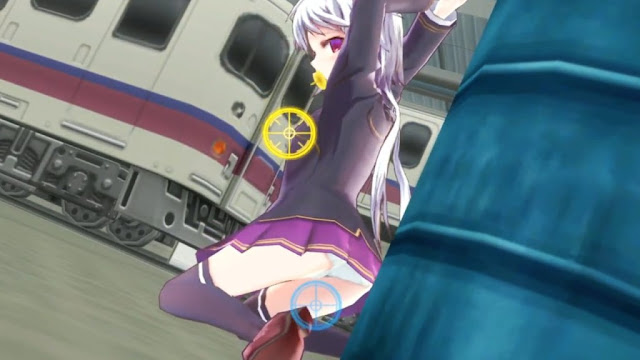 That conversation that this game can generate – the contrast between how we respond to violent games when compared to sexualised games – is by itself a good reason to pick up this game. Bullet Girls 2 will challenge you more than you might think it will; not because it’s a difficult game (because it’s really not), but because, no matter your tolerance (or enjoyment) of fanservice, you may well feel uncomfortable playing this game in places. In examining where that discomfort might come from, Bullet Girls 2 really will bring into sharp focus that people do have different responses to extreme examples of these thematic materials. And in challenging you, if you are one of those people that have automatically assumed that sexualised content in games is “problematic,” you may just start to question those assumptions that you’ve been making.

By no means is Bullet Girls 2 a standard shooter. But in the most formulaic and generally uninteresting genre of them all, that this game has found a way to be so different genuinely makes it worth a look. And, yeah, it dials the fanservice up to 11. And beyond.

The Friday Ten: Ten games the Nintendo NX needs on it, or it is doomed