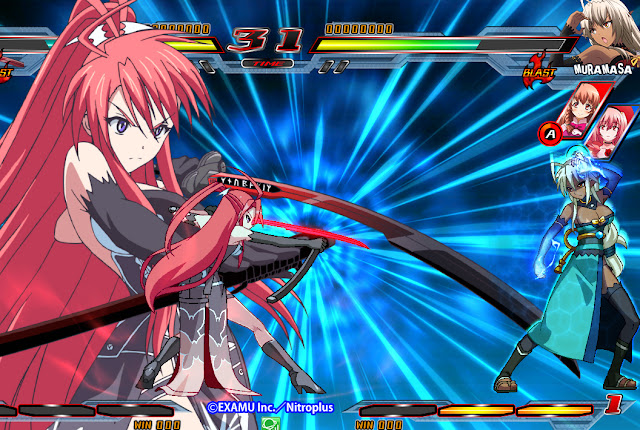 I’m struggling to think of a more niche example of a character mash-up fighting game than Nitroplus Blasterz: Heroines Infinite Duel. That’s not a criticism of the game, but the idea of bringing together a bunch of characters from the work of one developer that pushes out games that are extremely niche at the best of times, makes for a game whose existence itself is a surprise.

Related reading: BlazBlue on the PlayStation 4 is really hard to look past for 2D fighting action. Matt’s full review.

I mean, one of the most recognisable characters is from an adult (as in sex and nudity) horror visual novel. This game doesn’t go those places, but it should give you an idea on just how obscure the characters are. And, as with most character mash-ups, the more you are familiar with the cast the more intrinsic value and mileage you’ll get out of it. I’m not familiar with all the titles that have characters drawn from them in this game, for example, so I naturally found myself gravitating towards Saya (as in, the girl from the aforementioned adult visual novel – Saya no Uta… as an aside do not play it unless you’re 18+, kids, but if you are then oh my God, play it because it is so much more than the smut you might expect), and Saber from Fate/Stay Night, as the two franchises I’m most familiar with.

As the name suggests, the character roster is female-only, which will usually throw up red flags for those averse to fan service, as it does generally mean… well, fan service. This one’s really quite reasonable on that end of things. In fact, from the eye for detail that you’ll see in each character’s movement, and the way their attacks and victory animations so cleverly reflect their personalities, it’s easy to imagine that the people at developer, Examu, are genuine fans of Nitroplus’ franchises, and there’s a lot of care and respect that has gone into the game’s design.

Attack from behind. Not very noble, Saber #PS4share https://t.co/JVvSSMqsnp pic.twitter.com/Hc5OWV5Ja8

That being said, Blasterz relies very heavily on players being familiar with these characters. The “story” mode only really offers a couple of sentences of dialogue between key combatants immediately before their fights, and gives you absolutely nothing to latch on to in terms of characterisation. And I know that this is a fighting game so in-depth narrative is not meant to be essential to the game… but frankly it is. Having played BlazBlue, Persona 4 Arena, and even the deconstructionist narratives within Mortal Kombat and Dead or Alive 5, I simply do not accept the premise that a fighting game is incapable of throwing together an interesting narrative. There’s a whole pile of niche little 2D fighters that get localised out of Japan these days that simply do not bother with narrative at all, and while I appreciate that the teams working on these games are smaller than on the big guns, I think some basic narrative writing talent would be a sound talent acquisition for these teams to make when they next hire. Far too often I find myself struggling to find context to care what happens in these games, and Blasterz is no different there.

But where that lack of narrative context has really hurt my mileage in some of the other fighting games, I can forgive it in Blasterz, because I found the core fighting action to be really engrossing stuff. As with most 2D fighting games out of Japan, there’s a great deal of depth to the combat system, and I’m not going to pretend I’m even close enough to good at this kind of action to be truly competitive, but there’s a couple of things about this one that I really appreciated:

Firstly, the action is slightly more methodical than some of the other 2D fighting games I’ve played in recent years. It’s still fast and frenetic, but I felt that button mashing was discouraged simply because it was too easy to counter with a well-timed response. And there were simply too many different options that were accessible even to people who hadn’t memorised the combo systems to disrupt players that were simply slamming buttons and hoping for the best. 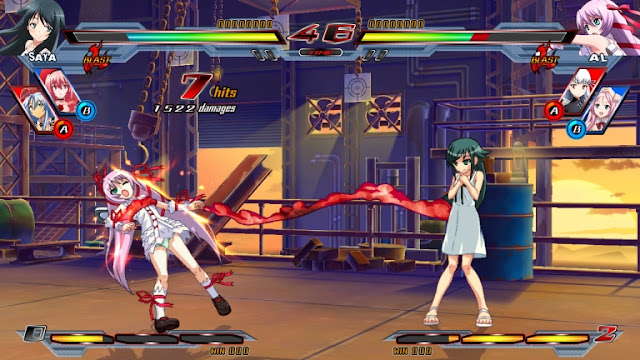 And, while I’m not going to guess at how the competitive scene might turn out, the characters seem to the layperson to be well balanced enough with one another that none of them seemed to be dominant. Playing in local multiplayer with my wife, we were both able to win matches with each of the characters, and as we’re fairly well matched when it comes to skill in 2D fighters, I generally consider that a good sign of balance.

There was also a lot of depth behind the support characters to balance things further. You’re able to take two support characters into each round, from a mix of those with defensive and offensive capabilities. Though you’re realistically only going to get to use each of those characters once per round, they are capable of turning the tide of a battle, and can be used to hide the main character’s weaknesses to an extent. For newcomers, Blasterz helpfully suggests which supports to bring in, though as your skill level grows, you’re probably going to want to experiment with these yourself.

Perhaps because the developers wanted to maintain control over the balance between characters, or perhaps because the character mash-up nature of this one meant there simply wasn’t enough base material to build an expanded line-up, but the roster is very thin in this title. People who have been getting used to the expanded size rosters that we see in the mainstream fighting games might be disappointed to see so few options, but the good news is that each character feels utterly distinct to one another. Actually building up a base skill level with each character is going to take plenty of work. Mastering any of the characters is going to take real commitment, and you’ll need that for both the online play (where, as you can expect, the community is small but boy are they committed), and the various single player modes (because the AI does not hold back when the difficulty is ramped up). 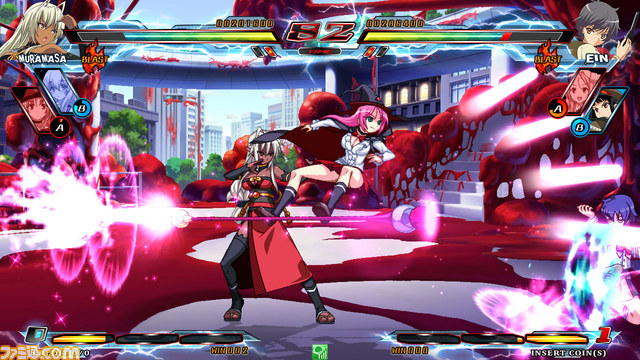 Without much of a narrative mode to enjoy, the push is definitely towards getting players into the online competition, and naturally the long term longevity of Blasterz will depend greatly on just how long this community can remain robust. I found the netcode to be excellent and with the game’s underlying systems being so skill-based, I do give this every chance of building up a stable community of committed players. Just make sure you’re up for that particular challenge before taking it on. It can be disheartening to be beaten as bad as I was in my first few forays into the online modes.

I really enjoyed this game. It’s not quite on the level of the fighters I really love (that being Dead or Alive and BlazBlue), but I can see myself coming back to this one fairly often. And, unusually for me, I’ll be coming because I enjoy the combat system; usually I’m looking for character, personality and even narrative in my fighting games. This one doesn’t do any of that particularly well, but that combat is just too satisfying to resist.