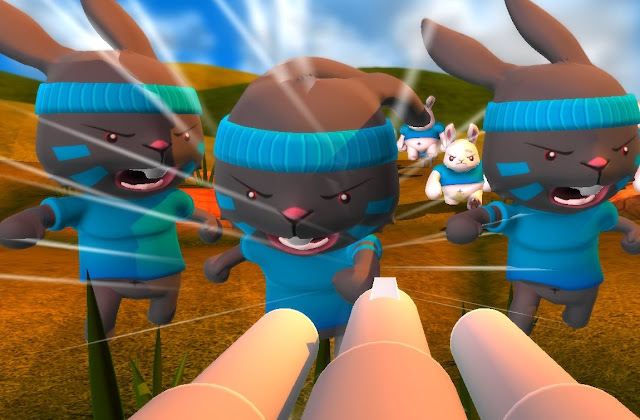 Way back before the PlayStation 4 was released, in my first hands-on time with the console, I got to play an early build of Blast ‘Em Bunnies, the next game in the works from Aussie developers, Nnooo.

Blast ‘Em Bunnies is a fast-paced, arcade action game. Players play as a stationary gunman, fighting off hordes of crazy, nasty, adorably cute bunnies that are attacking in a full 360 degrees around them. So imagine the turret sections of most modern shooter games, and then make it cute. That’s Blast ‘Em Bunnies.

The game has been in development for some time now, and had already been confirmed for PlayStation 4, PlayStation Vita and Nintendo 3DS. Nnooo has used the opportunity of E3 to also announce the Xbox One version.

“It has a cartoon style but there’s also a hint of darkness about the game which makes it less cutesy than people might expect. It’s our first time on Xbox and we’re excited to finally bring one of our games to the platform.”

There’s still no firm release date, but Nnooo is promising us that it will launch at some point this year. New gameplay trailer below!

Trailer: Unravel; the game of E3 (so far)