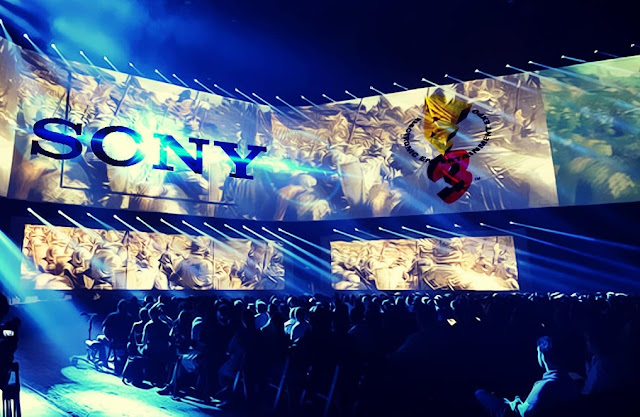 Microsoft had one of its best shows in years, showcasing both games and some mighty impressive technology. So how will Sony respond? Will it be all games, or will we even get a sneaky hint of a new hardware device? Say, a new handheld to replace the “legacy” PlayStation Vita?

Our full wrap of the big show is below. Be sure to let us know your own thoughts in the comments, as I’m sure there will be a lot of opinions flying around regarding Sony’s counter to Microsoft this year!

And first up is… THE LAST GUARDIAN

My God. I had written this off as vaporware. I thought it was over. I had given up on it. It was the greatest tease in the history of games. But there it was opening Sony’s show. Just like that Sony won E3. There’s nothing anyone can do to beat this.

This is why all the other publishers leaked their games early this year. They knew Sony had this in its pocket and they were rightfully terrified by it.

Next up comes Killzone’s developer, making a game that’s actually interesting for a change. Who would have thought? It’s magical. It has robotic dinosaur things. It has a female protagonist. it looks like it has a satisfying open world. It has awesome music.

No release dates or anything like that, but watch that one very closely.

Next up is a game from IO Interactive. That means Hitman. It’s been a while since the last Hitman, so we were due.

Also no real details about the game beyond a cinematic trailer, but we know what we’re getting in Hitman, and no doubt we’ll get more of that here. There will be a digital first release of this game, and there will be exclusive content for PlayStation

Next up was No Man’s Sky, with the developer getting up on stage and talking about their massive project. In a bit of showmanship, he showed us the scale of the universe, complete with thousands of stars and solar systems, each with their own ecology to explore.

While the game’s goal is to get to the centre of the universe, it’s quite obvious that the game developer wants you to get distracted, and exploring places on the way. Every planet explorable, different, and vibrant. No Man’s Sky may just be the biggest indie game ever developed, and Sony’s backing it big time.

Still no release date, but the developer did promise that it would be announced “soon.”

Media Molecule got up on stage next to talk about its new game. Another exclusive, of course, and this one is unbelievably beautiful. With an art style sitting somewhere between impressionist and realist art, and clay animation, this game promises to be a real toybox.

People will be able to collaborate on what Media Molecule calls “interactive paintings,” and while it’s a very abstract concept to describe, seeing it in action is breathtaking stuff. Creativity to the max and all that. You can make performances, paintings, music and more.

More to share at Paris Games Week. As befits a genuine arthouse game.

Activision then took the stage to show us what’s coming next in Bungie’s Destiny franchise.

The new content lands on September 19. It has new maps and loot and stuff. It’s called The Taken King.

Just to show the PlayStation also has the blocbusters, Sony also took the opportunity to show off the upcoming Assassin’s Creed game. Just like we saw in the Ubisoft show, it’s set in Victorian London and that means lots of English accents and perhaps, just perhaps, a Jack the Ripper-like character shows up somewhere.

The PlayStation 4 version will have extra content exclusively called “The Dreadful Crimes.”

World of Final Fantasy wasn’t the only Final Fantasy announcement here. Square Enix also showed off the very serious Final Fantasy VII. Not just a port either, as many had assumed. This is an actual full remake.

Note, this one is coming “first” to PlayStation 4. It will not be exclusive, though we don’t know if that means it’s coming to Xbox One or PC, or what.

Four Devolver Digital PC games will be making their console debut on PlayStation 4. These are massive game announcements, but they continue to represent the breadth of content that’s available on the console.

Coming to PlayStation 4 and PC, Shenmue has launched on Kickstarter and is looking for people to fund it. The game isn’t actually going to happen unless it gets funded of course, and Yu Suzuki and Sony took the stage to launch the Kickstarter.

Watch as this game gets funded within days, if not hours.

Batman comes in a matter of days, and so the cinematic trailer for the game was a low point for the show. Only because the show also literally included Shenmue III, Final Fantasy VII and The Last Guardian.

It’s available on the 23rd of this month.

Time to show off some hardware. Sony’s been working on Project Morpheus to compete with Oculus Rift in the VR space, and started by touting the multiplayer experience that the device will enable. Players will be able to participate in the VR world of their family and friends by picking up a controller.

And after that came some PlayStation Vue cable service. Relevant only to the US audience, but it was met with a massive ovation. Seems like some more competition in the cable space is a welcome announcement for our US friends.

Sony actually managed to secure Activision’s support away from Microsoft for Call of Duty, and Activision announced Black Ops 3 on the Sony console for the first time.

Obviously this is a major win for Sony if Sony can become seen as the “default” platform for Call of Duty.

This time around there’s co-op through the campaign, so players can work with three friends to take on the story missions. That’s better than dealing with the AI “assistants” of previous CoD games, that’s for sure.

Oh, this one has female fighters, don’t forget. It’s good to see Activision is finally doing the equality thing.

All map packs will be first on PlayStation 4. The multiplayer beta is also first to PlayStation.

There will be new play sets that allow players to relive iconic moments through the Star Wars films, and then also play some new episodes that fill in gaps between the films.

Limited edition 3.0 starter set exclusive to PlayStation platforms. Content will be available a month ahead of other platforms under this deal.

Boba Fett miniature will also be a timed exclusive to the PlayStation limited edition set.

We also got another look at EA’s Star Wars Battlefront. Nothing we hadn’t already seen or learned about in the EA presentation.

And naturally the closing game is Uncharted. Easily Sony’s biggest franchise is also its most technically impressive, with truly lifelike art and character design.

There was a technical hitch that meant the demo needed to be restarted, (and that’s very unfortunate given the quality of the rest of the show), this game is going to be a megahit exclusive that will sell millions of consoles by itself, surely.

There were no details given, just a very extended gameplay demo. I think that was enough to whet people’s appetites though.

Trailer: Blast ‘Em Bunnies is coming to Xbox One

Trailer: Yes, Shenmue III is the sequel you’re dreaming of and you can make it better