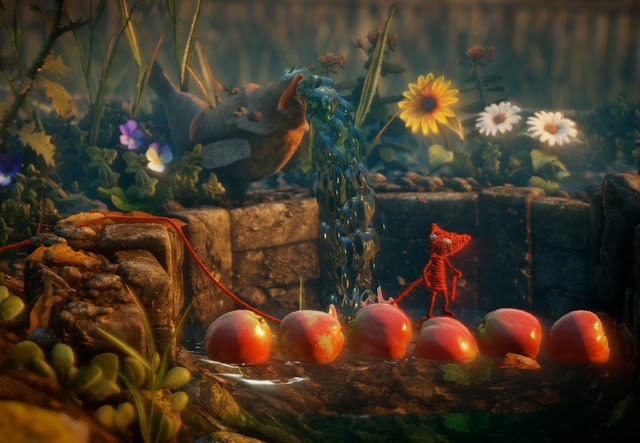 Obviously we’ve seen a lot of big blockbuster games through E3 so far, from Assassin’s Creed to Fallout, Halo to FIFA. But as far as I’m concerned, it’s a little indie platformer that’s winning the show (at least, as far as games from the presentations that have already been completed are concerned).

Unravel is a clearly heartfelt and emotional little game, staring a little yarn fellow called Yarny. Yarney’s on a journey through northern Scandinavia, and because he’s so little, everything around him is so big.

Just reading the way the developer describes this game, it’s quite obvious that it’s a meaningful little experience, that has had a lot of genuine thought put into it:

“The idea of Unravel was created from a very personal place. We didn’t start out by saying we’re going to make a puzzle platforming game. We started by thinking more about our lives, and the things we hold meaningful. We wanted the game to have a heart and the gameplay could always be designed to represent that,” Martin Sahlin, Creative Director at Coldwood, said. “The tale of Unravel is about love, and the bonds between people. And the yarn is a representation of that. Yarny’s red thread is the tie that connects everything in the game, from the gameplay mechanics to the story, and the people in it.”

The game itself is a physics-based puzzle platformer, made by a small team of around 14 people. I’d expect it to be of a similar standard and quality of games like Never Alone.

The trailer for the game is something special, too. It’s emotional stuff, I’m quite happy to admit I teared up a little.

Trailer: Blast ‘Em Bunnies is coming to Xbox One