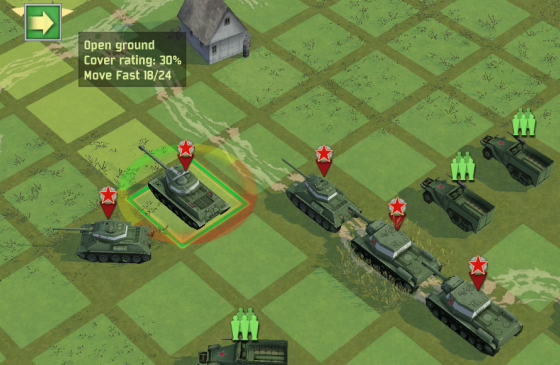 Why such unseemly haste? It’s because the Humble Weekly bundle has been taken over by Slitherine, long time favourites of the DDnet crew and a leading publisher of proper thinky games. As I write this, there are around three days left to snag yourself a war-strategy-historical bargain.

Still here? Well, I suppose you might need still some convincing. Over the last few years, Matt and I have reviewed and enjoyed many of the games in the bundle, so we thought we should let you know that you can currently get them for the low, low price of cheap. Here’s a rundown.

The Humble Bundle lets you set your own price, so you can get the first four games for a single US dollar. The undoubted star of this entry level-tier is Battle Academy. It’s a tense, easy-to-play wargame with tons of explosions and loads of content. Matt gave it 3.5 stars for PC and 4.5 stars for iPad, and we’ve both sunk many, many hours into its superb single and multiplayer modes.

The remaining games in the first tier are a mixed bag. Frontline: Road to Moscow is a competent Panzer General clone (we scored the iPad version at 3.5) while Rise of Prussia: Gold will introduce you to Ageod’s highly-detailed (but, to my mind, fairly daunting) grand strategy series. The entry level concludes with DRM-free and Android versions of Conquest! Medieval Realms (3.5 stars).

But there’s no need to be stingy. At the very least, you should pay $6 so that you get the Steam versions of Hell and Qvadriga as well. The latter is a quirky chariot-racing game, and Matt raved about it so much that I went out and bought my own copy purely on the strength of his review (4 stars). We disagree slightly on Hell; it’s essentially a fantasy re-skinning of Battle Academy, but I suspect that I liked it more than our esteemed editor did (3.5 stars).

The final, $10 tier of the bundle contains the best game by far. Close Combat: Gateway to Caen is an absolute belter. It’s the latest game in a venerable series, and it delivers real-time combat on some of the best maps that I’ve ever played. It’s like Command and Conquer with proper tactics. The graphics aren’t the flashiest, and series veterans will be well versed in the strategies needed for success, but it’s gripping from beginning to end. We haven’t reviewed it formally, but I’d give it a 4.5. It’s great.

Hopefully that’s given you a taste of what’s on offer. We don’t usually feature bundles, but this one really got our juices flowing. Just to be clear, all of the keys are for Steam, even though some of the reviews I’ve linked are for other platforms. But go and check it out. Now. Time’s a-tickin’, people.

Review: The Swapper (Microsoft Xbox One)