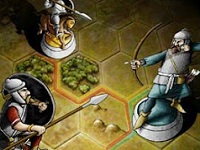 The Lordz Game studio is one of my favourite game developers. These are the guys behind the rather excellent Panzer Corps, and the Commander series of games that has appeared on everything from PC to Nintendo DS.

Consistently, Lordz produces wargames that are a nice mix of accessibility and depth. Accessible wargaming, if you will. So it was with some excitement that I booted up its first iOS offering, Conquest: Medieval Realms, especially after its long time publisher, Slitherine/ Matrix Games, did such a great job with the last game.

Imagine my disappointment when I discovered that this isn’t really a wargame at all, then. Yep, everyone, we’re still waiting for the first real grand strategy game to hit the iPad. That’s not to say that Conquest is a bad game, because it’s a fun little board game, I just went in expecting a bit more than what I got.

The game is one of pure conquest, with victory coming once your little red army occupies 80 per cent of the level’s hexes. This conquest is achieved by recruiting soldiers and using them, like pieces on a chess board, to occupy neighbouring territories. There are three classes of units – infantry, archers and cavalry, and predictably there is a “weapon triangle” at play – infantry beats cavalry, cavalry beats archers and archers beat infantry. On top of that, there are three “levels” of unit within each class. Level 2 units will beat all the other level 1 units, as well as the level 2 unit that it has the advantage over. Level 3 units of any kind will beat it though.

There’s some basic resource and nation development mechanics to navigate through as well. There’s economic buildings (supply the capital to recruit more soldiers and pay the wages of the existing ones) military buildings (you’ll need an archery range before you can build archers) and defensive fortifications (which prevent opponents from capturing your hexes). 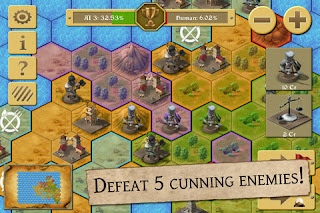 The strategy of the game itself is to build as many resource buildings as possible to get a big army of high level units in play, and then use those units to carve up the hexes of the opponent’s territories. The game utilises a very basic supply-line mechanic – if a territory is split in two, the two territories can no longer supply resources to one another, so the key to success in the early stages of the game is to develop a large, stable core territory.

Unfortunately this is one of those games that about halfway in victory or defeat becomes inevitable. Because there’s no terrain effects, no weather effects, no provision for chance to help or hinder your strategies and no real way to outmaneuver the opponent, he who has the most resources controls the flow of the game. The AI opponents are also simpletons and very predictable in their actions, which doesn’t help further the game’s case. Inevitably each and every game becomes a grind. Which is where the second problem comes in – there doesn’t seem to be any way to save a game mid-game. Considering a smartphone or tablet game is designed around pick up and play style games, it’s inexcusable that there’s no way to suspend a game mid way, especially since games do have the capacity to run on for a while. 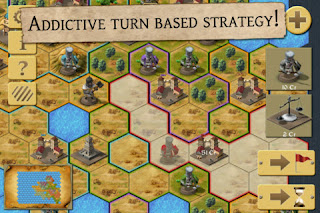 And the biggest problem of all is there’s no multiplayer. Strategy games and board games alike only ever shine when played against real human beings. Because this one isn’t, it’s hard to care about competing against AI opponents.

Presumably all this will be rectified over the longer term via updates, and the potential is still there for this game to be a lot of fun as a bit of light multiplayer. The maps and units are nicely drawn and there’s a lot of variety as those maps are randomised. The balance and lack or randomisation

But in the meantime I’ll go back to waiting for a “proper” iOS release from this very talented studio.