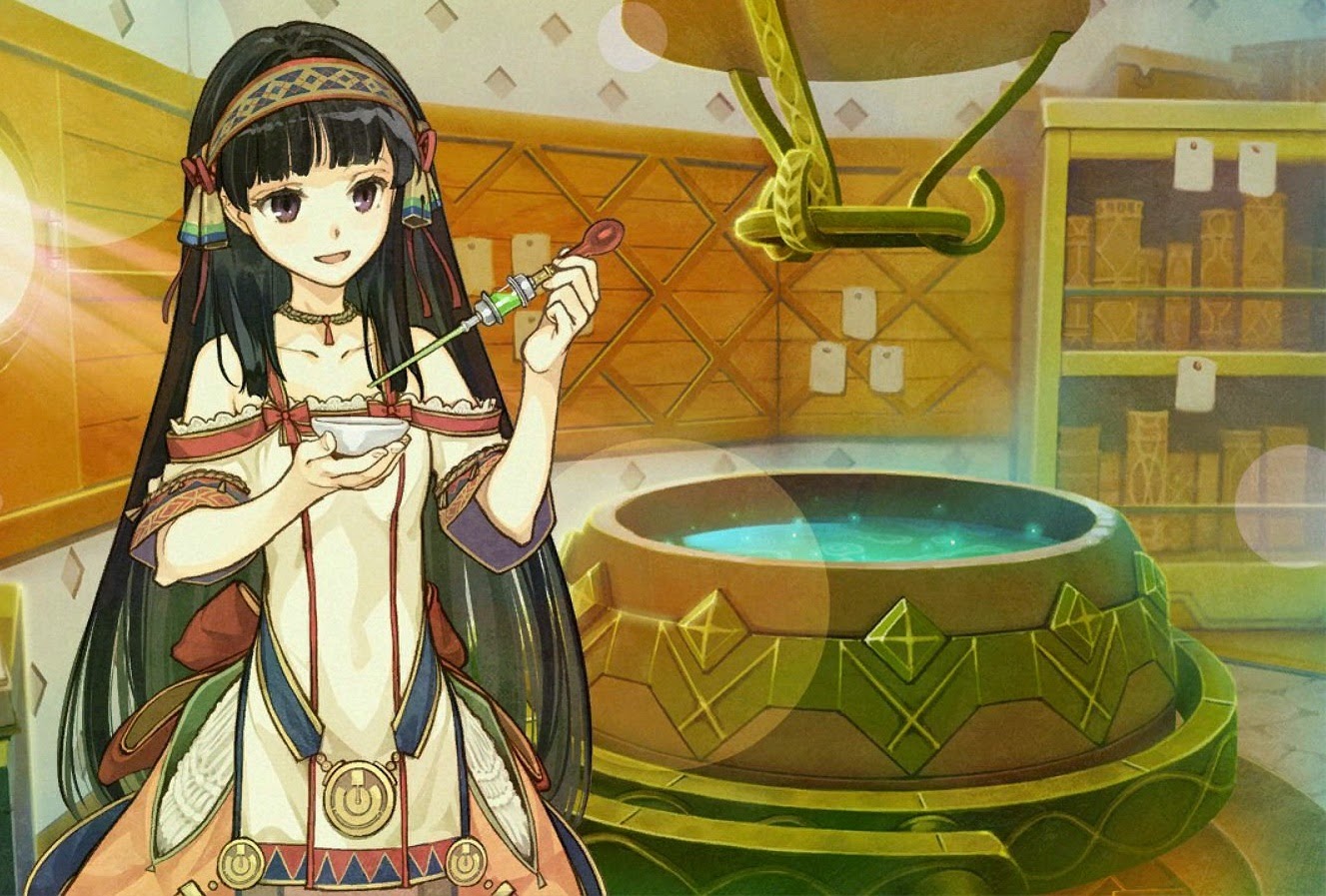 Gust’s conclusion to its Dusk trilogy is certainly as downbeat as it starts. The world is slowly dying as an encroaching ‘dusk’ expands, takes over and corrupts everything. Oceans have replaced water for sand, the ground is littered with bleached bone, vegetation is scarce and communities are shrinking as they literally starve.

Shallistera (Shallie), a young ‘princess,’ leaves her tiny village, which is quickly running out of water, to beg the assistance of a regional city which is well known for being an oasis with plenty of water. The problem is that that city is itself running low on water, but rather than send Shallie on her way they decide instead to exploit her innocent nature to have her run errands, with the vague promise that they will find some way to help her if she’s a good little girl and does as they say.

Meanwhile, Shallotte (Shallie) is a young resident of the city that aspires to be an alchemist. In pursuing this dream she runs odd errands for the city, but she doesn’t exactly have their respect. Her story, then, is one of personal ambition, as Shallistera’s story is a more noble struggle for the survival of her people. After the opening introduction, you’ll get to choose one of these girls, and you’ll get to follow her story. 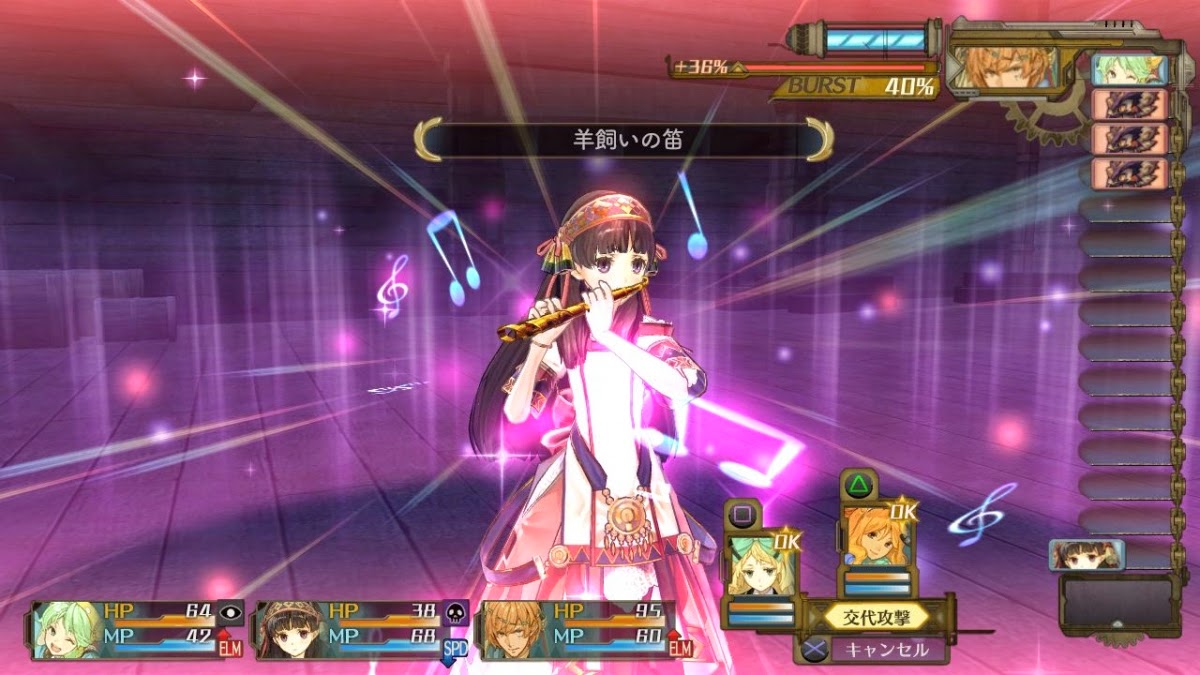 This mechanic was also present to a lesser extent in the previous Dusk game, Atelier Escha & Logy, but this time around the stories are far more divergent. In Escha & Logy, there would be the slightest differences in cut scenes, but the duo would work together, fight together, and see the world together. In Atelier Shallie, the Shallies spend far more time apart. For the first couple of chapters they don’t even meet, aside from passing one another on the street, and so this time around it’s worth playing the game through twice to experience the divergent narratives. Shallie and Shallie have very different ways at looking at the world and when one is a story of personal ambition and the other is the a grander narrative, you are effectively getting two games in the one.

The common thread between the two is just how dark the world is. Taking place some years after the original game, Atelier Ayesha, and its sequel Escha & Logy, the slow annihilation of the world from the Dusk is so much further advanced now, and the sense that there isn’t much time left is palpable. The bold anime colours were an interesting contrast with this dark theme in the previous games, and it is even more so here. Shallie is a beautiful game, with rich, albiet subtle colours, and I find this to be a reflection of the people within the world – despite facing an inevitable doom, they go on with their lives with a positive, communal energy. It’s very much a Japanese response to a Nietzschean problem, and while Atelier Shallie isn’t a down-and-heavy take on its nihilist umbrella themes, putting the controller down and contemplating what it’s on about is a strong story on the positive potential of humanity.

Gust has been quite daring in Atelier Shallie, and has made some massive changes to some gameplay fundamentals that might not sit entirely well with long standing fans of the franchise. The most immediately obvious one is that the clock is gone. I hadn’t actually known that the developers had pulled this feature in the lead up to playing it, and given it has been a part of every single Atelier game I had played previously I kept waiting for the clock feature to cut in, but it never did. 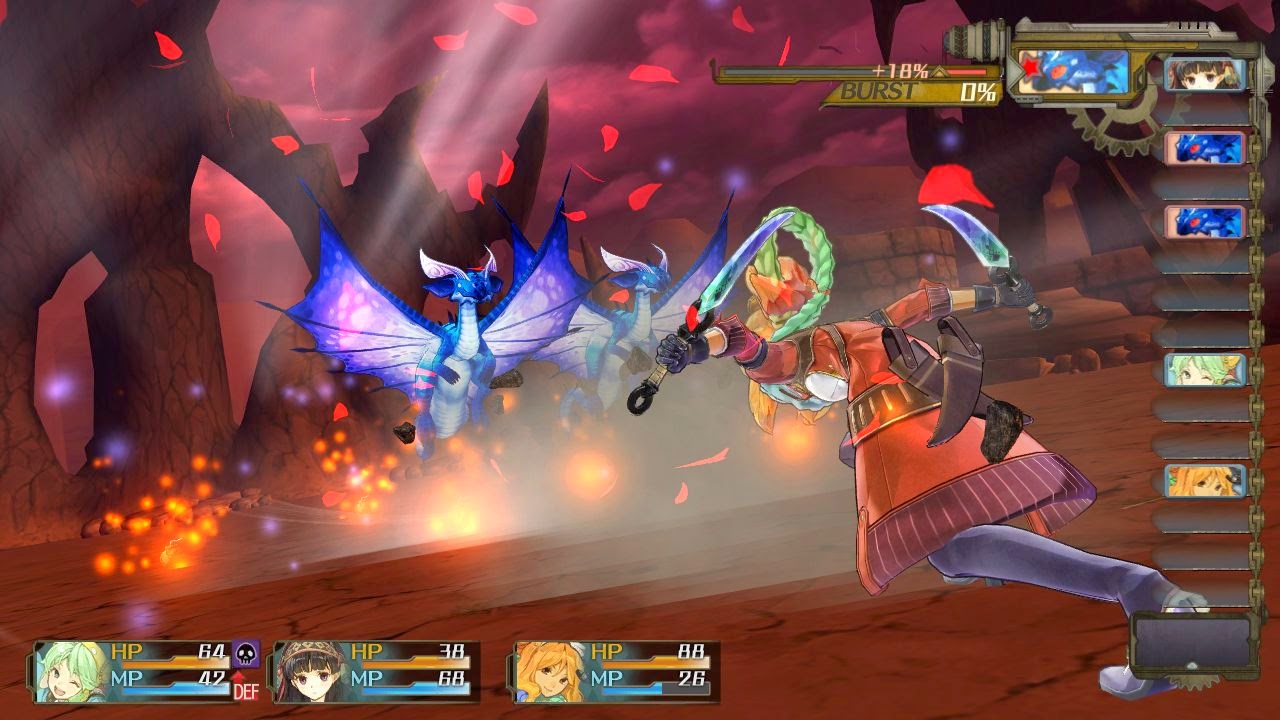 For people who haven’t played these games before (why haven’t you, I ask!), Atelier games – at least since they started arriving on the PlayStation 3 – have run to strict time limits. Players have to achieve certain things each month and year, otherwise they face a game over or bad ending. Because every major activity, be that combat, alchemy, or exploring new areas, takes up time, being successful at an Atelier game requires good time management, in addition to the standard JRPG skillsets around combat strategy.

By removing these time restrictions, Gust has fundamentally changed the pace with which the game takes place. Now you have as much time as you’d like to achieve objectives, and can freely return to any area to collect resources for the purposes of alchemy. Gust has prevented the exploitation of that system by having areas stop producing resources if mined too often, but irrespective of that the pacing of the game is far more leisurely than in previous games.

It’s clearly an attempt to make the Atelier franchise more accessible to more traditional or casual JRPG fans. This impression is supported by the technical enhancements that Gust has made to the engine. In previous Atelier games the camera was fixed, but this time around you’ve got free control of it, bringing the franchise in line with the modern JRPG standard. It actually helped me become invested in the world, as I had a much greater visual understanding of it, beyond the narrow window that previous games have provided me into it. 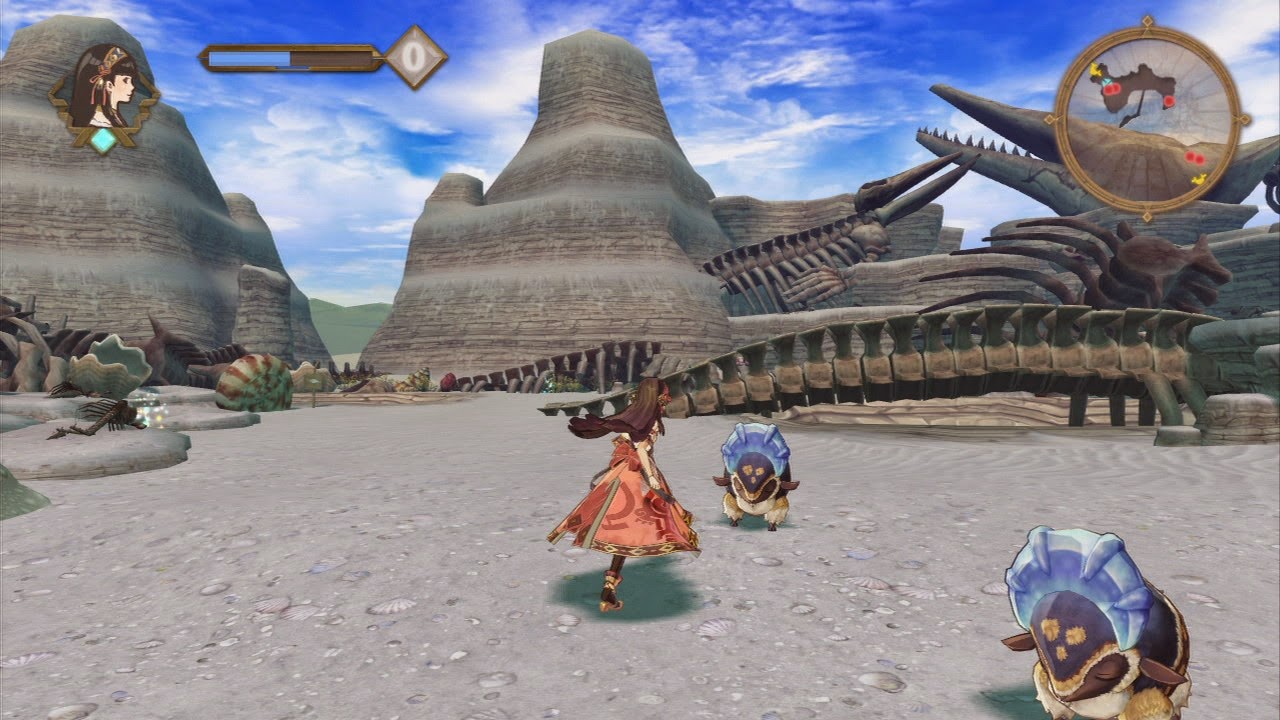 With no time limits on what I want to achieve, I was also encouraged to experiment much more with the alchemy, the Atelier franchise’s marquee feature. In most JRPGs, alchemy starts and stops with combining three raw ingredients to get something awesome. These ingredients might be rare to find, but so long as you had them, creating the perfect item was simple.

But in the Atelier franchise, alchemy is a far more involved process. Either Shallie can drop the raw materials they find while exploring the world into a cauldron to make a wide range of materials or items. Simple items are a single step process, but for the better stuff Shallie will need to combine these refined items again. But that’s not all. Oh no. Quality ingredients bring with them traits that can further enhance the items by making them more powerful, or giving them greater value to sell to shops. This is offset by there being a limit to how much quality Shallie can pack in to her alchemy, based on her alchemy skill level, which builds as she successfully creates more and more items.

Shallie’s alchemy system is the most streamlined and refined of all Atelier games to date. Purists might object to that to an extent, but then again I’m a massive fan of the franchise and I appreciate that Gust has found a way to retain the spirit of the alchemy system while at the same time offering something that a complete newcomer can dig into, understand, and enjoy. It hasn’t really been simplified – understanding how to make the very best items still requires practice and experience – but those first few hours are less overwhelming than any Atelier game we have seen previously. 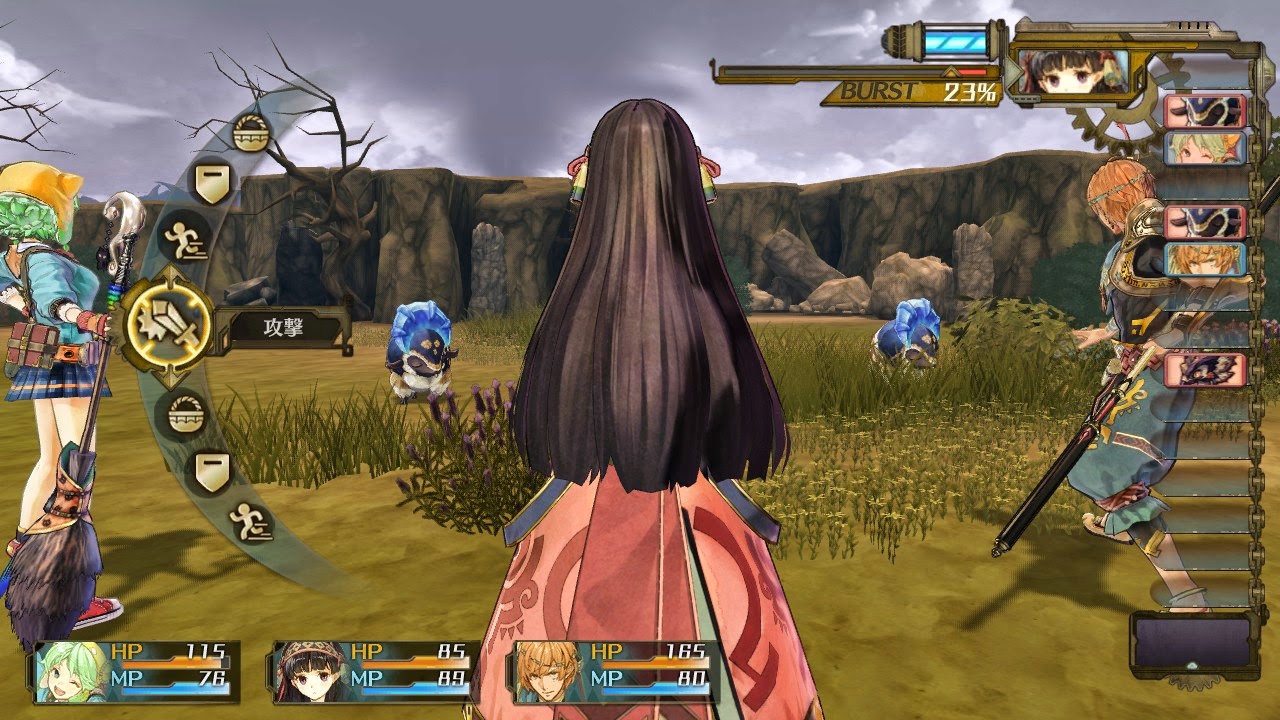 If I was to make a complaint about Atelier Shallie’s various mechanics – and I guess that’s my job – it’s that the combat has also been simplified from Escha & Logy, and I see as a step in the wrong direction for the franchise. Escha & Logy had a system which had a complex support system and characters had an intrinsic reliance on one another to boost both their attack and defence, and while Shallie maintains the spirit of that, it doesn’t continue on the same track of complex systems that I had hoped for, opting instead to play out like a fairly standard turn based JRPG. It works, but it’s the kind of combat system that you would have seen dozens of times before in other games, losing the unique direction that Escha & Logy seemed to be taking the franchise it with its combat.

On a technical level, Atelier Shallie is quite simple, and the PlayStation 3’s weaknesses as a piece of hardware is becoming increasingly evident. It’s a beautiful, subtle game in its aesthetics thanks to its cel shading and stunning character models, but there are frame rate issues that are really quite noticeable, and I spent a lot of time sitting there and thinking how much I was looking forward to the franchise debuting on the PlayStation 4.

The music, however, deserves a special mention because it is achingly beautiful. Given that the theme of Atelier Shallie is downbeat, the soundtrack’s own lonely, mournful ambiance helps to emphasis that theme beautifully. The voice actors in that context are a touch to chipper for their own good, but both Shallies are personable individuals and their voice actors inject a charming youthfulness that helps round out the dialogue. 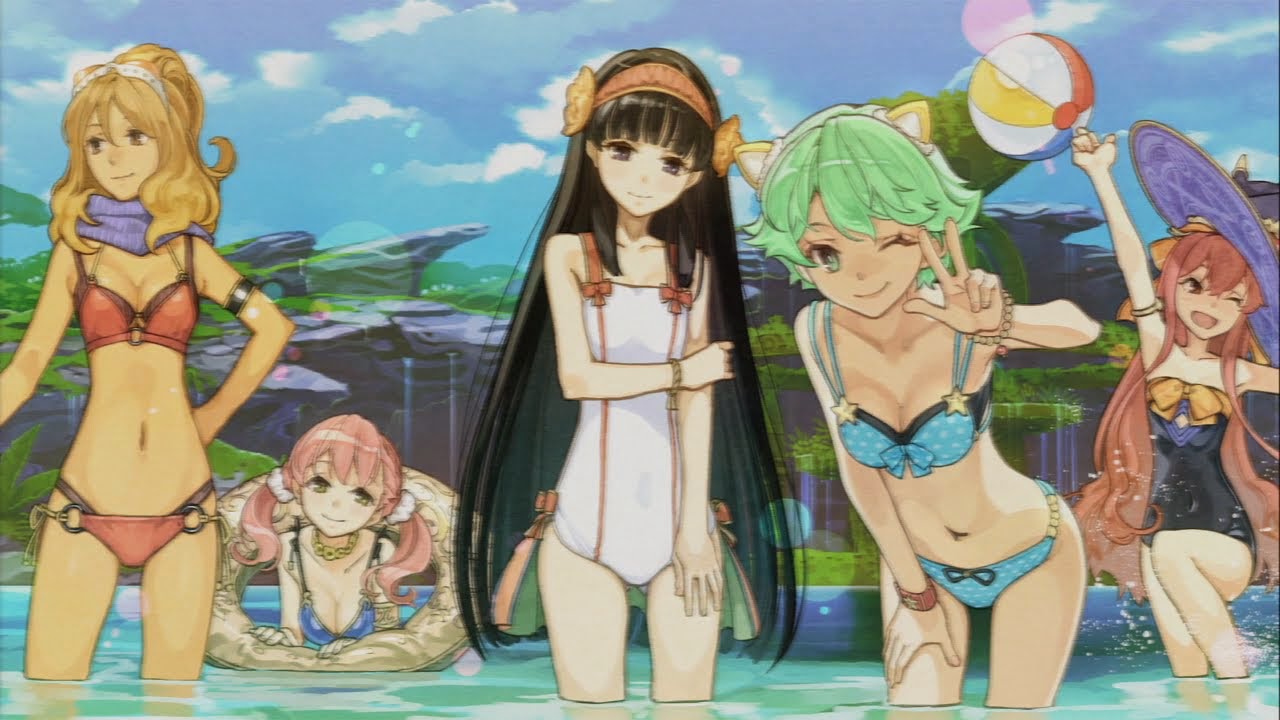 Related reading: For people that did enjoy the Dusk trilogy, I highly recommend the previous, Arland trilogy, which started with Atelier Rorona and is available on both PS3 and Vita.

Gust has really grown under Koei Tecmo’s ownership, and the Atelier series has matured to the point where it deserves genuine recognition among the upper echelons of the genre. If there was any justice in the world a game like Atelier Shallie would be considered in the same breath as the latest Final Fantasy, Dragon Quest, or the Souls game. Because it is that good.

Onechanbara Z2: Chaos is actually getting an English release