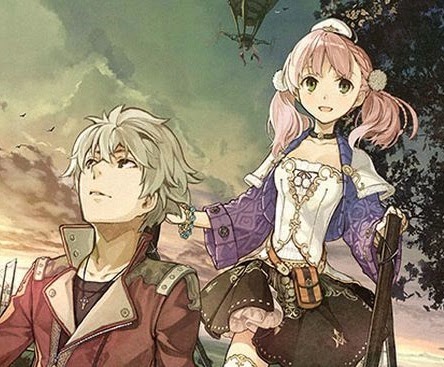 Being acquired by Tecmo Koei has done the world of good for GUST. After some teething pain with its first Tecmo Koei release, Atelier Ayesha, GUST’s second project under the publisher, Atelier Escha & Logy, is a true masterpiece. It’s intelligent, mature, and faultlessly charming.

It’s also the first time in quite a while that GUST has produced a game with a male lead character. Ayesha, and the Arland trilogy that came before it; Atelier Rorona, Totori, and Meruru, were all very much focused on female heroes (and non-player characters, for that matter. Important men were few and far apart in those games). Perhaps this dual male/ female lead is a way for GUST and Tecmo Koei to test the water and gauge how fans would respond to a male lead before releasing an Atelier game that only has a male?

Regardless of the reason, Escha & Logy takes the unusual step of featuring dual protagonists, and this creates a very different narrative style to what we’ve seen before. At the start of the game players will be asked whether they want to play through the story as Escha or Logy. The character that they don’t choose becomes an narrative assistant; constantly available to chip in in battles and dialogue sequences, but not the direct focus of the plot. There are slight variations in the experience depending on your choice, with both characters having some unique scenes to their storyline, but beyond the incentive to play through the game a second time, the real strength of this set up is the relationship between the two characters that GUST is able to explore.

Escha and Logy are brought together to work as a team of local government assistants, and they are inseparable, with near-constant chatter and banter that is truly charming. In fact, these are two of the finest characters that GUST has ever written. Since the acquisition, GUST has let many of the Akihabara otaku elements that used to infuse its games go; where the Arland girls play heavily on moe culture and were immensely charming no one would call them complex characters. Atelier Ayesha represented a step towards a deeper kind of characterisation, and Escha represents the full realisation of an interesting female protagonist. 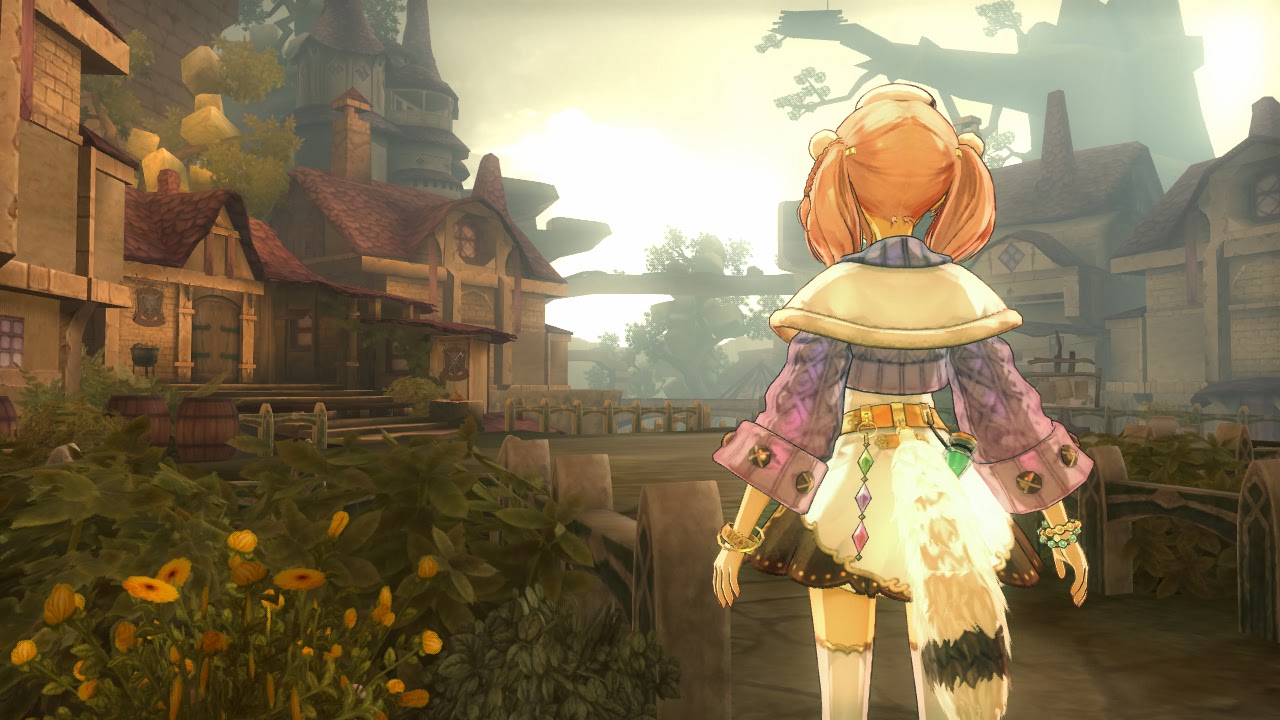 I adore Escha. She retains the sense of fun from previous GUST games, but it’s refined in such a way that she’s also a character that’s more than simply good fun to play with. As a hard-working and dedicated person from a backwards village, Escha has an inquisitive streak, she’s capable and confident in a scrap with monsters, and she’s intelligent and resourceful.

Yes, her costuming is based loosely on a maid’s, and has a tail which serves no purpose other than to be cute, but it’s never really sexualised. Escha as a serious sweet tooth, because in anime tradition it’s cute for girls to like cake, but rather than play it straight, the writers have worked this theme into an exhibition of Escha’s resourcefulness. In other words, GUST has found a way to rework the expected conventions for a game made the the Akihabara crowd in a way that should still placate them while offering a more rich characterisation that should appeal to a wider audience than, say, Hyperdimension Neptunia.

GUST’s male characters have generally been quite flat and functional when they’ve had anything at all to do, more an opportunity for the female characters to bounce jokes off than digital people with motivations of their own. Logy was an opportunity to extend the writer’s range, and he mostly works. His story is the standard “city boy comes to the country” arc; as an alchemist of the big city he discovered that in the country things are done differently and people use traditional caldrons for alchemy, which throws him completely as he’s used to using the advanced technology available to him in the city. Coming to terms with that and then easing into country life manifests itself as a touch of arrogance that slowly dissipates into a likeable character. Logy’s story is a very traditional one, but it’s nicely written and bodes well for GUST’s male characters in the future. 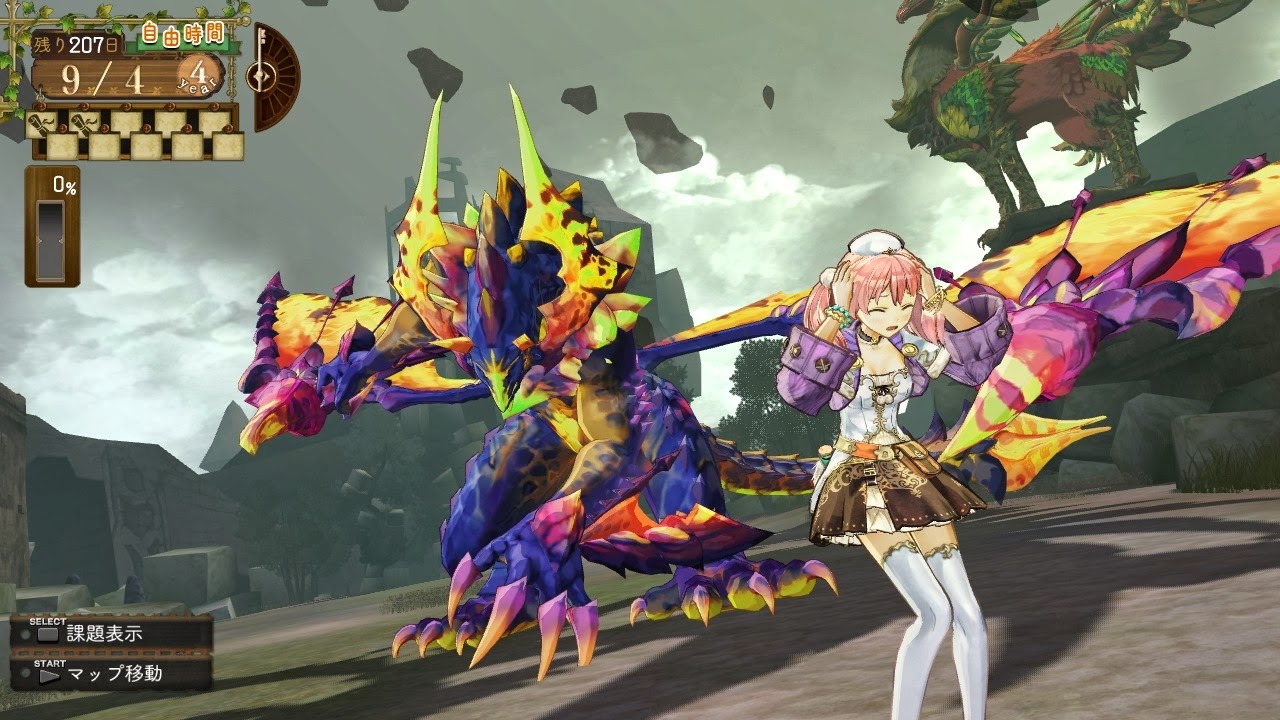 Atelier Ayesha was a different game to previous Atelier games in that it adopted a more serious tone than its predecessors. The fan service was toned right down, and the overarching theme of the game was at times surprisingly dark. Escha & Logy continues in this vein. The cel shaded visuals, which were so incredibly bright and colourful in earlier GUST games, has been turned to a more muted, pastel aesthetic. It’s still an incredibly appealing game, it just looks and feels more earthy.

The music, too, while remaining cheerful, is not as bouncy happy as it once was. Rather, in Escha it’s a rich, vibrant soundtrack on par with the complexity of the finest examples in the JRPG genre. As far as the game’s presentation goes, Escha & Logy is an elegant, graceful fantasy, with an aesthetic that effortlessly competes with games that have ten times its budget. And, to the folks that were upset with Atelier Ayesha lacking a Japanese voice track, there’s good news; Tecmo Koei did hear your complaints, and the Japanese voice track remains intact within Escha & Logy.

While remaining quite heavily focused on alchemy, Escha & Logy’s gameplay is nicely streamlined. I know that some of the more traditional fans of the Atelier series were a little unhappy that some of the complexity had been removed from Ayesha, but I think the developers have done a good job at striking a balance this time around. 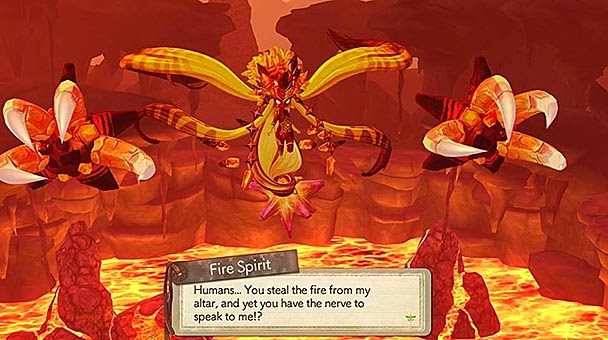 The basic idea behind the alchemy is to take a range of ingredients (gathered from either defeated enemies or collected from the environments) and mix them together to create healing salves, bombs to use in combat, or specific request items to fulfil a mission. But not all objects are created equal in the alchemy pot. See, different ingredients have different traits, and by cleverly mixing these traits, players can create more powerful items. Healing items heal better. Explosive items do more damage. Creating good stuff is the key to success in this game.

Escha’s tutorial system is the most well written yet of the series, and as someone who remembers being all kinds of confused when I first played Atelier Rorona (my first game in the franchise), I am glad that new players will get to experience this one instead. The system slowly layers additional complexity on the player; they’ll start out simply mixing ingredients, and then they’ll earn abilities that allow them to start taking advantage of the traits. So by the time they are working with the full alchemy system, players have mastered the basics, and are comfortable with how it works and are then prepared to make strategic use of it.

While streamlined, the alchemy system is still not entirely easy. Finding good quality ingredients and then deciding how to best use them still forms the core of the Atelier experience. It’s just that this time around a clunky management system and obscure set of instructions don’t prevent players from taking full advantage of it for the first half of the game. 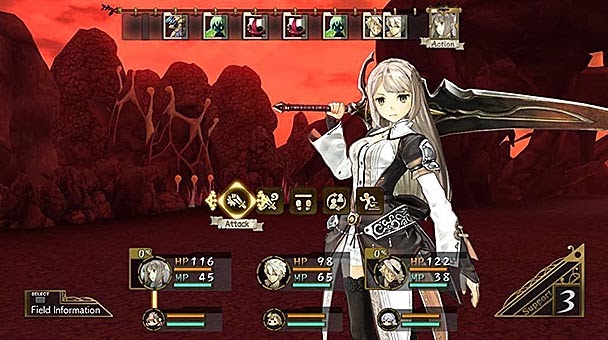 The combat is similarly refined. Where once your best weapons – the alchemical bombs and devices, would be depleted after a few uses, requiring you to waste time making more, with Escha once a player has crafted a healing salve or bomb, they’re able to permanently use it; every time they return home from an excursion its uses are automatically replenished. Now that these items are less of a precious resource the combat in turn is more tactical as players are required to make more heavy use of these items.

Enemies can be difficult in Escha; especially if you wander a bit too far off the beaten track and hit a difficulty spike. Properly preparing the right items to take into combat before leaving town is critical to ward off the tougher enemies (for example, don’t forget cold damage items when hitting an area filled with fire enemies), though the combat system also offers a decent “support” system whereby player have a limited ability to tactically protect the weaker fighter in the group, while giving the more powerful attackers additional opportunities to strike at an enemy. As with most traditional JRPGs individual character customisation is limited with characters earning skills by default at certain level thresholds, but players do get to choose which characters to take into battle, allowing some customisation and control that way.

Speaking of time, as with the previous Atelier games, players have a strict time limit to achieve objectives. It’s not a real time time limit like it is in a game like Lightning Returns. In Escha time ticks over as players take actions, such as travel from place to place, fight in combat, or collect resources. In this game the goal is to meet, at the minimum, a major objective every three months (120 days) of in-game time. As with previous Atelier games achieving this major objective is not such a challenge, but meeting all the side objectives to get the best ending is. Escha and Logy still need to make good use of their time, but where in previous Atelier games the alchemists would be working to yearly deadlines, the three month cycles here are a far more interesting time frame from a mechanical point of view. Where in previous Atelier games the pacing would start to drag because the deadlines always seemed so far away (or players would panic because the deadline is looming and they wasted too much time earlier in the year), the three month cycle keeps players productively focused on the prize. 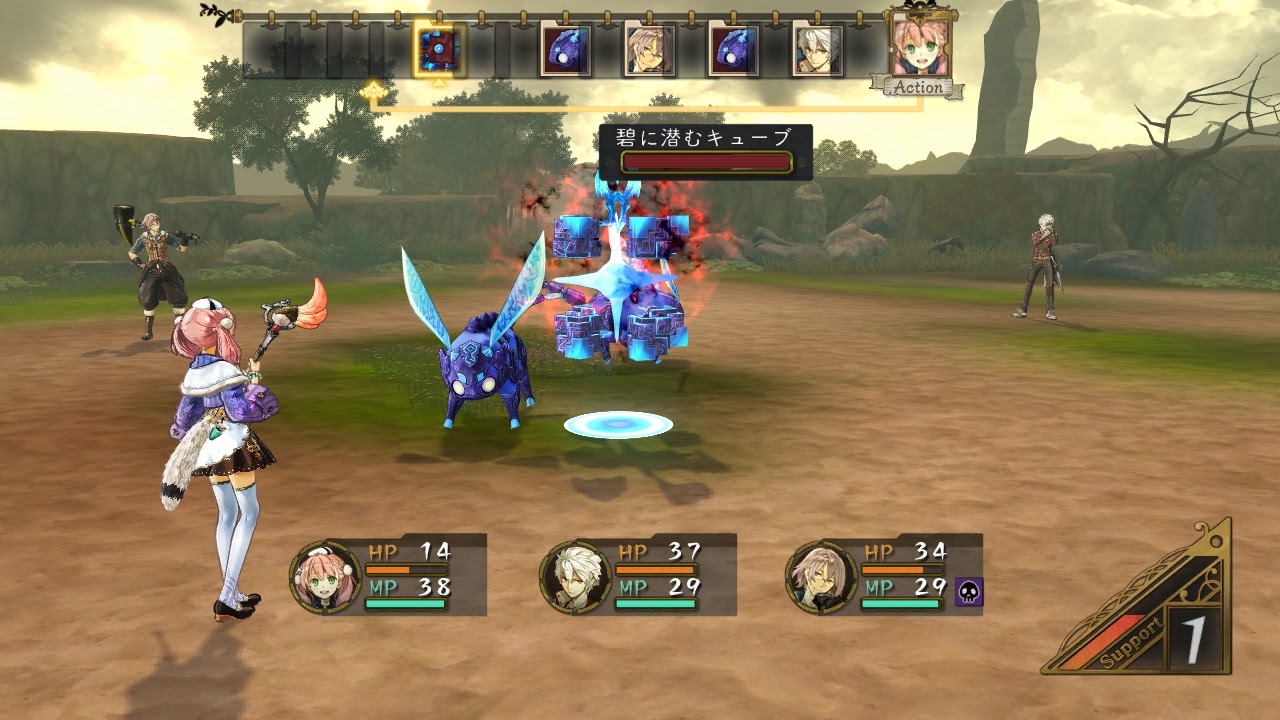 The only real disappointment I have (and the only thing that’s kept me from coming back to Ayesha over and over again as I have Meruru and Totori) is also why I love the game so much; Escha & Logy is a more serious game. When I’m in the mood for something fun to play, and I have a choice between little blue blobs and squirrels with barrels for enemies and irreverent and silly dialogue, and a more natural charm, I’m always going to do with the silly fun.

Nintendo Wii and DS online services are being shuttered. Already