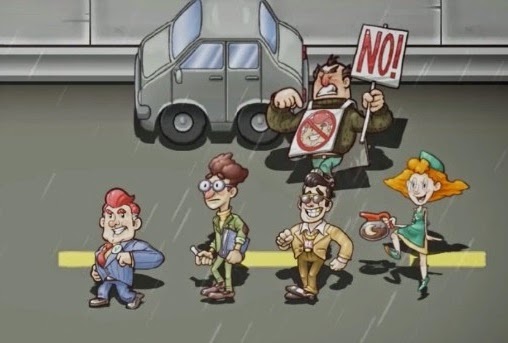 Citizens of Earth is a turn-based RPG that is heavily inspired by Earthbound and has a hint of Suikoden hidden within it. Your character is the Vice President of the World, and your goal is to recruit citizens who will help you solve strange happenings that are occurring across the globe.

The story is wacky and fun with a great sense of diversity. One moment there is a relatively serious matter such as the Vice President having to stop a protest against him (though his response to it is nothing short of hilarous), and then moving on to nonsense about what it so “special” about the special blend at the local coffee shop… Moonbucks. As you play Mr. Vice President will run into citizens who he can recruit to his cause by solving their issues. And boy do these people have issues. Luckily they are also worth helping out because each citizen has his or her own talents for both inside and outside of combat that will make the quest easier once in return for helping them out. All together there are 40 citizens to find and recruit, and while it’s not necessary to recruit them all to reach the endgame, tracking them all down is a fun way to extend the play time. Some citizens also give side missions which are optional but help to add value to the package.

Much like many RPGs in the Earthbound vein, you can see enemies wandering about the map and trigger battles by bumping the heroes into them. In theory the Vice President can also trigger a back attack which gives you energy at the beginning of a battle, but working around to an enemy’s back is difficult thanks to basic AI programming which means they’ll have the magical ability to see you coming and turn around, even if you’re sneaking up behind them. Back attacking weak enemies will speed up the game by triggering an instant defeat, but it would have been good in helping the pace of the game, but sadly too often you’ll be drawn into easy conflicts that have to play out because the enemy turned around in time. 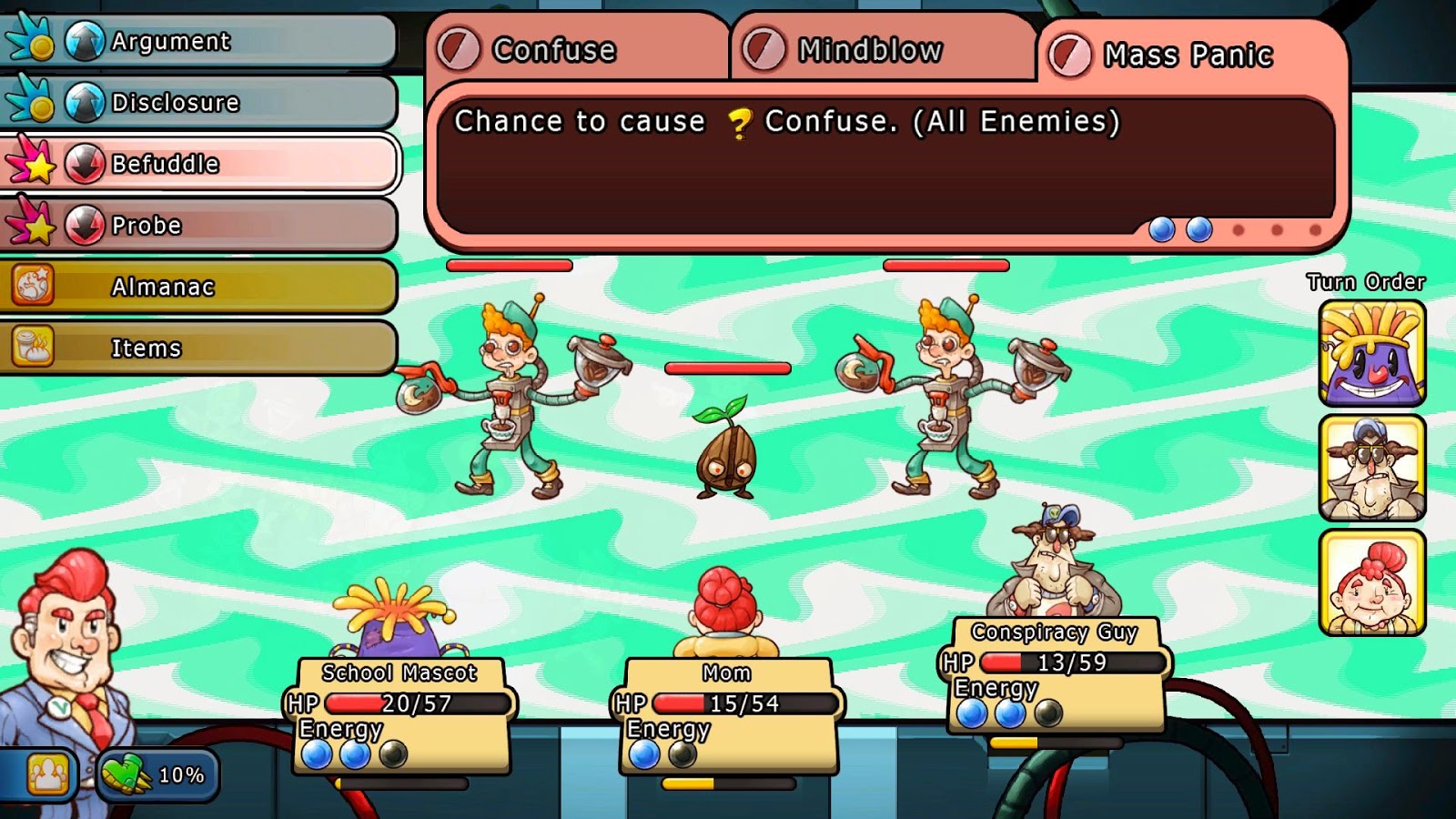 The good news is the combat is quite enjoyable and original enough. You must use certain attacks to gain energy to use your other, powerful skills, that uses energy instead. Depending on the citizen you use in the party (you can have three active at a time), this can vary from a super strong attack to an ability that restores HP to the party. There are standard enough for the genre, but they’re put together in such a way that you’ll want to experiment with all the characters in the party just to see how they work together.

After the first part of the game is complete, the world opens up letting you travel to almost any place you want… with the exception of places requiring a certain citizen to access Luckily, once you get some citizens, there will be additional ways to help you travel the world more quickly. In certain areas of the world, you may find a few mini games, and without giving these away (because they are a delight to discover the first time) these are really worthwhile.

The fact that the game has voice over (and pretty decent voice over at that) was very surprising. The Vice President and all the citizens all look simple on the screen, but because they are so well performed they have real personalities to enjoy. Some parts of the game still require reading since not all dialogue is voiced, but it was still nice to see this much voice acting in an indie game anyway. The music is decent and fits the game’s setting well, however I did encounter a few glitches along the way such as the music stopping and would not start back up. This doesn’t break the game (it’s easy enough to restart), but it does break the immersion more than a little. 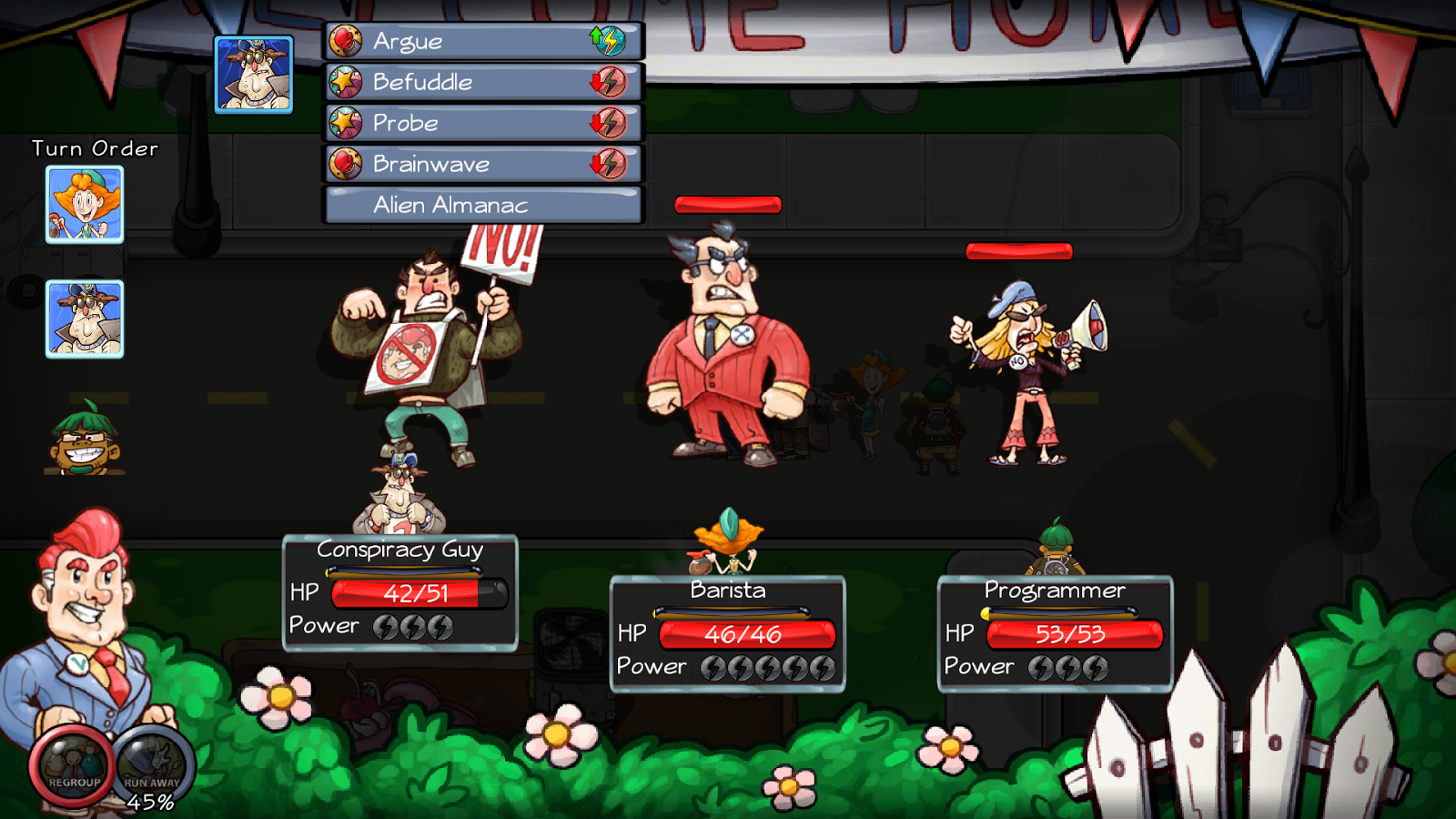 Related reading: You can also read our review of the PlayStation 4 version of the game here.

Related reading: You can also read our review of the PlayStation Vita version of the game here.

Overall I really enjoyed Citizens of Earth. I kept feeling a real desire to come back to play more and try to recruit everyone and finish all the secondary missions, all while trying to level up each citizen’s talent level to max. The story is light and humorous, meaning the game also serves as the perfect remedy for the many darker games that have been coming out lately.