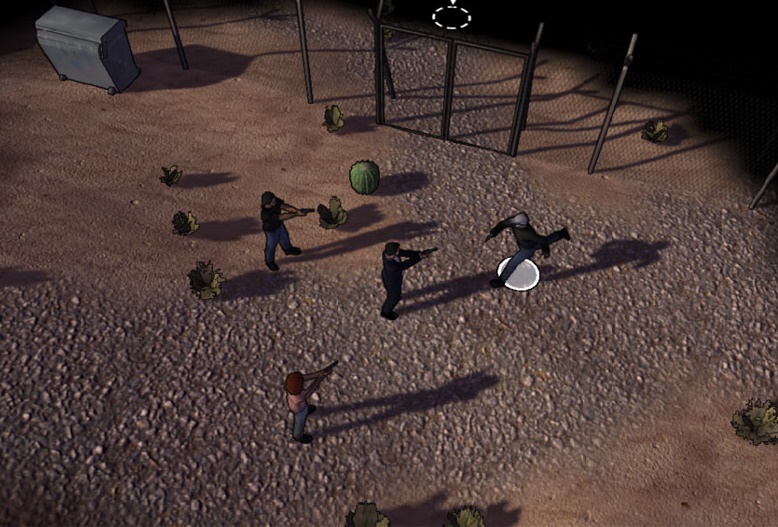 Meet Joe Wheeler – businessman, cynic, and survivor of the zombie apocalypse. Emerging from his disaster-proof bunker a year after a virus has zombified most of the world’s population, he sets off to gather survivors and try to make life sustainable in the chaos which remains. A top-down open world RPG by Bob the Game Development Robot (yes, really), Survivalist tasks players with scavenging, rebuilding and defending their settlement while making sense of the post apocalyptic wasteland around them.

The game plays out in the middle of the desert, offering a surprisingly large world map with a variety of settlements and areas to explore. Joe Wheeler’s bunker serves as the home base, while the various NPC filled forts in the surrounding area provide plenty of quests to undertake. The plot is initially concerned with finding insulin for Alice Ivors, one of the first party members you obtain, and this quest for medication takes you across several towns and quest chains to familiarise you with the game’s world.

Survivalist’s character building systems are simple but highly effective. Each character has skill points for fitness, medicine, firearms, construction and horticulture, all of which are developed through repeated use. Each point is valuable – for example, fitness improves Joe’s fatigue bar allowing him to fight longer, but also increases the amount of load he can carry. Combat is not particularly challenging since aiming is automatic, so the difficulty then moves to finding ammunition and antigen for when a party member gets infected. The game really shines in the “Command mode” however, where the player can give basic orders to their various survivors to perform while not under direct control. Once players start managing their colony through the command mode, the game really opens up and delivers an excellent sense of agency. 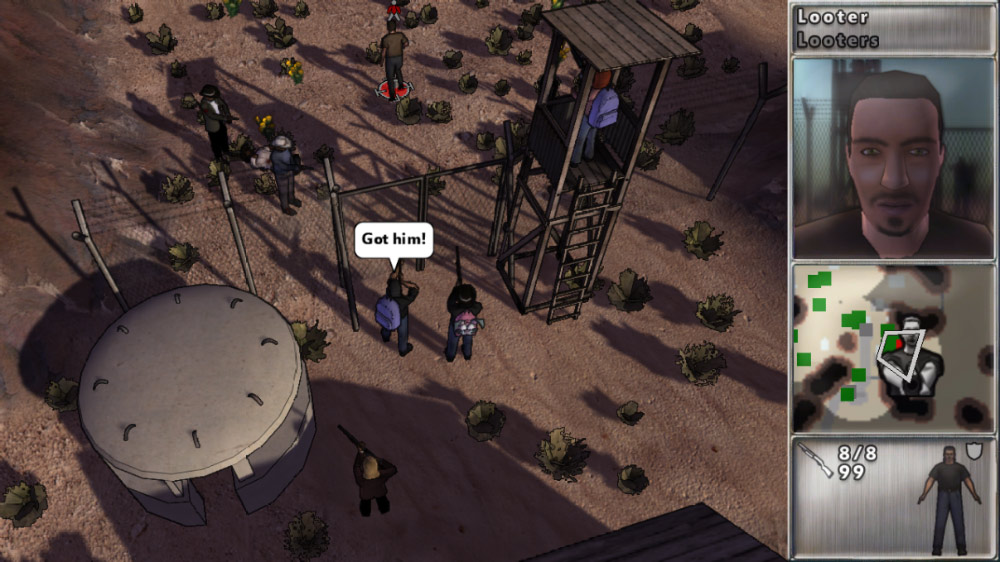 Survivalist bears many similarities to many games – the opening framing device perfectly channels the original Fallout, for example, and many have already made comparisons to State of Decay, but for me the biggest similarity was The Sims. Maybe it was the blocky character graphics or the fact that your community members have just enough AI to stay alive but certainly not enough to complete objectives on their own. Add in base building mechanics as the story progresses and suddenly Survivalist becomes a case of The Sims with zombies.

Related reading: This theme is not that uncommon. How To Survive is a similar attempt, available on consoles as well as PC. Though not better than this one.

Unfortunately, Survivalist’s attempts at narrative are archaic at best. The dialogue options feel too methodical – there is a set list of questions to ask every character, and for the most part they will make the exact same response. Asking any character about what their opinion of the protagonist is will cause them to plainly list off every moral event flag you triggered in the vicinity. It’s a pragmatic approach to dialogue that ensures that player knows their choices are remembered by the NPC’s, although it robs the game’s conversations of emotional depth.

The game aims to promote the player’s ability to make meaningful choices, with various quests altering how the NPC’s behave around Joe. Often he’ll be forced to commit an immoral action to reap a larger reward, or make a sacrifice from his own community to save someone else. There are various ways to complete the game and nearly every character is recruitable under the right conditions, so there is some wiggle room if you accidentally tick off or kill an NPC. Despite the static dialogue, Survivalist’s plot does try to make you think and assess the moral implications of your decisions, and it never stops you from veering off the “proper” path. You can pick a fight with the first friendly settlement you see, for example, and the game will still continue with the consequence of your actions in full swing. 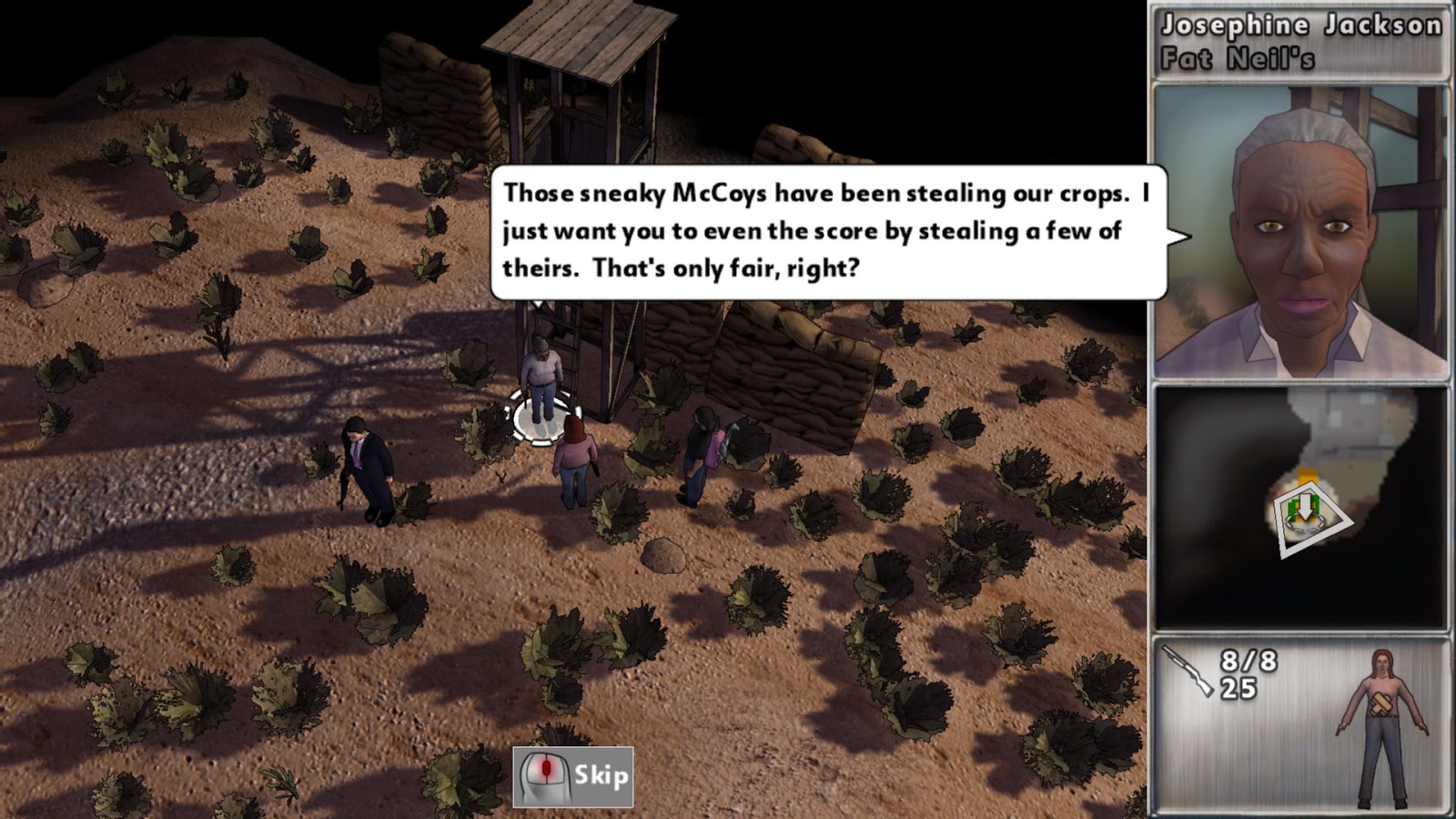 As for production values, Survivalist is a mixed bag but the effort is admirable for an indie title. The game adopts a top-down perspective with a side window showing various events from the characters’ perspectives. The character models are nothing special, but at the very least the developers have managed to distinguish them through various ages, genders and races. The soundtrack unfortunately is unfocused, having been sourced from a variety of composers, and ranges from piano instrumentation to rather unfitting 80’s style techno.

Related reading: For a big budget take on this kind of theme, check out Dying Light.

Survivalist is a perfectly functional RPG, and there are some genuinely fun moments hidden amongst the game’s desolate landscape. Despite this, the mechanics focus more on functionality rather than poignancy and there’s little to drive the player along in the game’s slower segments. At times, Survivalist feels more like work than a game, as Joe scrambles for supplies with no real sense of progression. If you’re in the camp which feels that a good survival game needs to feel like work at times, Survivalist is a good choice for its price.