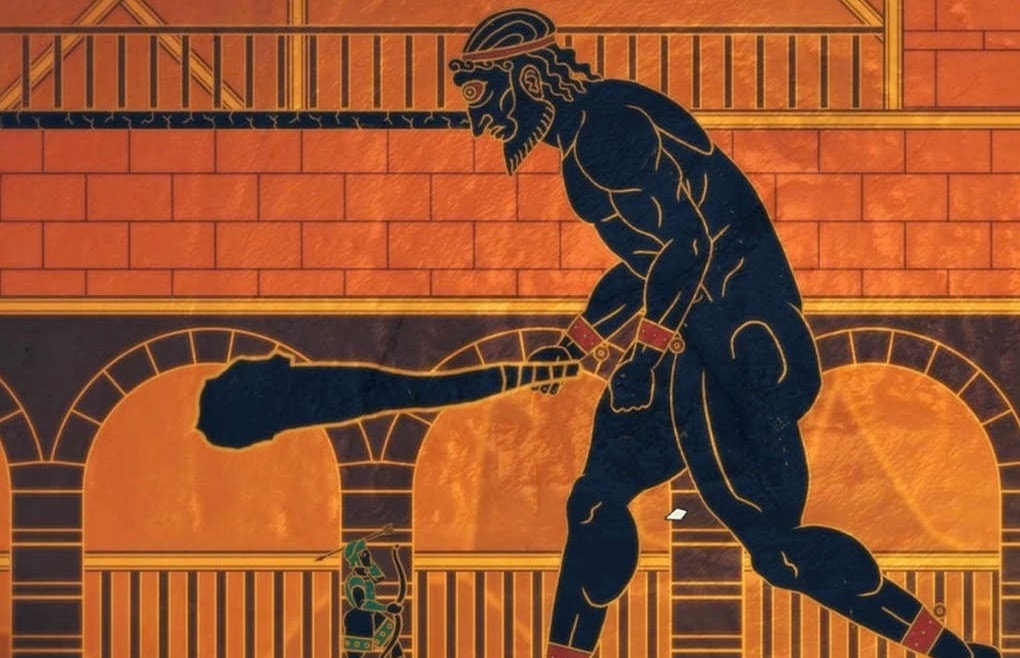 We can probably thank God of War for the popularity behind the whole “let’s make angry Greeks and Gods from ancient times fight each other” deal. Perhaps the 300 film helped out a little. Regardless, it seems to be a permanent sub-genre of its own now, with games like Warriors: Legends of Troy and Rock of Ages also taking advantage of the rich mythology and fantasy of the Greek pantheon of Gods and the crazy stuff they got up to.

But I wasn’t a huge fan of God of War. It was an entertaining series of action games to be sure, but aside from the combat it always seemed to be more B-grade than any genuine attempt to do something that does justice to Greek mythology. And conversely this is why I am such a fan of Apotheon – it’s an action game that is also clearly respectful for the source material, and it’s a homage to Greek mythology rather than simply exploiting it as God of War does.

In Apotheon, you play as Nikandreos, a mortal that finds himself thrust into a conflict against the Gods themselves as Zeus decides that he wants to annihilate humanity. Nikandreos is a fabricated name created solely for the game, but most of the environments and non-player characters are pulled from the actual mythologies. Whether it’s traversing the Forest of Artemis or delving into Hades, this game offers the crib notes of the who’s who of Greek mythology, and the authenticity is immensely appealing. This is supported by the truly gorgeous art design, which looks very much like something you would expect to see painted on to a vase and found at an archaeological dig from the era.

As a setting, Greek mythology has been a good one for storytelling precisely because the ancient Greek Gods were not what we would define as “good” individuals. They were often selfish, capricious beings that did not have humanity in their best interests, which makes them, one and all, perfect antagonists for David vs. Goliath style storytelling where humans find themselves with the need to fight with immortal beings that are, at the same time, not such a simple evil as the likes of Lucifer. The antagonism that Greek mythology offers is a more nuanced kind of villainy, and that makes them excellent villains – something Apotheon takes full advantage of. As simple as this game’s narrative is, it is an enormously effective one in building a kind of judgement-free conflict and providing players with context to the violence without getting heavy-handed with the moralising.

What’s equally impressive is just how alive this game’s environments are. When I started playing I had assumed that the backgrounds and animation would be quite simple, to suit the art style (which is static on the side of pots and the like, after all). But no, Apotheon is one of the most vibrant examples of animation that we’ve ever seen in a 2D platformer. The ragdoll-like physics lends itself to moments of hilarity for sure, when a enemy goes flying from a well-placed swing of an axe or similar. At the same time the physics model lends real impact to attacks too – for all its painterly aesthetic, this is a very violent game, with plenty of gore emphasised by a wet thwack as blade slices through flesh.

Far from being a button masher, Apotheon is a thinking person’s action game, requiring precise movements and superb timing. You have full 360 degree control over where you aim Nikandreos’ attacks, and then you can do the same with your shield. The goal is to aim attacks to get past an enemy’s defense, and you’ll need to measure those attacks because a stamina system means Nikandreos cannot swing wildly. 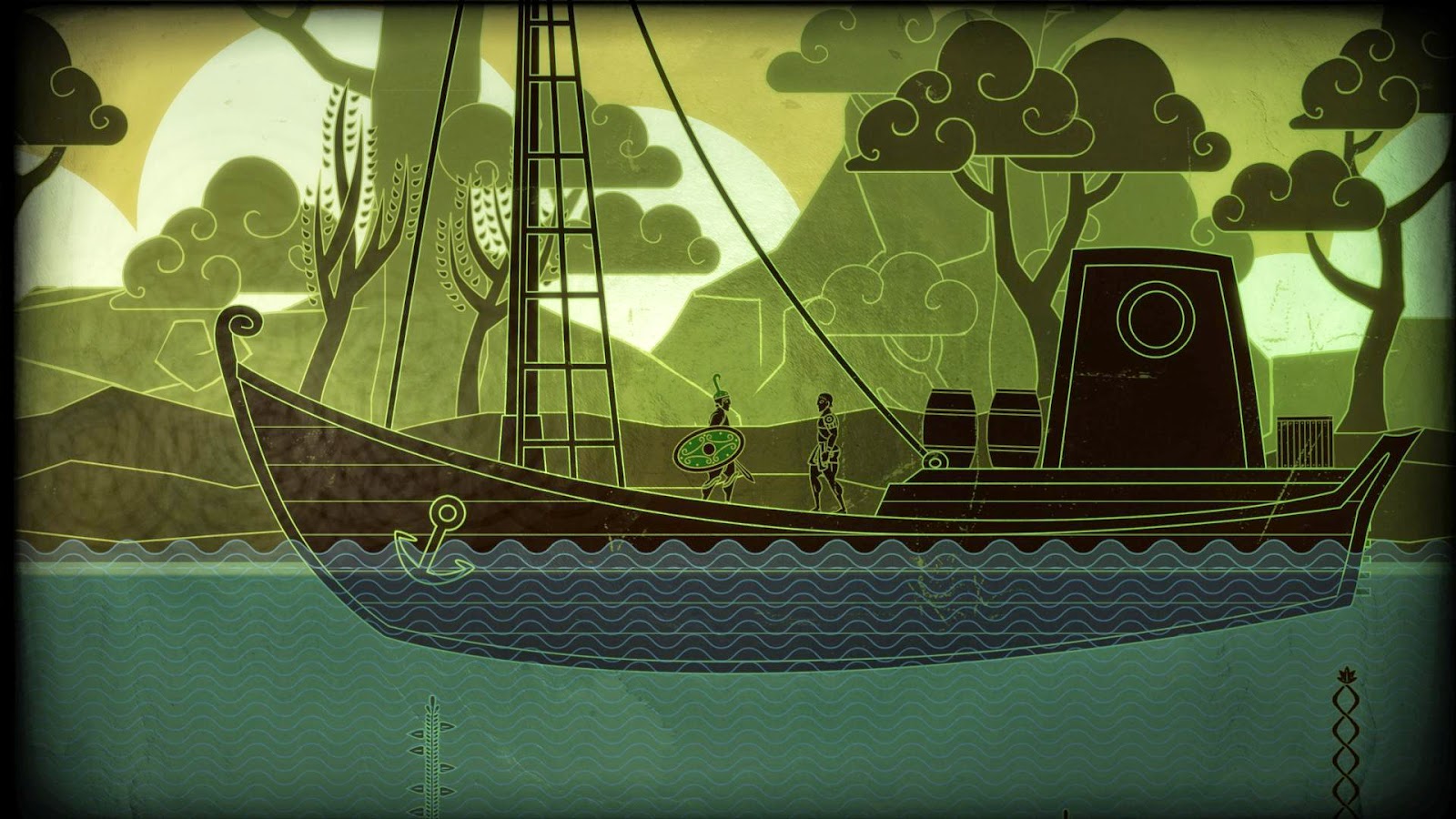 What I love about the system is that is accurately reflects some of the split-second thinking that real fighters need to deal with. For example, if Nikandreos is positioned above an opponent, then he’s got a real advantage. Much of his body won’t be easy to reach with standard weapons, and it’s easy to use a shield to cover the rest. Equally, Nikandreos has easy access to all the vulnerable parts of his opponent’s body. Another thing players will need to watch out for is the weapons, which rapidly depreciate in durability, and once broken will no longer function. Making sure that Nikandreos has access to at least one or two backup weapons is essential.

Throw in the ability to roll, either to get behind an opponent or out of the way of his swings, and Apotheon’s combat quickly develops a to-and-fro rhythm, not unlike two Olympic fencers going at one another. We’ve seen other games attempt to bring a similar level of complexity to its combat – Abyss Odyssey from last year, for instance – but never to the sheer precision of what Apotheon allows. The combination of combat mechanics and clever AI makes for a system that’s as engaging at the end as it is at the beginning. It’s disappointing in that context that the multiplayer is so limited. As I mentioned in my impressions video, I was looking forward to testing out the local co-op because I thought that it would be such a obvious fit that it would be included by default, but disappointingly there is no local co-op, just a competitive mode, which works fine, but is hardly accessible. The technical nature of the combat system means that only people of similar skill levels will get much value out of that mode, though for people with similar skill levels, it’s hard to imagine a game that would offer a more intensely competitive experience.

Aside from the lack of co-op, I can’t really think of a more engaging action game than Apotheon. Equally, I can’t think of a game that fans of ancient Greek mythology will find more interesting than the story that this one weaves. Sorry, Kratos, but you’ve got nothing on Nikandreos.