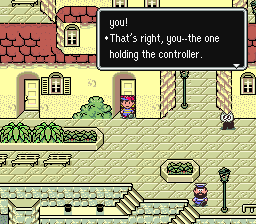 I had never had the opportunity to play Earthbound before. That’s not from lack of desire to experience it, but being Australian means that I miss out on all kinds of classic RPGs (and a bunch of modern ones as well) that people rave about. However, Earthbound was an especially gaping hole in my collection because, to hear certain circles speak of it is is the greatest JRPG ever made. Such is the reputation of the game that it commands some truly magical prices over at Ebay, not unlike a Game Boy Color game we reviewed last week; Shantae.

Earthbound on the Wii U Virtual Console goes for $13 here in Australia, and now having played through it, I’m glad I only paid $13 for it. While it is undoubtedly a lot of fun I do fail to see how anyone could put this game in the same league of some of the classic JRPGs out there.
That’s not to say the game lacks charm, because it’s about as bright and happy as games get. It’s also certifiably nuts. To delve into the history of the game somewhat, the game’s creator, Shigesato Itoi, designed Earthbound as a parody of the JRPG genre and his vision of parody is to block a player’s progress with a giant mechanical pencil, and then task players with tracking down a pencil eraser to bypass the obstacle. If that wasn’t subtle enough then Itoi also has the characters breaking the fourth wall – just to prove that this game is serious about being funny. 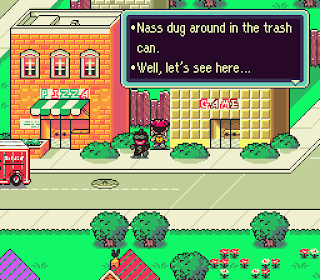 This is a game where an evil cult has dedicated itself to painting everything – including the local cow – blue. It’s a game where a sign in a hospital might read “We offer a special discount on tombstones for those that have passed away in our hospital.” In fact, all the signs littered around the game’s world are essential reading because they are insane.

Or how about this classic piece of Shakespearean dialogue:

“I heard Venus made an appearance at the Runaway Five show.
I missed her because I went to the bathroom.
I’ll hate bathrooms for the rest of my life.”

The game is filled with hundreds, if not thousands of interactions that serve little purpose other than to make players chuckle, or alternatively be so surreal that they weird them out. The plot itself fails to hit any kind of emotional or intellectual depth and kind thanks to this “funny because it’s random” style of storytelling, but the trade-off is generally worth it; Earthbound is funny, charming stuff and its tone is still, all these years later, quite unique for the JRPG genre. The only games I can think of that are comparable are the Hyperdimension Neptunia games, but those are far more interested in the fan service. So Earthbound is, tonally, like the PG version of Hyperdimension, I guess. 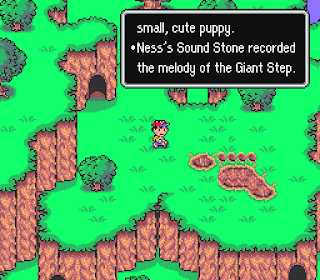 And perhaps I’m being a little harsh on the game’s writing for failing to be something that it never wanted to be. If you compare this to a bad example of “funny because it’s random;” I suggest thinking of half of Adam Sandler’s films, then there’s a sense in Earthbound that the writers were really, really good at what they do. There’s a sense of poetry and rhythm about how the lines of dialogue are delivered. I would like to play the game in its original Japanese, because in a lot of cases I feel like it would fit the mechanical construction of poetry, and it’s just the translation that messes up the rhythm and form. It’s difficult to really nail down from individual conversations, but as the game moves from one environment and mission to the next (and does so at a nice, snappy pace it must be said), you get the sense that this isn’t just a parody of JRPG storytelling, it’s a claim on how to do it right. If you’ve ever played a JRPG that features dialogue that goes on and on, or alternatively one that refuses to give you enough information to play it properly, then Earthbound is that love letter to spot-on pacing that you’ve been looking for.

That sense of humour is supported by really wonderful presentation values. The soundtrack is an absolute killer, with every town and every battle accompanied by something bright and fun. The game’s environments in isolation are as bland as any 16-bit RPG you’ve ever played, but the characters themselves have more personality in their little sprites than most hyper-realistic 3D characters in modern RPGs. 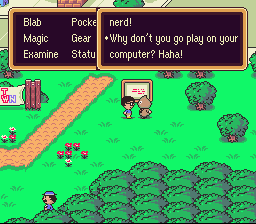 What lets the game down is the combat, which lacks for both intensity and interest even by the standards of the genre at the time. It’s strictly turn-based, and uses the same “first person” perspective as the Dragon Quest games, in that the monsters are positioned on screen looking forwards, and the heroes are off screen, somewhere behind the camera. This is OK, except that these combat sprites are largely uninteresting. To compare back to Dragon Quest and the various wonderful creatures to battle in that game, Earthbound’s creative energy seems to take a hit once combat is joined.

Then there’s the mechanics of the combat itself, which are also very pedestrian. The range of skills to use in combat are limited and there are a few that are simply overpowered and the inevitable temptation is to simply spam that small range of moves to ultimate victory. Enemies – even the bosses – don’t really come with interesting strengths or weaknesses and there’s no real incentive to figure out the most optimal way to fight when the game can be completed with the occasional experience grind. 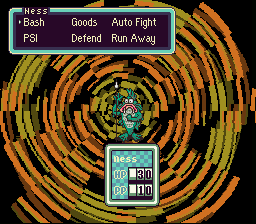 The Final Fantasy series, even back in the SNES era, has always been spectacularly good at giving players something new to look at. Bosses that are nearly unbeatable without the right skills mix, side quests and story segments that are interactive in some way that makes sense to the broader narrative of the world; think of that wonderful opera scene in Final Fantasy VI as an example. Earthbound is a far more immature project in that it’s much more of the variety of “take this party of heroes, go to this town, rescue this person and then the path to the next town will be opened up.” It works, but it also works for the people who make these kinds of games in RPG Maker, and while I can appreciate that the game is a parody, making fun of something while you’re doing exactly what you’re making fun of is less funny and more like hypocrisy. Given the hype of Earthbound I expected a far more engaging combat system.

Perhaps the game is a victim of its own reputation, but while I did have a great deal of fun with this game and in general it’s a quality little JRPG, I wasn’t wowed by it. Now I know the jokes and I’ve experienced the charm, I’m also wondering if I will ever come back to it, because aside from Fawlty Towers, there aren’t that many comedies I can watch twice.

Ashes Cricket delayed to the next Ashes competition