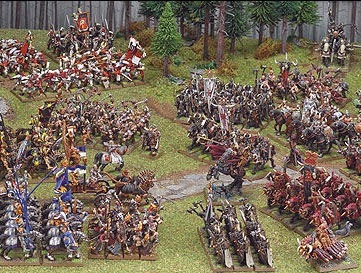 Some big news for strategy buffs emerged today, with SEGA and Creative Assembly accidentally leaking the existence of Total War: Warhammer, which is to be a fantasy game that one presumes will be a RTS like every Total War game before it.

This is, without a doubt, the most exciting bit of news for the Warhammer franchise in video games in quite some time. As I mentioned when I recently reviewed the Lordz Studio’s Warhammer 40,000: Armageddon, I am a firm believer that the Warhammer video games should accurately reflect the experience of the tabletop game, and I never felt like THQ understood that for the long years that it was had the Games Workshop license.

It wasn’t always like that with the franchise. A long time back (PlayStation One era, to be precise) there were two Warhammer games that captured my imagination like none other – Warhammer: Shadow of the Horned Rat, and Warhammer: Dark Omen. Created by Mindscape, these two games were RTS games (and were unlike the tabletop game in that regard) but were in every other way very much like the physical Warhammer game that had me spending most of my pocket money as a child on miniatures and paints. You would build up a massive army through branching missions (meaning that no two runs would result in you having the same forces by the end), and though it doesn’t look like much any longer, at the time the game gave a convincing sense of units clashing against a backdrop of epic fantasy battlegrounds with wizards hurling crackling magic about the place.

The fact that units could get levels of experience and become tougher also lend the game the all-important personalisation touch. If you wanted to focus on ranged combat, you could. If you wanted an elite unit of cavalry to hold down an entire flank on its own, that was possible as well. At a time where the likes of Command and Conquer and Age of Empires was the dominant strategy game and that meant “strategy” didn’t extend much further than building a force of nameless, faceless units faster than your opponent to swamp them, Warhammer offered a different kind of experience – resources were not unlimited so you needed to carefully consider how to move units around the map to deal with threats, and they were led by characters with their own names, meaning that they had actual personality.

Related reading: I loved Warhammer: Shadows of the Horned Rat so much I listed it as one of my favourite games ever made.

That kind of experience largely disappeared from Warhammer when THQ acquired the Warhammer license, but if any game developer is going to be able to bring that kind of appeal back, it will be Creative Assembly, with the Total War games already offering that same kind of unit-to-unit combat that was so appealing to me as I played and replayed Shadows of the Horned Rat and Dark Omen.

There are, of course, next to no details about the game since it hasn’t been formally announced, but if there is any one game that is going to be firmly on my radar this year, it is now Total War: Warhammer. I’m anticipating something a little like King Arthur: The Roleplaying Wargame from a couple of years ago, but with the warmly familiar Warhammer armies and universe laid over the top. For that, I might even finally get around to investing in that top-end gaming rig I’ve been promising myself for years now.

Check out the trailer for the upcoming new Final Fantasy XIV: ARR patch 2.5