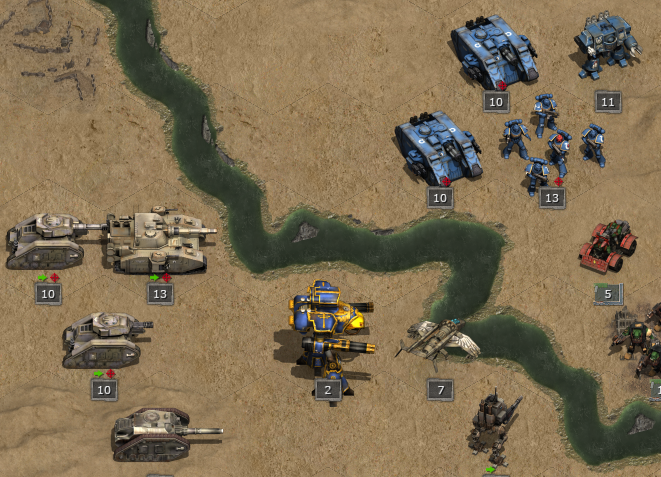 Under the “guidance” of THQ, the Warhammer franchise really lost its way in the world of videogames, becoming laboured with useless pew pew button masher action games that may have had “Warhammer” slapped on the box title, but really wanted to be Generic Action Game 101, 102, 103… and so on.

So if there is a positive result of THQ disappearing into the history books, it’s that the Warhammer franchise could find itself a new home. One that would hopefully have more respect for the core material. Games Workshop, the owners of the Warhammer IP, seems to have decided to shop it out to multiple developers. That strategy has produced both poop and gold, but if there was ever going to be a developer and publisher team that was going to do the Warhammer name real justice, it was always going to be Slitherine and The Lordz Games Studio.

Warhammer is a game about painstakingly building and tweaking an army and then taking it to the battlefield for simple turn based strategy against an opponent. It’s through the ownership of an army that your connection to the game and its systems come, and it can be an incredibly addictive formula as you start buying up and painting miniatures and watching an army that is uniquely yours growing. While you’ll not be spending weeks of your life painting miniatures as you would in the tabletop game, Armageddon otherwise perfectly encapsulates the appeal of the Warhammer game – you’ll be carefully building up the ideal army that suits your play style, and then pitching wits against increasingly difficult opponents in increasingly high stakes scenarios. 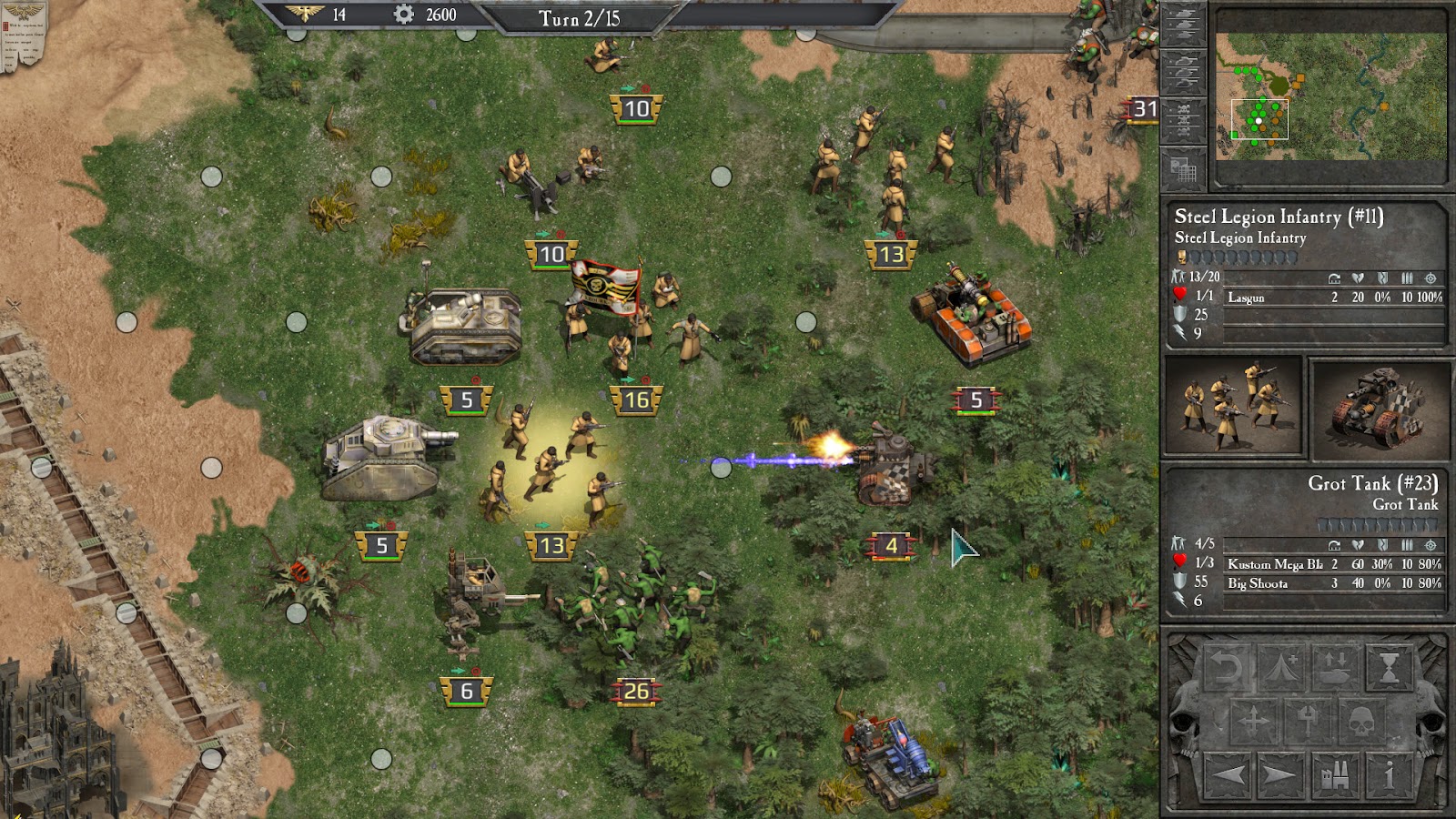 The basic engine of the game is the same one that powers The Lordz Games Studio’s previous title, the excellent Panzer Corps. As with that game the simple presentation belies the quality of the systems running underneath. Units occupy spaces in a hexagonal grid, and on your turn you’ll move and attack with the lot of them before passing the turn over to the opponent. Some units specialise in speed, others in ranged attack, and still others are heavily armoured behemoths. Warhammer 40,000 fans will recognise loads of the units in the game, and while the combat system is fundamentally different to the dice rolling that goes on in the Games Workshop tabletop game, Lordz has done a really good job in properly reflecting the various strengths and weaknesses of the units from the ‘real’ game in its own systems. Building a good mix of units is key to success, and while the on-field strategy is simple, it’s still important to take advantage of the various terrain features and unit morale for a competitive advantage. Units also gain experience with battle, with veteran units carrying over from one battle to the next. The more experienced a unit is, the more useful it is on the battlefield, but the more it needs to be protected to not lose such a crucial asset.

Related reading: For insights on how a niche publisher such as Slitherine operates, check out our interview with its director.

There are something like 30 scenarios in the main game, and within that there are plenty of opportunities to take ownership of the story and determine which battles to participate in. This is presented quite simply (the game literally asks what you would like to do next), but it’s an important feature in allowing players to become more invested in what’s going on in the game. Lacking the ability to paint miniatures and looking as plain as it does, it was important for Lordz to find a way for players to customise their experience in order to fit with the Warhammer philosophy to game design, and Armageddon’s branching narrative system calls to mind some other classic Warhammer games, such as Shadow of the Horned Rat, which was the real glory days for the franchise. 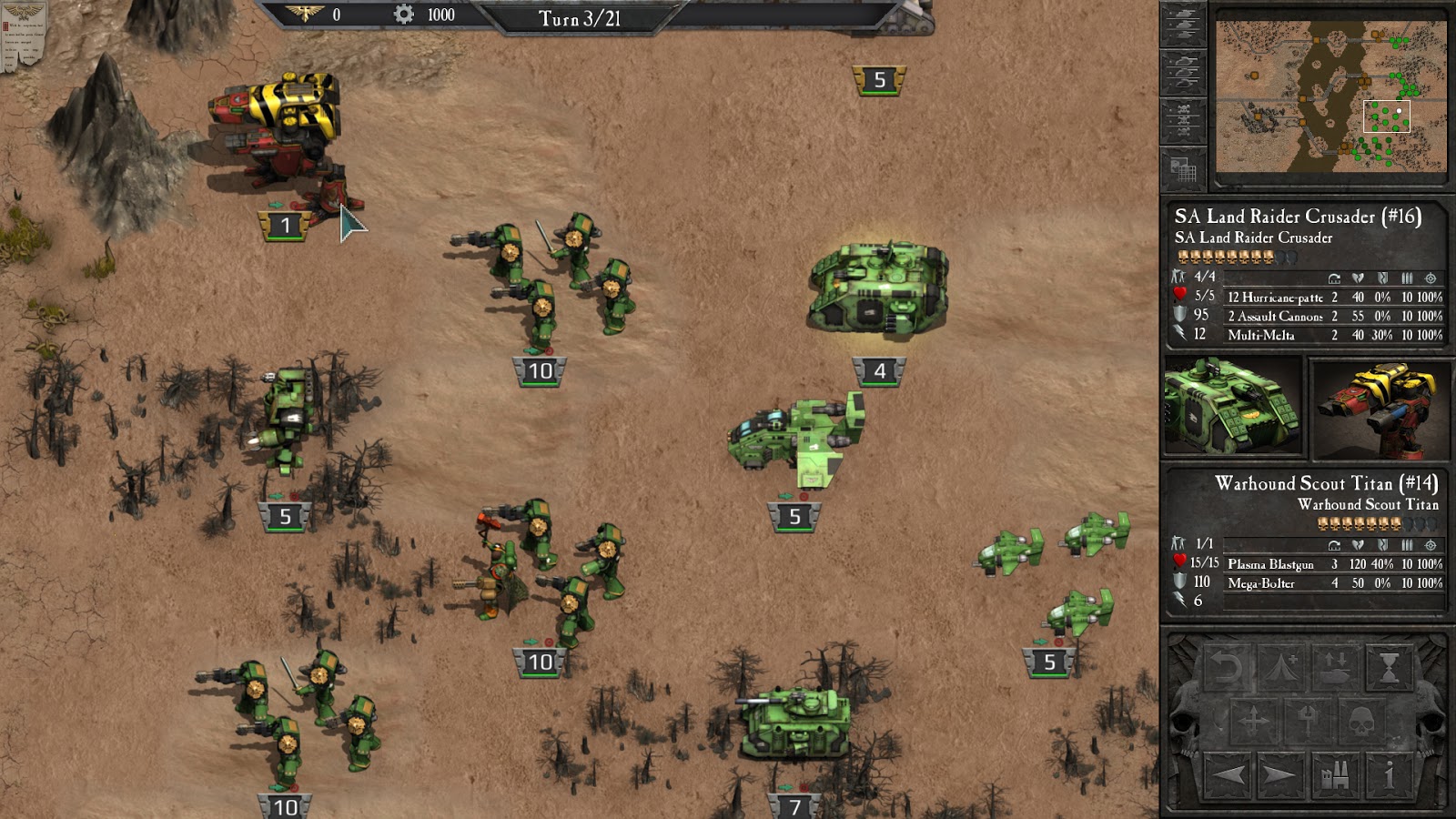 Lordz has done the best it can to produce a compelling story to follow, too. Fully voiced characters and cut scenes rely heavily on a player already having an image of the grim future fantasy setting of Warhammer 40,000 to fill in some of the presentational gaps, but as simple as it is, fans should get a kick out of the scenarios and have some familiarity with the environments and battlegrounds. There’s some good use of the license, too, with the developer tackling an important event in the fantasy history of the universe. There are even mid-event battles that can change the flow of combat by introducing new objectives, which helps to keep players focused on what’s going on around them.

One of the greatest strengths of The Lordz Games Studio is its ability to challenge players with something more than raw numbers. There’s some genuinely good AI on display in Armageddon which will co-ordinate attacks across multiple fronts and not fall for some of the really simple exploits that make other tactics games less about strategy and more about working out what the exploits are. On the higher difficulty levels, especially, I found myself genuinely challenged, and I like to think of myself as a strategy game veteran.

Related reading: Another Slitherine game, Battle Academy 2, won our award for the Best Mobile Game in 2014.

Is it disappointing that units in Warhammer 40,000 are so simple in presentation? Sure, especially when you consider how monotone many of the “apocalyptic” environments are. But given the choice between a game like this an a major studio producing a Warhammer game that fails to even understand where the real appeal of Warhammer lies, I’ll take a game like Warhammer 40,000: Armageddon any time.