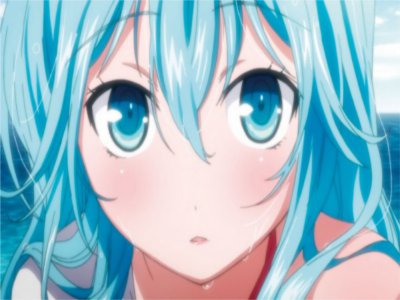 Review by Clark A.
Shaft is a studio so wedded to avant-garde works –Mekakucity Actors and the Monogatari series spring to mind – that Ground Control to Psychoelectric Girl initially struck me as an uncharacteristic instance of it animating a conservative franchise. Rooted in increasingly oversaturated high school slice of life material, it’s understandable why the series could be branded a cynical example of the genre. From the promotional assets to the opening episode itself, viewers are teased with a spacey sci-fi world that is promptly kicked to the curb.
Even as the show’s electrifying potential stabilises and shifts to comparatively banal high school life, however, this anime ceaselessly aims for the cosmos. Ground Control to Psychoelectric Girl ultimately moved me because it works within such cramped parameters to tell a tale that is simultaneously entertaining and stimulating.
The series opens humbly and traditionally with the introduction of Makoto Niwa, who has taken up residence with his aunt due to his parents’ hectic work schedule. He soon discovers a cousin who lies around the house wearing a futon mattress and claims to be an alien named Erio Tōwa (get it? E.T.?). Rendered curious by her eccentric habits and barrage of extraterrestrial lingo, Niwa interacts with Tōwa in a vague attempt to parse her absurdity.
From there, the plot can be perceived as two halves; the individual processes of self-realisation undergone by Tōwa and Niwa. This is where Ground Control to Psychoelectric Girl will be misconstrued as a safe, shallow affair. Without spoiling too much, Tōwa is dismissed very early on as an anxious, delusional NEET and, thanks to Niwa’s intervention, gets well on her way to becoming a regular member of society. However, many of Tōwa’s potential struggles are glossed over and characters regularly speak of their philosophical standings in a fashion that seems overly revealing. The show would have benefited from a couple extra episodes to build on because little instantly comes off as profound whilst Niwa endeavours to save his cousin. 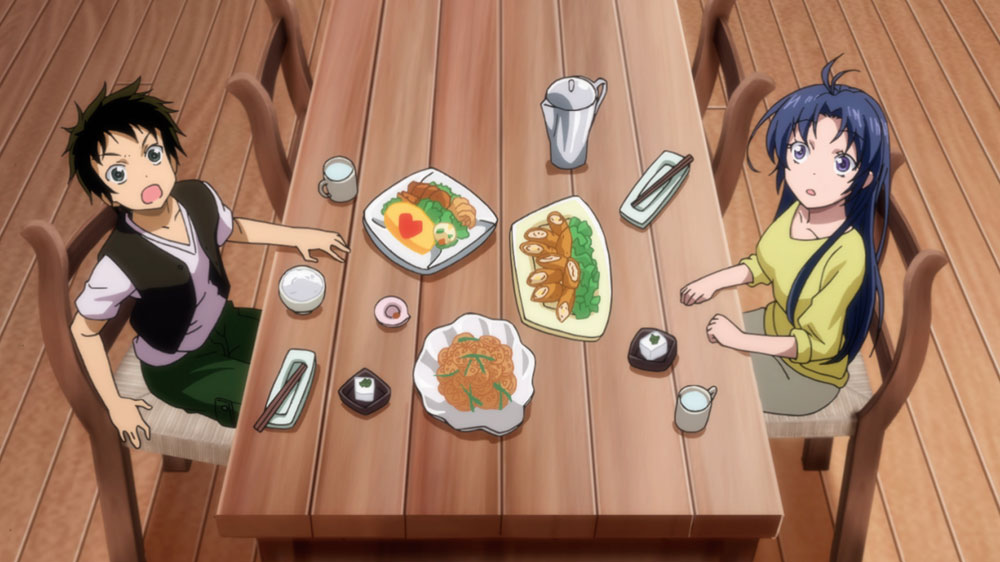 Niwa then spends the story shooting down the aspirations of others and himself in the name of well-intentioned pragmatism stemming from his childhood, but it’s plain to see why the grave importance of this plot points slips past viewers when the show hands out deceptively straightforward answers to its proposed issues and mysteries. Oftentimes the writers seem to be tackling well-documented issues such as youth unemployment with limited effectiveness, but they’re actually using these instances as set pieces to pose more abstract quandaries. That may be the crux of why Ground Control to Psycholectric Girl seems limited; it has a tendency to shoot deeper thinking in the foot before devilishly revealing the true scope of what, at times, doesn’t even seem like a plot.
Related reading: ef: A Tale of Memories and Melodies is another Shaft anime that tackles some youth issues from an often more serious angle
One heavily explored theme is what youth means as something more than a developmental stage to bridge pleasure and responsibility. Rather than being a coming of age story in and of itself, Psychoelectric Girl delicately illustrates conflicting stances on the value of teen years using the context of a high school comedy.
Niwa himself constantly rambles about “adolescence points” throughout every single episode. The simple idea is to acquire as many as possible by pursuing exciting activities. He values what you’d expect of a teenage male, trumpeting the glory of experiencing high-stakes thrills, visiting the houses of his female classmates, and even catching a whiff of his beguiling aunt’s perfume on his pillow. His stance is that recalling youthful days can be a difference-maker down the road; that times of sorrow or apathy will be bearable with evidence of one’s former grandeur. Numbering and dehumanising our accomplishments is a way of boiling life down to a game of winning and losing, but more important is how this system frequently shocks the viewer with Niwa’s often vapid outlook on existence (especially in conjunction with his many monologues). 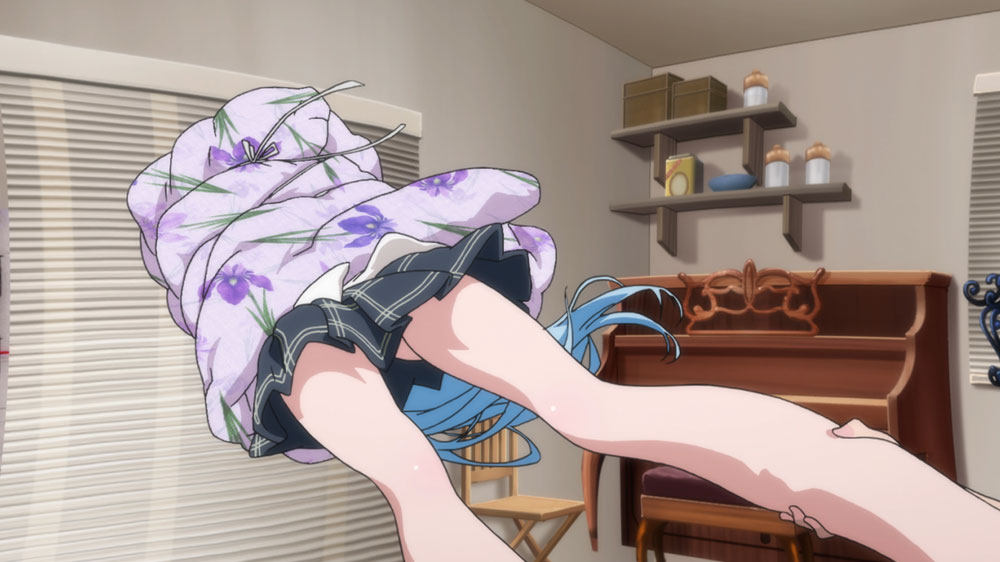 And yet, despite the writers’ successful efforts to depict Niwa as half-hearted for plot purposes, genuine contentment does graze him as a direct result of his shenanigans and instinct to help others. That’s because, despite being a realist, Niwa is infatuated with actions that are ultimately meaningless by his own admission. The show’s comedic moments stem from his association with the cast of friends he slowly accumulates and this is where the slice of life elements come out in full bloom. We listen to Niwa commentating on menial activities performed by other characters – often acts as simple as gathering around the Super Famicom with a pal – and participating in conversations that reek of the mundane, but these scenes are crucial to the development of all characters involved. They permit us to explore adolescence from a highly personal lens and peek into the characters’ psyches.
It’s difficult to describe the opposing views to Niwa’s without treading into spoiler territory since the bulk of them come down the stretch, but rest assured that they are addressed via a number of subplots and characters. I can’t stress enough that this show goes above and beyond to prove its high school life setting is more than a backdrop for the audience’s amusement.
The final episode is a powerful one that can either be viewed either as a silly conclusion to a slice of life story or a scathing rebuttal of the protagonist’s ideologies that permeate the series. It subtly ponders the legitimacy of faith and the depth of ontology – themes that were outwardly tackled with battle shounen levels of depth just episodes earlier, mind you – whilst drawing direct comparisons with old proverbs and fables like The Boy Who Cried Wolf. A pragmatist’s mindset is to dismiss the world’s quirkier possibilities on the basis that they lack observable evidence, but this show also serves as a cautionary tale to remind us of the inherent risks in taking this too far. 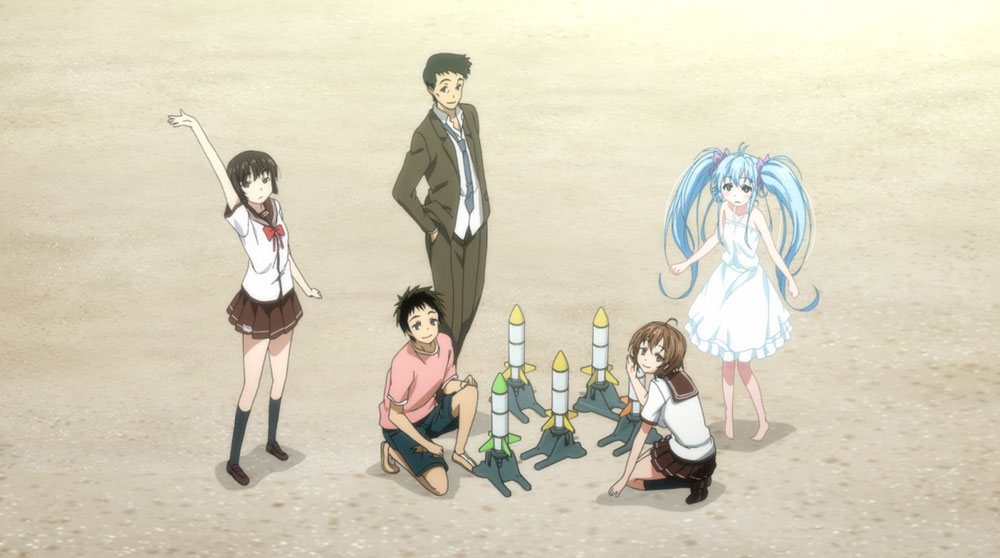 When the show tackles faith, it does so heart-warmingly and even-handedly. I don’t say “faith” in the clichéd “anything is possible if you believe” sense perpetuated by the anime industry but the actual role that it plays in determining one’s satisfaction in life. Just how reliant are we on it and is it truly possible to avoid? Why do so many blindly place their trust in theories and “facts” despite having never investigated them firsthand? The story gives ample resources to reflect on such queries through events that, again, seem quite insignificant until the realistation that many serve dual purposes as analogies.
Now since this show is technically a comedy as well, it warrants mentioning that the jokey moments hold up their end of the bargain. Many gags are had at Niwa’s expense due to his potential attraction to both his cousin and aunt. These scenes are often uncomfortable for the viewer but they ought to be because Niwa himself is squirming and conflicted despite his denial. Moreover, these moments actually contribute to the aforementioned examination of adolescence. They’re certainly not overly otaku and I guarantee most will get a giggle or ten from Psychoelectric Girl’s less predictable character archetypes. Oh, and there are more awesome Earthbound references than I’ve ever seen in one place so there’s that.
Related reading: In the mood for a much more lighthearted comedy? Try When Supernatural Battles Become Commonplace
Seeing as Shaft handled the animation, this anime more than looks the part. It lacks the inventive colour schemes and camera work of shows like Mekakucity Actors, but this would have conflicted with the show’s vision. Characters and environments as seen by Niwa are captured in manners that accentuate the beauty of his life experiences. The understated soundtrack plays its role brilliantly as well, underscoring the more volatile scenes and never detracting from them. 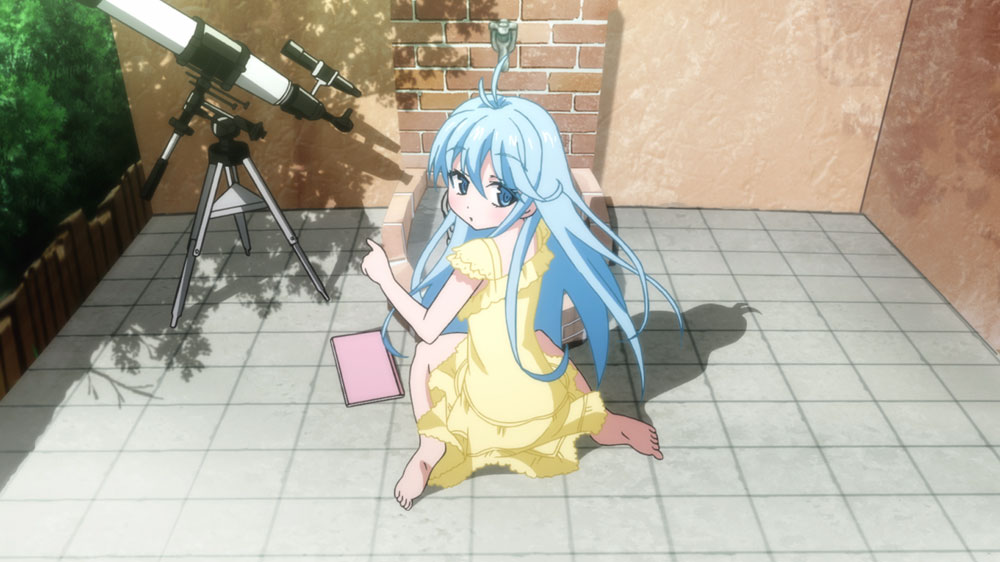 As this is the first standard edition release we’ve covered from NIS America, it bears mentioning that this one fits that label indeed, offering little in the way of bonus features. Then again, it’s also a relatively inexpensive Blu-ray/DVD combo pack and includes a cute episode guide leaflet, so it’s tough to expect more.
Ground Control to Psychoelectric Girl is one of the finer slice of life anime out there as it’s crammed with more thought-provoking themes to digest than the genre’s light-hearted structure usually permits. If you do want a show to enjoy with your brain turned off, though, the slightly risqué comedy and many gaming references can keep the bliss coming on their own.