This anime could not have been easy to localise. In fact, I’m surprised that anyone even tried. Bakemonogatari comes to us from Nisio Isin, the young Japanese wordsmith who is rapidly developing a reputation for being something well beyond his peers in the light novel space. Bakenomogatari is dense, intense, and very difficult to understand at times. However, unpacking the anime bit by bit reveals it to be something truly intelligent.

Isin is best known in Japan for the way he plays with language, filling his dialogue with puns, double-meanings and rapid-fire back and forth. It’s a narrative approach that is difficult to translate from one language into another one, because words and sentence structure is different from one language to the next, and often this kind of narrative construction also relies on cultural meaning, which doesn’t necessarily translate even when the words do.

This in turn means that even the best translation needs to take jumps in order to be comprehensible to the audience, if not completely re-write entire passages, when looking at a work that is heavy on the word play. Bakemonogatari is well (well) beyond my limited knowledge of Japanese, but I suspect that’s the case here too. Thankfully for those who do know Japanese, the localised DVD is subtitles-only, so you’ll be able to simply listen to the Japanese dialogue instead of relying on the translation. 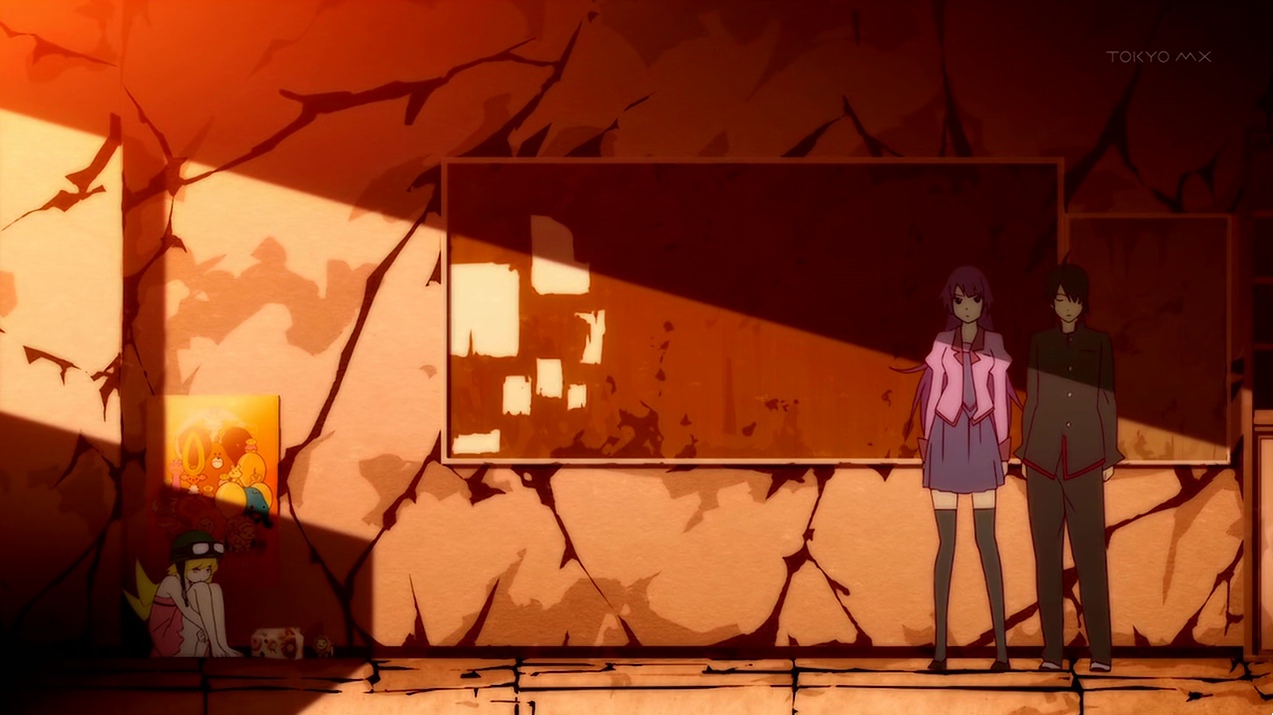 In addition to the challenging translation, the sheer speed in which characters talk to one another, and the scattershot visual style in which the camera snaps between dramatic perspectives at a kinetic speed took me back to my university years as I was watching Bakemonogatari. Studying literature, philosophy and film, I would regularly find myself re-reading chapters of philosophy books over and over again, or rewinding sections of a film in order to effectively unpack the meaning in it. I think this is the first anime I’ve ever watched where I’ve done that. Numerous times while watching Bakemonogatari I’ve needed to make use of the scene rewind function to re-watch entire sections. In fact, I’m still not entirely convinced that I “get” what it’s all about, because at regular moments this anime jumps into some truly surrealist moments that rival the likes of the ending of 2001: A Space Odyssey, but I’m enjoying the process of learning this fiction and world. 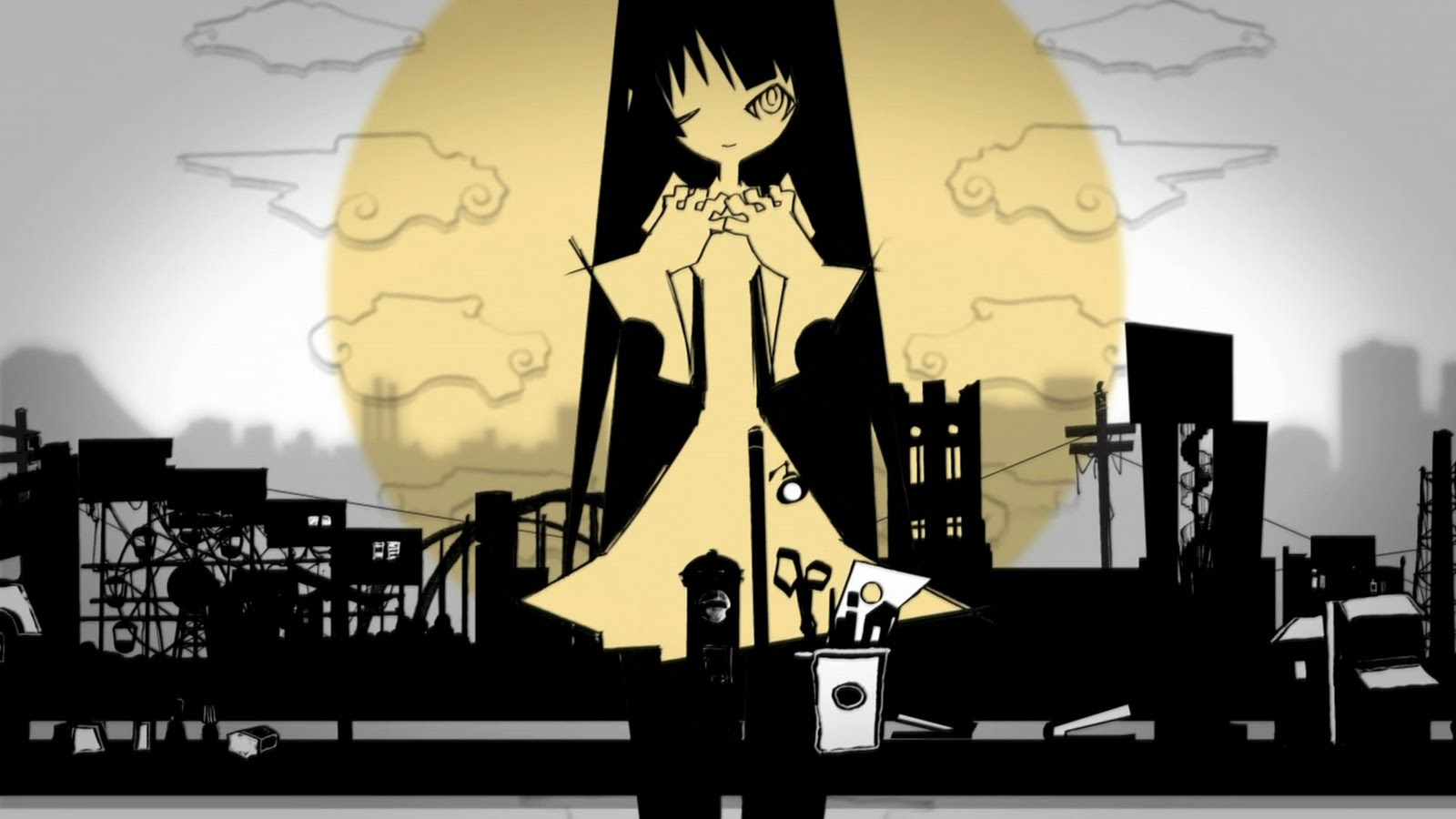 The basic (and I really do mean basic) idea of the plot is that Koyomi Araragi runs around the place helping people with their real problems given supernatural form. More than a little pathetic, Koyomi is a virgin and socially awkward, but his desire to help others is overwhelming.

Those that he tries to help are broken souls, however, and Bakemonogatari goes into some very dark places indeed. One girl recounts how she was forced to protect herself from a rapist as her mother stood to the side, unwilling to step in and help. Another girl turns out to be a ghost, stuck in the world after witnessing a bad divorce between her parents, and then being hit by a car when en route to visit her mother, whose “face she had forgotten.” The writer, Isin, handled these themes with an oddly dry and dark sense of humour which turns Bakemonogatari into, loosely, a harem tale where the lead male character finds him in embarrassed over and over again by a the group of women that are all vying for his attention. But the themes are also treated with the seriousness that they demand at the most critical dramatic moments, making for a true oddity – the way that the anime deconstructs the harem genre which is so often the bottom of the integrity barrel, and then rebuilds it in a mature and meaningful manner is a breathtaking example of postmodernist storytelling. 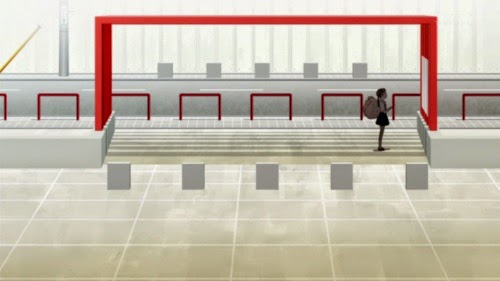 The visual imagery is truly striking, too. With most anime the art is functional – designed to provide the framework for the action. characters talk, hit one another, and there’s a background setting the scene. It’s only when you get look at the works of, say, Studio Ghibli, that you see the art and environment being used to support the narrative as you might expect from a film with a carefully constructed scene, and Bakemonogatari is another example of the latter. As I mentioned before the cinematic framing of the animation is kinetic, and is laden with visual motifs, sharp camera angles, and rich, vibrant colours. Environments are carefully built to have a meaning of their own, with unique and effective architecture and animation is used to carefully draw the eye to key points of interest – whether that be the characters or something in the background. I’ve honestly not seen any anime as fundamentally effective as this on a visual thematic level, but if you’ve ever seen arthouse cinema from Europe, it’s the closest comparison I can make.

Because of the visual density of Bakemonogatari, I found it difficult to watch more than one episode at a time, in contrast to, say, the Persona 4 Animation, where I watched the entire thing from start to finish in a day. But as drained as this anime left me, I also came away from the experience invigorated and thinking quite deeply about what I had just seen. Anime is a little like the games industry at times in that the broader art community doesn’t necessarily have a great deal of respect for it. “Pop culture trash” tends to be the way its described by folks who spend most of their lives buried in low-budget arthouse film and literature. But Bakemonogatari is like Journey, Shadow of the Colossus or Danganronpa; it’s an intelligent near-genius work of art that is tragically watched by only a small niche, but for that niche stands as proof of its potential for having artistic meaning. 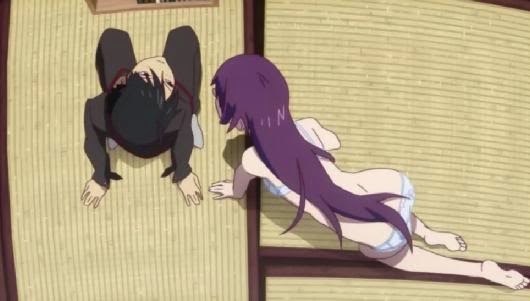 The DVD package itself is gorgeous. The DVD itself is a little light on extra features (some commentaries, and promos… the usual bits really), but the discs come housed within two hard cover, glossy page books that have a useful summary of the characters and setting, and then gorgeous stills from the gorgeous animation. With video content moving ever more towards download distribution, it’s packages like this that give fans a genuine reason to keep buying the physical product. Kudos to publisher, Hanabee, for this one.