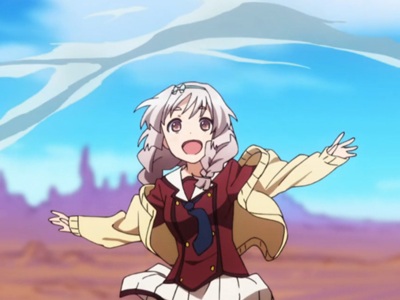 What happens when five high school students gain such superpowers as time control, elemental manipulation, and flame manifestation? Almost nothing, apparently. In Studio Trigger’s comedic When Supernatural Battles Became Commonplace, there are neither grand villains to be combated nor the need to thrust vigilante justice upon the populace. There is, however, plenty of classroom inanity that has already surpassed the peaks of similar shows in terms of raw hilarity in a single episode.
The first episode starts off by depicting the menial school lives of the members of one high school’s literature club. During a meeting one day, a member brashly claims that human beings have the potential to gain comic book-esque abilities and that there’s no reason it couldn’t happen to them, much to the chagrin of his peers. Sure enough, each member of the group is bestowed with superhuman abilities just seconds later.
Cue a hasty six month time skip and their lives are still virtually identical. The literature club holds their meetings in the same room with the same members, engaging in the same activities. The students’ abilities rarely see any use besides a monthly power testing session designed to gauge the strength of their abilities through friendly competition. That and many power-related gags, anyway. 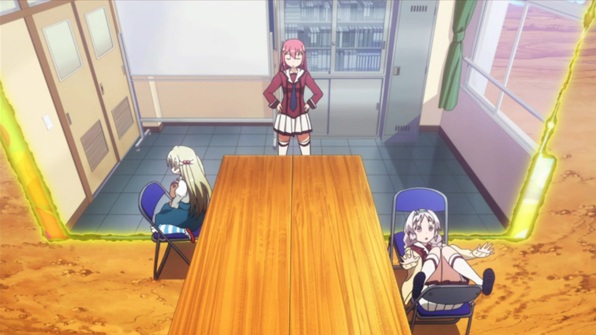 Virtually the entirety of the episode is spent in the student council’s room but it’s easy to forget how relaxed and confined this anime is because of the sheer zaniness of the characters. Main protagonist Jurai Ando absolutely steals the show despite the tendency of male leads to falter when placed in circumstances with harem-like gender distribution. Afflicted by chunibyo (a fictional syndrome that causes eighth graders to perceive themselves as magic-wielding dark lords and the like), the young chap spouts off golden dialogue like it’s going out of style.
The hilarity only escalates when his crackpot theories and claims turn out to be true. More than once, Ando’s feisty rants had direct ramifications on the world’s happenings, which seems like it’s going to be a running gag from here on out.
As a result of his aforementioned delusions, Ando is not your typical do-gooder protagonist either. He’s very much in the face of the other characters, stirring up a ruckus with various shenanigans in his lust for attention and acceptance. It’s miraculous that his tomfoolery doesn’t come off as obnoxious to the viewer, frankly. But best of all are his longwinded, pseudo-philosophical rants about his alleged powers, which are fuelled by utter conviction. The writers have deliberately interlaced gratuitous, over the top shounen battle clichés into his speeches and they’re all the better for it. 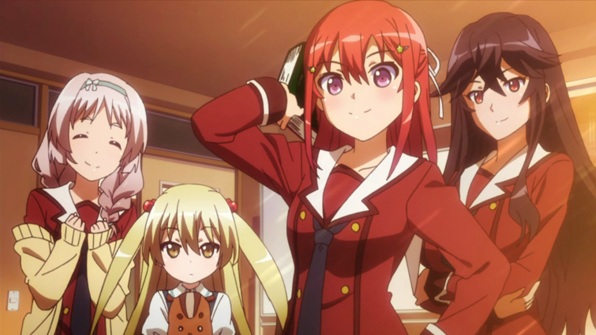 I also appreciate the unhealthy volume of irony being worked into this anime. Ando seems to be the very reason anyone has powers and was the one who wanted them, but out of all the potentially world-changing abilities the cast has, Ando’s is deemed near-useless. Better yet is when the cast meets what I assume will be the closest thing this show has to a “villain” and they have to defeat her by… forgoing their superpowers in the most anticlimactic manner possible.
The episode ended on something of a cliffhanger, but knowing this show’s perverse writing, there’s a decent chance it will be rendered irrelevant within minutes. And I don’t mind either way because if the script for episode two is written half as well as the pilot, I’ll be chuckling for the rest of the week. You can tell Studio Trigger was behind this one as, even if it’s not responsible for the source material, the style of humour present in Kill la Kill is here and cranked up to eleven.