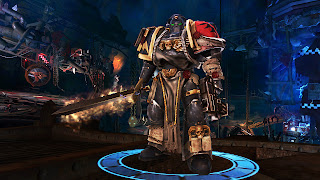 When I was a kid, I sat for hours on end playing Warhammer 40k with my friends. We played Epic scale, the standard game… we even made up games with our own rules cherry picked from dozens of other miniature table top games. I was really into it. I’ve long since stopped playing tabletop RPG’s, but I don’t like the dark sci-fi world of 40k any less. So when I heard that a new title was on the horizon for XBLA, I had one thought: will it uphold the honor and glory of the Emperor?

For a fictional universe that has almost as much detail and history as the real one, the tale behind Kill Team is very straight forward, which maybe should be expected since we’re talking about a twin stick shooter here. In a nutshell, a massive Ork Kroozer is headed towards an Imperial Forge world on a declaration of war. Now, for those who don’t know – the setting of 40k is very much a classic fantasy one that contains all the trappings that you’d expect it to, the trick is that it’s set in the far future (… and there is only war) which shakes things up considerably.

The forge world is, in effect, a weapons factory for the Imperium of Man. The Orks are gonna crash into it and tear it apart. That’s something that the Empire’s elite fighting force, the Space Marines, cannot allow. So (for some reason) the Marines forgo a full on assault on the greenskins, instead opting for the insertion of a small kill team tasked with sabotaging the craft from the inside and stopping the assault.

Up to two marines can fight side by side in a same screen co-op campaign in Kill Team, which is great but why not offer a four player mode? The zoomed out play field could easily support a quartet of troops and there are actually four different marine classes that you can choose from (each with their own strengths and weaknesses) so it would have made complete sense here. Even though this is a well polished title that doesn’t feel rushed, I can only think that the game had to get out the door and the four player mode was dropped. After all, there’s an unlockable chainsword (exactly what it sounds like) that can be used in the forthcoming Space Marine retail release hidden away in Kill Team. The point there being that the two games had to be released relatively close to one another.

Although maybe ‘hidden away’ is a poor choice of words considering that all you have to do to get it is to beat the first stage. Not much of a challenge.

Which is not to say that this game is a cake walk. Although the first few levels are fairly easy affairs, you’ll soon be caught up in a battle of attrition with the unending hordes of enemies that threaten to overwhelm you. Although the odds never feel impossible as keeping your bolter pumping round after round, meleeing a goblin that got a little too close, then grabbing that health power-up all works so well that you won’t lose your cool. To put it simply- I really liked the controls in Kill Team.

They’re very straight forward and very streamlined. You have your weapon, your melee weapon, your grenades and pickups, etc… For this kind of a game (really an arcade-style shooter) the simpler you keep the interface, the more successful the player will be. THQ seems like they understood this and did a great job with it.

They also did a pretty nice job with the graphics because Kill Team looks very good. It won’t knock you over, but the levels and characters (both player and otherwise) look great. Detail abounds pretty much everywhere you go on the Kroozer and all the different foes you face, green and otherwise, look just as good and are equally well animated. They even sound the part!

Way too often in these kinds of games the sound design is such a secondary focus that it’s not even worth discussing- but not here. Thought the score itself is nothing to write home about, the effects and voices are excellent. In particular, I really enjoyed the dry, commanding tone of the narrator. “Purge the Xenos”. Classic.

There’s a lot to like here, especially if you’re a Warhammer 40k fan, but even if you just like a fun arcade shooter, you shouldn’t have any trouble finding something to make you smile in Kill Team. This is good stuff that could have just been some plain, generic, cash-in to try to make a little extra coin off of the retail game. But give credit where it’s due – THQ did a great job and produced a well crafted romp that does the license justice – even if it is a little shallow.

Digitally Downloaded poll results #2: What is your preferred gaming device?