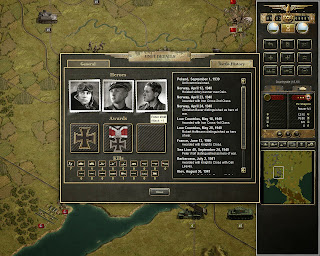 There is so much to admire about Slitherine’s approach to iOS development. Rather than try and force free-to-play mechanics into its very complex and deep games, and rather than try to compete with Angry Birds and other $0.99 apps, Slitherine is comfortable charging premium prices of $20 or more for its games, and accepting that not everyone will buy them at that price. It is seeing genuine success from that model, and more importantly, it’s a sustainable kind of success; this is not a company that needs a new Angry Birds in order to stay afloat.

Of course this strategy could only work if the premium priced games were also premium quality. Panzer Corps is. This wargame for wargamers is rich, expansive, and meticulously researched, and it’s one of the finest recreations of World War 2 you’ll find anywhere.

I loved the PC version of the game when it was released some time ago, and I love the quality of this port. While maintaining much the same interface as the PC version Panzer Corps features clear icons, easily-accessible critical information about units and their many statistics (and there are a lot of units to play around with in this game), and an easily zoomable map which is critical for keeping track of what is happening on the grand scale of things. 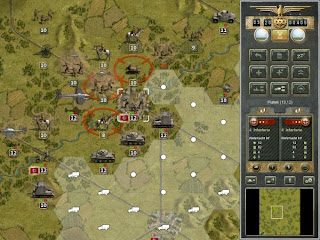 It’s easy to play, in other words, and no one would be able to play this version of the game and claim it’s in any way inferior to the PC original release. So immediately it’s worth the same price as its PC counterpart, and if you’re happy with a download (rather than a boxed version) of the PC game, that’s exactly what Panzer Corps is on the iPad; the same price.

Now for those who aren’t familiar with Panzer Corps, this game is a spiritual successor to the old (and still rightly loved) Panzer General games. Across a wide range of real conflicts within World War 2 players will need to manoeuvre a massive range of units, capture cities, upgrade veteran units as the fight in skirmishes, and buy replacements for the inevitable losses. Resources are automatically generated each turn, and of course there are nowhere near enough to buy everything that a player might want to, and so careful management across the sprawling maps will be necessary to plug holes in defensive lines or prevent units from being outflanked.

Supply plays a critical role and is abstracted to a degree of simplicity, but still accurate enough to come into play during the same campaigns that saw supply shortages become a critical factor in determining the results of the conflicts (so for instance the Axis’ drive on Moscow). Nations each have their own units, strengths, and weaknesses, and in certain battles it is really difficult to win a battle as the side that lost historically. So, for instance, good luck if you want to play as Poland. 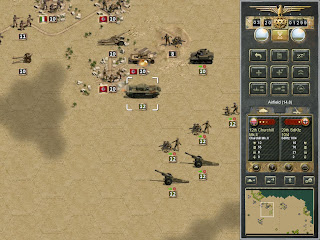 Forces are abstracted down to a health rating out of 10, and a host of statistics crunching along in the background that determine how much damage is done and taken in a firefight. Terrain, unit experience and morale all have an effect, and it’s also possible to rope artillery in for supporting fire. While on the surface this system isn’t that different from a simple strategy game like Advance Wars on consoles, or Tank Operations on the PC, it’s the weight of numbers in the virtual spreadsheets running in the background that make Panzer Corps a far more complex experience.

There’s a random element that make things more complicated as well. Before a firefight, the game will provide an expected result in terms of losses, but that’s not a guarantee. It’s entirely possible that you’ll hit the “fire!” button expecting a rout only to be routed. Is this frustrating at times? Absolutely, but it’s not the AI cheating (the results are as uneven at the lowest AI settings as at the highest). It’s simply a recreation of the randomness that does impact on real battlefields. The expected results are generally accurate, it must be said, it just pays to have a contingency plan in the event that things go wrong, just as a real general would.

There’s Slitherine’s standard foolproof multiplayer features, allowing players to really get strategic against real minds and try to change the course of history. While multiplayer will always be the way to go with serious strategy games, the AI for this title puts up a stiff challenge on the higher levels.

Coming so close to Shenandoah Studio’s Drive on Moscow board game, Panzer Corps is the perfect way to round out the year for armchair generals with iPads. The hardcore strategy game is one of the rare genres where the experience is better on the iPad than the other portable gaming platforms (unless you’ve got a gaming laptop, of course), so if you do fancy yourself a bit of a World War 2 aficionado, then be sure you’ve got yourself an iPad and this title.