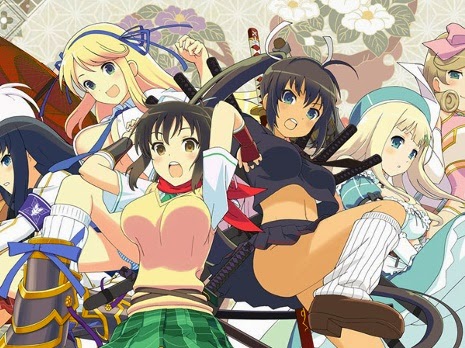 Let’s get this out of the way from the outset: Senran Kagura: Ninja Flash! isn’t just a mild concentration of fanservice. It is more like a distilled form of fanservice that is so pure and concentrated that unless you have spent years building up a resistance to it, it’s going to knock you out instantly.

Yes, I just compared “learning” how to drink whiskey or rum straight to “learning” how to watch Senran Kagura. Which is appropriate because, well, this is an anime that is also best enjoyed after a few stiff shots of bourbon.

There’s no pretense about the fanservice, either. The narrator goes out of his way to explain that it is in the pursuit of fanservice that everything within the anime is constructed for the explicit purpose of giving you an eye full of flesh. One of the characters has a “personality quirk” that demands she shove her hands up the shirt of another girl to fondle her whenever they’re in the same room together. As with the games, when the girls are fighting, they can become more powerful by “transforming” – a process where they magically strip down to their underthings and then are re-clothed in something far more revealing, and likewise, as they take damage in battle pieces of their clothing are strategically ripped. 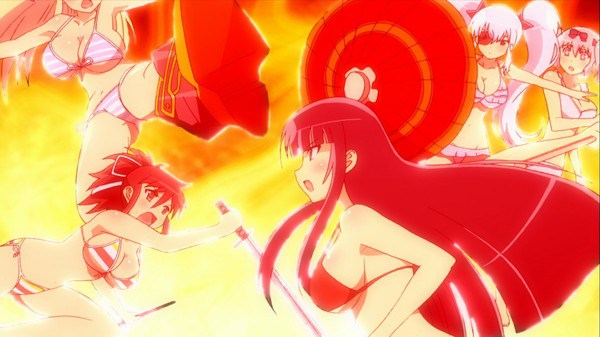 Now in that context it’s going to be really difficult to explain why I actually like Senran Kagura without sounding like a pervert, but I’ll give it my best shot because I do actually enjoy this anime.

Much like the game series, Senran Kagura does have something of a point to make with regards to the excess fan service. It’s not making an excuse out of the fact that it’s a comedy, because being a comedy doesn’t necessarily excuse a work if it’s still filled with exploitative themes. Rather, Ninja Flash! is a specific parody of a certain cultural quirk in Japan, and it holds some kind of value as a satire of that culture.

‘Chuunibyou’ is a phase that many Japanese kids go through (actually, kids throughout the whole world go through it, but in Japan they actually have a word for it). It’s a slang word, and approximately means “middle school second year syndrome”. Those kids that think they know everything and try to act like an adult? That’s a chuunibyou. The kids that believe, or pretend that they have unique special abilities (whether something as basic as being fluent in a language that no one else knows, or something as extreme as believing they have actual magic powers) are another kind of chuunibyou. Of course, most people grow out of such “boasts” by the time they’re adults, but within schools there are typically a lot of people who believe they are more than they are. 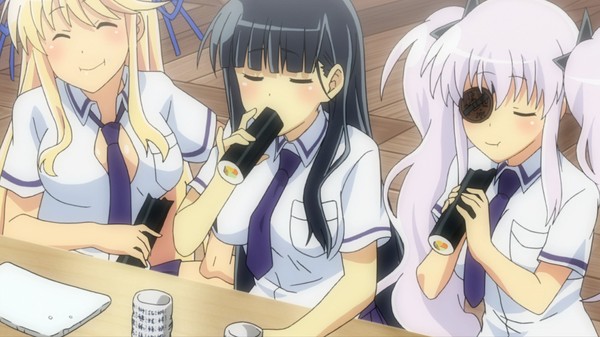 But Senran Kagura does things a little differently. Each of the girls in the anime is an incredibly powerful ninja (despite being mere apprentices), but they exist within a world that is otherwise normal, and they need to be separated from the rest of their society to preserve their “secret”. They attend school and fight in secret, even having powers that conceal their presence from the general population when battling with evil ninjas.

In other words, the anime is playing on what is playing on the whole dream of the chuunibyou. But what is amusing is that, unlike the harem genre, Senran Kagura doesn’t really have a male lead character, despite being an anime specifically playing to the dreams of the male chuunibyou (a significant subset of which are otaku males and the idea of being surrounded by gorgeous, big-breasted women is incredibly appealing). In this context the anime takes on mocking “you can look but in your dreams, buddy” tone, and there’s something of a social criticisim in that. 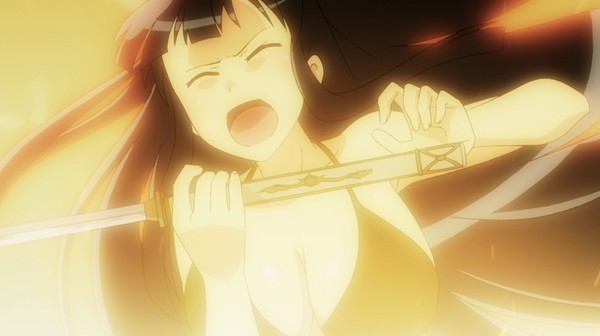 With all that being said it’s not an overly well written narrative, and is clearly exploitative. Your enjoyment of this anime will greatly depend on your tolerance for a level of fanservice well beyond even the games games. It’s also an anime that was clearly made on a limite budget and for the most part looks quite simple. It’s fun, it’s enjoyable, it’s more intelligent that most people with give it credit for, but it’s also by no means a classic. But you knew that before even reading this review, right?