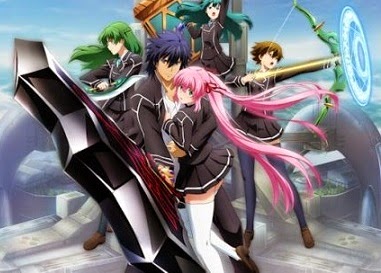 Aesthetica of a Rogue Hero is not an anime you want to watch in public. We have rules about posting certain images on this website, but if you’re looking for a real representation of what this show is about, do a Google search with safe search turned off.

But I will say that it is an adult anime. There isn’t a single episode where breasts are not exposed. The girls wear skirts so short that they’d be considered indecent in the real world, and the camera is often positioned nice and low, for obvious reasons. It goes without saying that there is plenty of sexual innuendo. And it’s not always a pleasant kind of voyeurism; the lead character is a male with a singular ability to steal the underwear of any nearby girl, without her being aware of it happening. He also has the odd ability to stand high on he wall near the ceiling. He uses that ability to casually watch women in the shower, change room, and so on. A wonderful, productive way to use supernatural powers for the good of everything, of course.

Despite all that I’ve outlined above, this show is not pornographic. It’s not even erotica. Aesthetica of a Rogue Hero is a light action series. If you think a version of Bleach where Orihime can’t seem to keep her top on, or One Piece with Nami shower scenes thrown in, then you’re at Aesthetica. The central narrative stars Akatsuki Ousawa, a powerful man who kills a demon king in another world, and escapes back into the real world accompanied by Myuu, the demon king’s daughter. She poses as his sister, and the story begins. 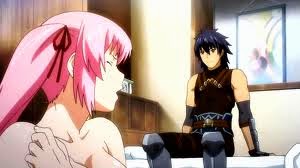 Oh, and she’s got big breasts. Just in case you were wondering. The very first time we see Myuu she’s completely naked, and we see her naked over and over again. The whole nudity thing becomes oddly blasé by the end of the show.

The series of 12 episodes is broken down into a main story arc where Akatsuki, Myuu, and their friends from a school for the magically gifted battle against a range of enemies, which range from your standard hapless humans, through to super powered bad guys and even the odd monster. Within these episodes there’s a regular series of new objects introduced to reinforce for the audience just how powerful Akatsuki is. The episode where Akatsuki tames a magical motorcycle, Sleipnir, is especially good fun.

If you’ve seen other action/ adventure anime in the past, then you’ll be more or less familiar with where Aesthetica is going from its start through to its conclusion. The difference is that it’s not paced as well as in more well-known anime series, and that’s very likely because the writers were clearly given a mandate to include at least one scene where girls get naked. These scenes are designed to be amusing, or, rarely, build up characterisation (often by showing Akatsuki with a sympathetic side that aims of offset how incredibly creepy he is the rest of the time). 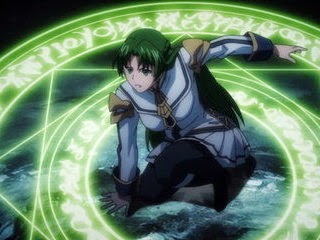 These main story episodes are broken up with episodes that are only vaguely related to the main story, and instead comprise of pure fan service, and are designed to up the humour as far as possible. The episode where Myuu goes underwear shopping being an example of this. Once again, there is plenty of nudity in these episodes, but the more outright silly plotlines, uninhibited by the need to provide action or a broader narrative arc, are generally more effective at creating consistency.

Not much of this show is sincere, even by the standards of shows set up as pure fanservice. It’s also not going to be especially funny unless you have a very, very specific sense of humour whereby a pervert “hero” and his antics can get you to chuckle.

As for the DVD itself, there’s a couple of bonus features, with commentaries and bonus videos. The quality of the animation is itself quite good; there’s a greater sense of movement and fewer static images in this show than some other anime.

I can’t say that everyone will enjoy this series, but if you don’t mind adult entertainment and humour, then the silliness of Aesthetica will give you a good laugh or two.