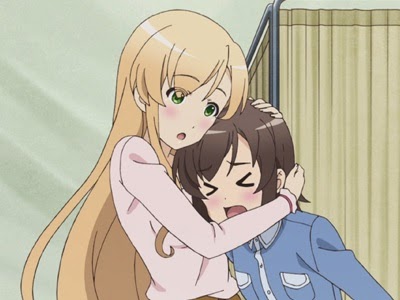 Locodol might have gone under the radar for many anime fans during the summer season, but we fully appreciated its zaniness week in and week out. Two not-quite-idols struggling to stimulate their town’s economy provided a solid basis for steady development, gags galore, and, occasionally, legitimately creative territory for the genre.

If you dug the show as well, you’ll no doubt be pleased to hear that Crunchyroll is hosting what is essentially the thirteenth episode of the series later today. Japanese audiences were originally able to see the unaired episode late September back in 63 as a part of a physical bundle release.

Now, Locodol getting an OVA isn’t exactly blockbuster news in and of itself; the niche nature of this show isn’t going to draw in the masses and plenty of similarly popular shows have been treated to bonus episodes. What’s intriguing is that Crunchyroll, a service not exactly renowned for an illustrious lineup of OVAs (much less hosting simulcasts of them.), is bothering to bring it to a near-worldwide audience.

For those not in the know, OVA or Original Video Animation is an umbrella term typically used to describe an anime episode or film that goes straight to home video. Oftentimes these releases are minor special episodes that fall through the cracks as they’re typically licensed separately from their television show counterparts.

For every series where these bonus episodes are just a fun little extra, though, there are outliers like Bakemonogatari wherein the OVAs are crucial to the central plot. If you decide to experience Monogatari through Crunchyroll, you’ll miss out on a ton and might not even realise it without conducting a bit of research.

It’s not just Crunchyroll that often forgoes OVAs, sadly. Those seeking legal methods to hunt them down often find themselves waiting years for a DVD/Blu-ray release that may or may not even bother including them. The mere suggestion that more streaming services could pick up OVAs despite the potential hassle associated with licensing them is enticing indeed.

Yes, I’m making a mountain out of a molehill with all this, but I’m also just thrilled that Locodol of all shows is seeing special treatment.