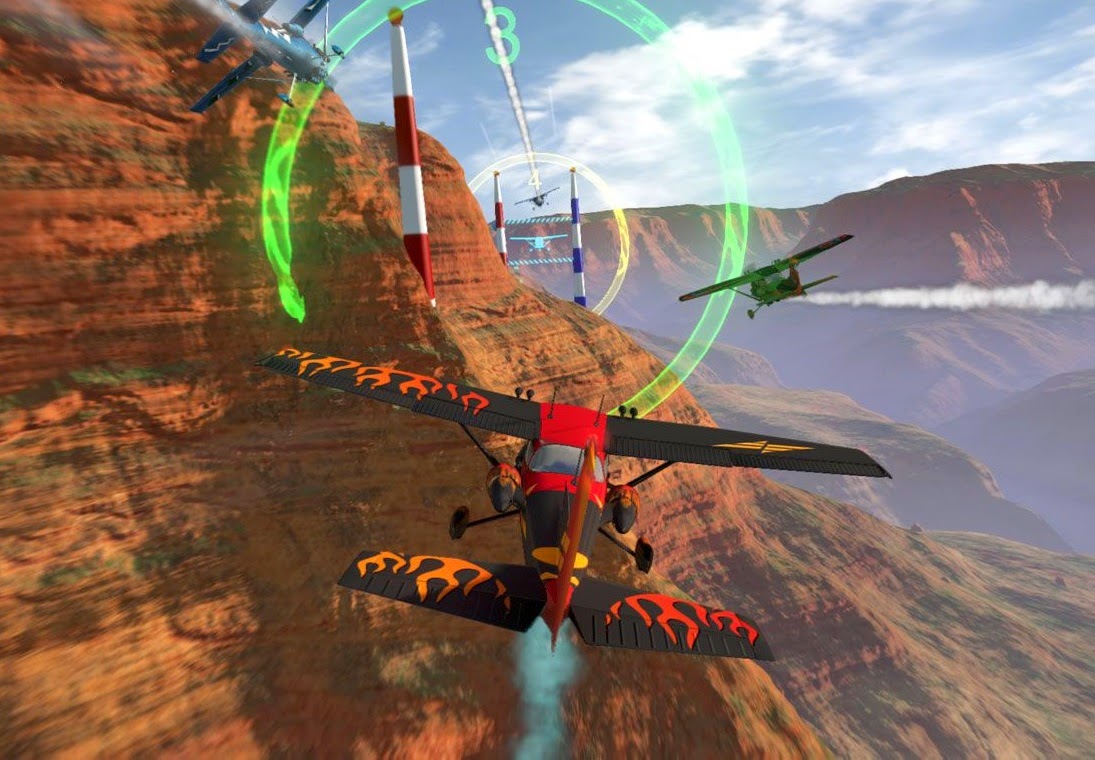 Nearly two years ago, when Steam Greenlight was in its infancy, several of our team pitched our most anticipated titles that we wanted to see receive the elusive ‘green light’. One of my two picks was Altitude0: Lower and Faster. This air plane racing title looked to be right up this wannabe pilot’s alley.

In those early chaotic days of Steam Greenlight, the duo indie team of Gugila made the executive decision to remove the game from the service and has spent the past two years hard at work bringing the game to life. Today, it’s now available in beta access on Desura and has finally been greenlit on Steam, bringing the beta action onto that platform later this year. We’ve gotten the chance to strap in and take to the skies of Altitude0 and I can honestly say that the long wait was definitely worth it.

There’s a perfect mix of simulation styled game play and arcade action found in the skies of Altitude0. While another hit indie aerial racing title, Skydrift, focuses on power-ups and high speed thrills, Altitude0 is much more skill based in its approach. Even in its Arcade controls settings, which eliminates the need to roll the plane when making left and right turns, there’s still a slight simulation feel to the controls, and it’s those whom enjoy the simulation settings that will find the most enjoyment here.

While the controls might feel like a simulation, bump a wall or gate post while in-flight and the arcade aspects of the game are revealed, when the plane simply ricochets off and takes minimal damage – showcasing the game’s comical soft body deformation damage engine, which can, at times, have parts of the plane barely hanging on yet still flying. If it sounds crazy, that’s because it is, but it’s wildly addictive and terribly difficult to put down.

Flying in third person view, the game starts off on short tracks with only a handful of gates to fly through. At first, I crashed. Then I crashed again. And again, and another crash and then I crash yet again. Thankfully, a hard impact crash quickly resets the plane at the last checkpoint crossed and only ticks the plane’s damage meter up a notch. Still, it can be a bit frustrating… at first. Starting tracks keep the landmass obstacles to a minimum – keeping the focus to gate navigation – yet even here it becomes quickly apparent that anticipation and track memorization are critical to success. As one with considerable skill in flight games, it was only within a handful of hours that I found myself crossing gates with my trajectory already lined up with the next gate in repetition. A few more hours of play and the game stopped being about me attempting to finish a course and I shifted gears into racing mode, both against my opponents and leaderboards. 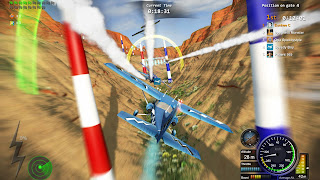 When Real Racing 3 raced to the scene in the early parts of 2013, the highlight of the title (for me) was its fantastic asymmetrical online multiplayer. We’ve since seen this revolutionary style of online play made use of a few times since then, but it’s a perfect fit in Altitude0. Starting off in the “License” stages of the game, all of the opponents faced are a ghost of other racers fastest times. Those whom enjoy racking up top leaderboard times, I’ve spent hours doing nothing but shaving precious seconds off my times to put my custom avatar at the top of several of the game’s tracks, and I keep going back for more.

Still, it’s not all about winning races here; instead, working through the license stages finds a unique progression structure. The first task is indeed straightforward, but necessary, as it allows time for the track to be learned: achieve a top three finish on a track. Once that’s completed, a new set of challenging achievements that need to be completed become available on both new and previous tracks. These achievements range from keeping a low altitude throughout a race to racking up stunt points by completing barrel rolls and crossing specific gates with the plane at a pre-set angle. This format brings great variety to the races and is all before the Championship Mode that offers a number of series to race through, and new planes, upgrades and paint schemes start getting unlocked. Oh, and about that “Lower and Faster” subtitle; keeping the plane low to the ground puts all sorts of obstacles in the way and the skills needed to navigate them climbs exponentially higher, but with increased risk comes great rewards: speed.

Altitude0: Lower and Faster is a wildly ambitious project from a very small duo indie team, but one that it is shaping up to be a challenging and highly addictive aerial racing sim with an arcade touch that gives it a great sense of style and personality. The game is now available to purchase in beta access on Desura and will land on Steam in Early Access later this year. Virtual pilots take note, this one is worth putting in your logbook.