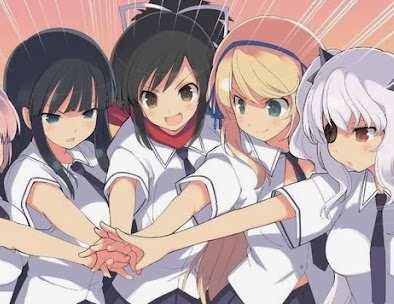 Normally, when writing a review for a game, convention would suggest that the author stick to analysing the game itself. But with Senran Kagura Burst I find that impossible, because in the lead up to its release the game has been tainted thanks to a ill-informed piece appearing on Official Nintendo Magazine’s website. And now it’s impossible to discuss the game without first addressing the complaints raised in that article.

Based purely on having seen video footage and screenshots, the writer of Senran Kagura Burst is damaging the industry – here’s how to stop it wants to shame us all who do play the game, much less enjoy it. In playing the game we’re meant to feel bad that we’re tacitly supporting the exploitation and sexualisation of female characters in games, and by doing that we’ll make the feminists sad. And if enough of us play the game that it becomes a commercial success, then the writer is scared that we’ll be encouraging game developers to make even more of these kinds of exploitative games, and before we know it even Call of Duty will stop being about shooting soldiers in the head and making their brains explode. Oh no, the future Call of Duty will replace the dudebro soldiers with busty women and we’ll get extra points for shooting their bra straps to make their cleveage pop out, and that’s just so much less wholesome then the aforementioned head shots.

Just to be clear, I find the arguments laid out in that article to be ridiculous. I identify with feminism myself, and I too consider genuine cases of exploitation to be a terrible thing. But (and this is a big but), “exploitation” and “busty women” are not synonyms. Just as the bulk of the critical body misunderstood both Lollipop Chainsaw and Killer is Dead in calling those games “exploitative,” this Official Nintendo Magazine writer has fundamentally misunderstood what Senran Kagura Burst is really looking to achieve in its aesthetic direction. Frankly, ignorant writers dumping ill-informed opinion pieces on readers is what is really damaging the gaming industry. 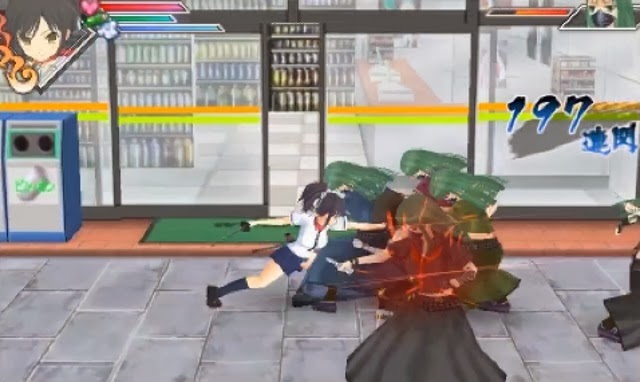 So if Senran Kagura Burst isn’t exploitative, what is it looking to achieve? Having played the game for many hours now (in other words, not basing my opinion on a screenshot or trailer), I would argue that the game is not so much exploitative as a reaction to exploitation. It’s possible to be critical of tropes in games in a number of ways; you can achieve it through sheer anger, but you can also use humour to make a point. And Senran Kagura Burst is a game which never passes up an opportunity to indulge in humour, with the visual style being firmly tounge-in-cheek. Characters are way over the top, making the Dead or Alive girls look positively natural by comparison, and yes, as they take damage their clothing starts to tear off. But none of this is titilating, because it is so far over the top that it could only possibly be self referential. In discussing exploitation, the artist’s intent should be considered, and when you set out to make fun of a trope, you’re not actually condoning it.

Now, of course, it can be argued that Senran Kagura Burst fails as a piece of self-referential humour. I’ll leave that debate for the comments section, but I personally found it quite effective. For me, the game was remarkably effective in highlighting just how ridiculous sexualising anime characters are. I couldn’t take anything about the game’s aesthetic design seriously, and I certainly wasn’t turned on while playing, and therefore the game checks the same boxes as Lollipop Chainsaw and Killer Is Dead as a humourous criticism of sexualisation rather than a promotion of it.

The other clue is in the game’s narrative, which is surprisingly sincere, and told through extensive text-based cut scenes. During these cut scenes, and when the game does decide to be briefly serious, the characters aren’t even on the screen – it’s a static background environment, text… and that’s it. 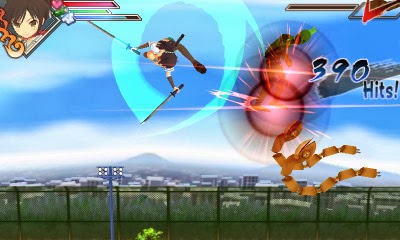 Many will pass that narrative off as the “dull” side of the game, but regardless of whether the script is written well (I believe it is in a generic anime storytelling kind of way), it’s the contrast between the non-sexualised serious content and the hyper-sexualised humour that clues me in that Senran Kagura Burst’s aesthetic design is not a serious as a piece of exploitation. It’s more of an in-joke, or gentle ribbing of the Akihabara culture in Japan, where the less socially adjusted fans do take this nonsense seriously than any real goal of giving male players erections and unhealthy expectations of their female partners should they ever find a date.

On a broader note, looking beyond this game specifically, I find the critical dialogue around sex themes in games to be incredibly limited. Too many in the media don’t properly understand feminist debate and assume that sexualisation is automatically condemnable. Too many in the media fail to understand the Japanese context and understand their how their cultural sense of humour enables self-referential criticism within their art, and too many in the media are quick to jump to assumptions based on a limited exposure to a work. In short, the media, as exemplified by the horrible ONM article, is too quick to see things in black and white terms where sex is concerned. It’s born of ignorance, and it’s doing a bigger disservice to the industry than the games that they’re criticising, since the development of games as an art form requires more intelligent discussions around themes like sex than we’re currently seeing.

Now, back to the game; it’s a pity that the discussions of Senran Kagura Burst has been so overshadowed by the nonsense around its theme, because underneath the sexualisation is a game genuinely worthy of note. I can’t stand brawlers generally, and I loved this one. Not because I’m attracted to animated characters, but because it’s a heck of an entertaining game. 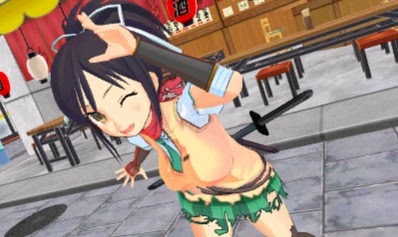 The key word I keep coming back to with Senran Kagura Burst is “fluidity” – while each of the dozen playable characters feel fundamentally different in terms of how they fight, they all share a common theme in that they’re incredibly mobile, and the combat system is both easy to come to grips with while allowing the more difficult levels to seriously challenge players.

The core of the combat system is using combos to launch an enemy (or preferably group of enemies) into the sky, whereby you’ll be able to juggle them for a lot of damage. In addition, each character has an emergency move that will drain some of their health in order to clear an area of enemies (especially useful when surrounded), and a few special abilities that they’re able to use once they’ve activated their “burst” abilities. The only flaw in the system is that defensive options are few, with no dedicated block button and a laggy and imprecise dodge mechanic, but the combat is so free-flowing that playing aggressive was always going to be more fun.

Enemies themselves are more fodder than anything else, though being surrounded by them can cause some frustration where chains of damage can take you out of commission for far too long; there’s nothing more frustrating than watching your character get hit by a series of attacks with no way of getting out of the chain. Bosses have a lot of health and some special abilities of their own, but in one-on-one battles I found things a touch too easy, even on the higher difficulty levels. 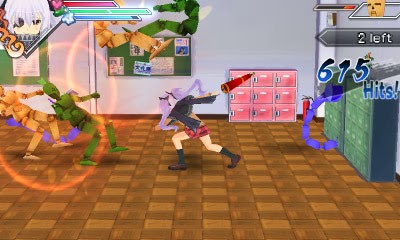 There are dozens and dozens of missions in the game, and each character has a simple levelling system which helps create a sensation of progression, as there are some pretty spectacular special attacks to be unlocked by levelling up. Each mission is quite replayable too. With story missions the first time a level is played players are required to use a specific character, but after that they can try and better the scores by playing as a different character. Unsurprisingly, given the theme of the game, there are also a lot of unlockable costumes and accessories, and this serves as the primary reward for working through the game.

There’s a lot of environments to fight through as well, though they are mostly superficial background palette swaps; aside from slightly different objects to destroy for health pickups and the like (a city street has a bike parked on the sidewalk, the school environment has a trash can), the levels are generic arenas. The visual variety is enough to keep interest, though, as the environments are purely functional and do the right thing in not pulling attention away from the combat.

The brawling mechanics aren’t as complex as some games – Code of Princess on the 3DS, for instance, is a more in-depth game – but Senran Kagura Burst’s strength is its sheer pace and energy. It’s exciting and flashy, and thoroughly entertaining. I haven’t enjoyed a brawler this much in a very long time; if only certain writers had given the game a go before dismissing it for something it isn’t.