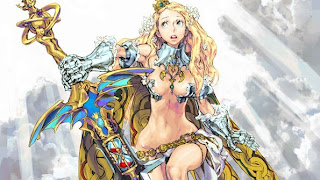 Let’s talk about why Code of Princess exists for a moment. Here is a game that is close to a first for the Nintendo 3DS; a full-priced retail game that was sold exclusively over the eShop in some parts of the world. Why not release it at retail? That’s easy, dear reader. This here is a game that doesn’t really deserve to be a retail game.

Half-baked voice acting aside (and in fairness the small download games on the eShop that this is competing with don’t typically go to that length), this game features nothing that resembles a retail-priced game. For a start, the presentation is cheap and relies on silly character cliches and a lead girl that is literally wearing less material coverage than what is found in underwear to sell copies to teenagers that think they’re being edgy by buying a game for the boobs. Working past the cut scenes and getting into the game itself produces some reasonably cleanly animated sprites, but they are so simple they still don’t look like the belong on the DS, let alone the 3DS. 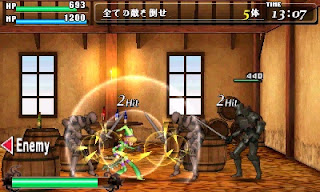 Don’t get me wrong, I am a fan of the simple-but-elegant approach to a game’s graphics, but it’s a fine line. Simple-but-elegant doesn’t need to look amateur, and unfortunately for Code of Princess it looks amateur. There’s a couple of moments when this art style is used for comic effect nicely and in all fairness the game doesn’t take itself too seriously – it even takes the time to point out how ridiculous the costume of the princess is – but those moments of humour are too far apart to really feel that it was a deliberate design decision. I’m simply inclined to believe that Code of Princess looks the way it does because of budget and/ or talent limitations.

The gameplay itself is mildly addictive at first, but tedium doesn’t take long to set in. It’s a button masher in which players will spend most of their time walking from one side of a short level to another. Most of the time it’s left-to-right, but sometimes for variety the game will make players go the other way, such is this game’s standards of innovation that that is about the most varied the game gets. With each short journey comes a range of enemies to beat up. Beating them all down will either spawn some more, bring out a boss battle, or finish the level. Then it’s on to the next short mission – rinse and repeat. 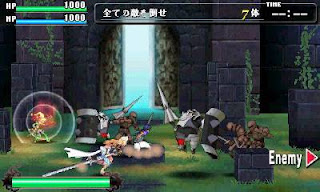 Like a good beat-em-up there’s a reasonable combo system to work with and it is nice to see so many characters available, each with their own fighting style. The main story involves a party of four, but once a level is completed players can go back to it with a wide range of other characters unlocked as the story progresses.

This opens up the grinding part of the game. Each character earns RPG-like levels and experience, and they all start at level 1. The only way to make sure that you’re able to complete the harder levels with any of them is to fight through all the missions with each character. If there was more to the missions than button-bashing combos this wouldn’t be a bad thing, but in the case of Code of Princess its tedious and a clear attempt to justify the game’s price point by making people play a lot, even if there isn’t actually that much content in the game. 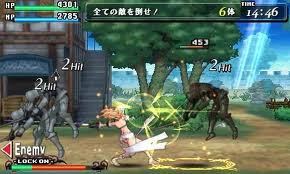 The real strength of the game is in the multiplayer; after all it is always more fun to beat stuff up in teams. There’s even a competitive multiplayer mode for people who don’t have real fighting games on their 3DS. The problem is that the 3DS isn’t exactly the best console for getting online multiplayer games going, with limited in-game invite options. Unsurprisingly the community for thie game is very quiet and I was only able to luck into a couple of games when I tried random matchmaking. For what it’s worth that bit works well but… man is it a risk if you buy this game hoping to enjoy it for a long time with the multiplayer.

There are games on the eShop that offer better value for money than Code of Princess for a fraction of the price. That’s about the best way I can summarise this game’s value; you’re better off buying the three Guild 01 titles from Level-5 (Aero Porter, Crimson Shroud, Liberation Maiden) and have change left over if you’re really that keen on buying a retail game that is only available via download here in the west.