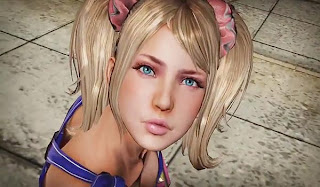 Now that Lollipop Chainsaw has been available for a while, there’s been a lot written about the game. One of the more regular comments I see made about the game is that it is “sexist.” This confuses me greatly because my reading of Lollipop Chainsaw is the exact opposite – this game is one giant criticism of the sexual politics found in games.

Of course, it terms of the marketing is was exploitative right down the line to appeal the adolescent boys – Warner Bros needed a return on investment after all, and cheerleaders and upskirts are an easy sell. But forget the marketing for a second, and look at the game itself – Lollipop Chainsaw, from start to finish, is not only turning the expectation that Juliet would be an airheaded piece of eye candy on the head; it’s actually laughing at the very audience it was marketed to.

Starting with the character herself; on the surface Juliet is indeed something straight from a 70s or 80s cheerleader film, but that’s merely a ruse; with surprising subtlety the game’s writer, James Gunn, reveals an intelligent, articulate and empowered character in Juliet Sterling. So for instance; early on in the game (early enough that any critic who actually played it before reviewing it should have noticed), Juliet asks Nick – the body-less head that she carries around with her – if he knows Japanese. He does not, but she does. There are plenty more examples of this interplay throughout the game where Juliet demonstrates a greater intelligence than Nick, and, of course, at a very basic level she is the one that understands how to combat the zombie threat.

Physically, Juliet is also greatly superior to the men around her. Nick is bodyless and incapable of even the most basic actions without being led by Juliet. Though his head can be placed on a zombie’s body to grant him temporary mobility, he can only move at the direction (and condescending encouragement) of Juliet. Over the course of Juliet’s quest she is also responsible for rescuing classmates from zombies – both male and female – which presents her, physically, as the most superior being.

Similarly her sisters – not brothers – are also zombie-slayers, and really the only men in this game with genuine power are the zombie bosses. All of which are challenging, but not through physical means. Those bosses are great at using the environment to rain death on Juliet, but in a one-on-one fight, Juliet has the advantage.

Beyond the character of Juliet herself, the developer, Grasshopper Manufacture, takes every opportunity to laugh at – not with – any player that bought the game expecting an excess of T & A.

Take for instance the trophy system. There is a trophy for panning the camera down and looking up Juliet’s skirt. It’s the first trophy a player can pick up really, since it’s obtainable the moment the game starts. And yet, on a gaming forum I saw a comment from one player that it is one of the few trophies they haven’t earned. Why? Because it’s embarrassing. That’s precisely what Suda wanted to achieve – earning that trophy is not a reward. It’s mockery, since the player’s entire social network (and possibly their Facebook friends too, since the PSN can link in to Facebook to upload trophy data) will find out that they’re perverted enough to look up a digital skirt.

But perhaps the most telling bit of evidence here is a comparison between two very similar-themed games (on the surface). Lollipop Chainsaw features an empowered, witty female lead character. Onechanbara Bikini Zombie Slayers, a PS2 and Wii game, is the reality of what critics claim Lollipop Chainsaw is. Onechanbara is genuine sexploitation. There’s no context or characterisation – it’s literally girls in bikinis killing zombies. Anyone who can’t see the difference between the two games just is not looking closely enough. Context is everything.

So, none of what I’ve described above is that unusual for the kind of self-aware postmodernism that the game is explicitly designed around. Yet, because the marketing of the game was shameless, many critics seem to have missed this point: Lollipop Chainsaw is an expression of sheer frustration at the juvenile expectations of the games industry. It’s the most intelligent deconstruction I’ve seen of gender politics in the mass media – including films and literature – in years.

And for that, Juliet may just be the most important (albeit misunderstood) female video game character ever designed.

The PSN update is Expendable