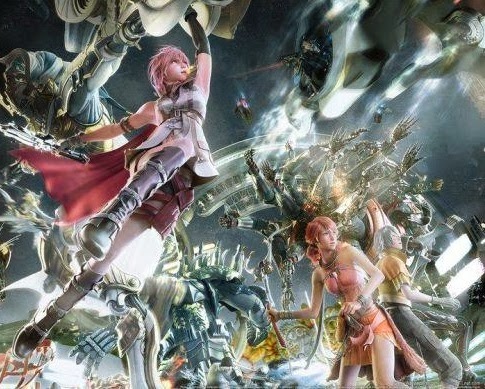 There was so much that could have ruined Lightning Returns, but as far as I’m concerned Square Enix absolutely nailed everything that it set out to achieve.

Let’s say for the sake of argument that the majority of the concerns with the game, based on previews and the information that Square Enix announced in the lead up to the game’s release, could be summed up in two major categories. The first concern was the costume system, which early on seemed like little more than an excuse to increase Lightning’s bust size and then find creative ways to show her body off (fan service, in other words). Many felt that this new system would not add much to the gameplay, especially since it meant that players would only control the one character, Lightning, rather than a party of heroes as they had previously.

The fact that the game has a strict (real time) time limit was the other major concern. If there’s one thing that doesn’t gel well with the RPG genre, it’s the idea of hurrying players through the experience, and yet here was Square Enix promising us that in Lightning Returns we would be dealing with an ominous and seemingly restrictive few days to get through to the end. 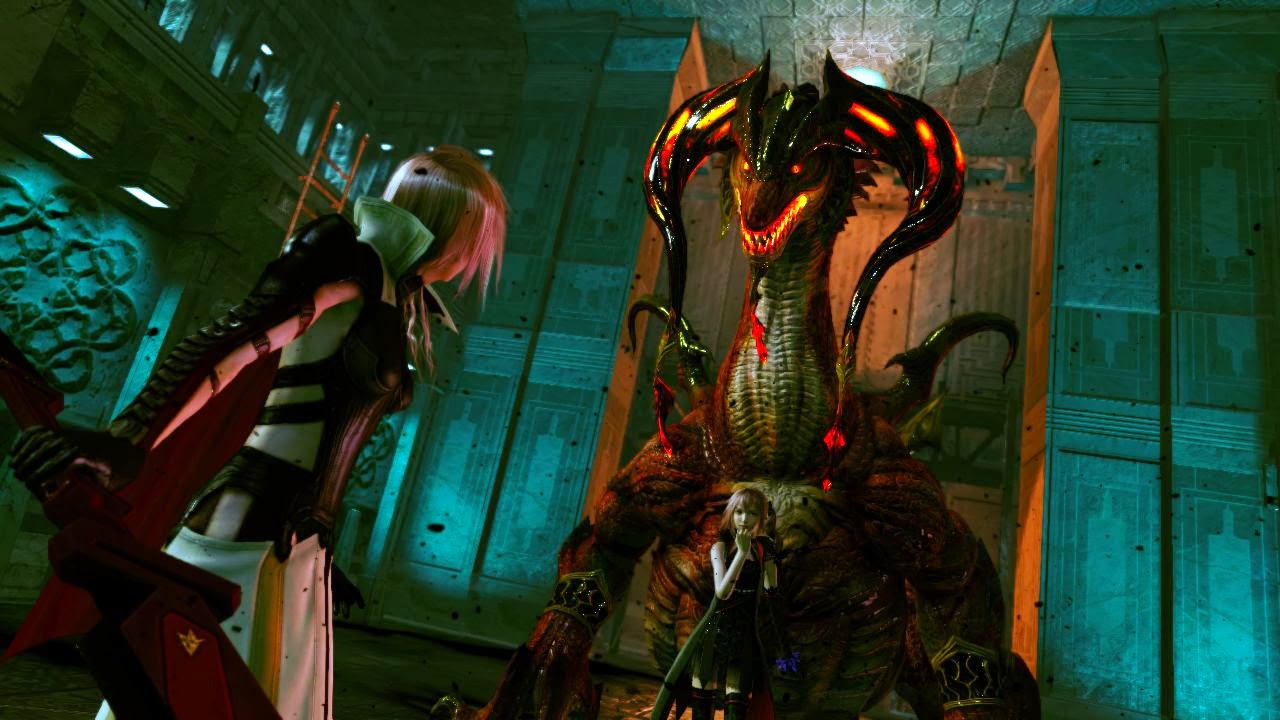 Immediately after starting I realised that in terms of tone this would be a bittersweet send off for a bittersweet series. The developers wanted to make it clear that there would be no more to this game’s world, and that finality to the game’s events was the source of some sadness. Perhaps after investing so much creative energy in a franchise that divided their own fan base, the artists themselves feared to close the book on Lightning and her story without ever hitting commercial gold. Early on we’re presented with a tree (Yggdrasil), that represents the progression towards the end of the Final Fantasy XIII world… and the game series itself. There’s a serenity to viewing this tree, but by the same token the song playing in the background is almost one of mourning. So yes, I do think that the creative team behind Lightning Returns were saddened by the idea that their proverbial baby was nearing its end.

Dealing with a time limit 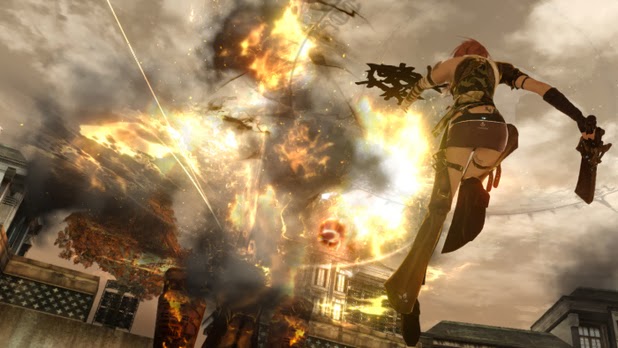 The time limit makes sense in this context, as it’s a constant reminder that our time with this world and its characters is drawing to a close. The world is decaying and dying, quicker than it should be, and unless Lightning can feed Yggdrasil with enough positive energy from souls and prolong the inevitable annihilation for a couple more days then everything that she (and by extension the players) have worked for over the previous two games would be for naught. 150 hours, if not more, of gameplay will mean nothing because ultimately the world would be destroyed and everything Lightning, her sister, and their allies fought for would have been pointless work. There would be no happy ending. This nihilistic theme that hangs over this game like a Sword of Damocles can be at times distressing, and so as tickticktick goes the clock, the anxiety starts to set in; are you, the player, going to be able to achieve what you need to in time?

If you can achieve the objectives laid out to you at the start then there is the promise that a new world will be created and the characters and souls of the destroyed world would find a new home, so it’s not a completely bleak picture, but it nevertheless raises a range of difficult questions of its players on the nature of time as the narrative progresses.

This is not an uncommon theme in Japanese art. From manga to film and literature, Japanese artists have long had a fascination with the idea of time. And more than that, Japanese artists like to ask the question: “if you know that time is limited, how do you respond? What do you do and how do you feel?” Lightning Returns is yet another manifestation of that theme, and I do believe that just as with the previous two games there’s actually a lot of thematic merit to the way that the developers have approached the narrative design. I do think it’s something that has been unfairly overlooked in critical discussions around the game. 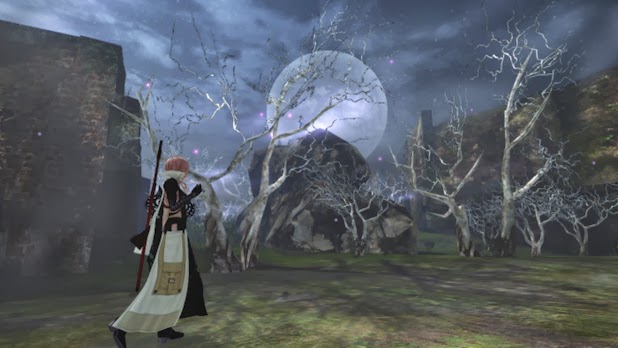 A narrative as intense as Lightning Returns is a remarkable risk for Square Enix to take with its flagship franchise. Creative risk is a common trait with the Final Fantasy XIII games, but Lightning Returns kicks this risk taking up to an entirely different level. This is a game that isn’t going to connect with everyone because the central nihilist theme is a ridiculously complex form of philosophy, and in fairness the developers clearly struggled with the the technical construction of their story at times. Just as happened with the other two Final Fantasy XIII games, in the second half of the game the game’s writers struggle mightily to resolve the narrative strands that they’ve created. This creates some very odd and fantastic moments of story complete with awkward delivery, and while it does provide a useful answer to the nihilistic philosophical puzzle in the end of Lightning Returns, the narrative does try to be a little too smart for its own good. Consequently, it is more difficult for a player to relate to it on the kind of emotional level than I imagine the folks at Square Enix had intended.

That aside, given due attention and focus, Lightning Returns offers a compelling narrative. It’s also a narrative that provides a neat explanation for why Square Enix opted to give players control over a single character rather than a party of heroes. The themes demand that Lightning experience a solitary, lonely quest for what ultimately amounts to absolution and redemption, as it is a desperate quest and desperation has a greater impact when it’s tackled alone. And though at points she has the assistance of others that seek to defy their own fates (and provide a convenient excuse to bring all the XIII characters back for one more round), for the most part Lightning is on her own, and very much up against the odds. The loneliness of Lightning’s quest is palpable, and in that context it makes sense to have the consume system replace the traditional party. 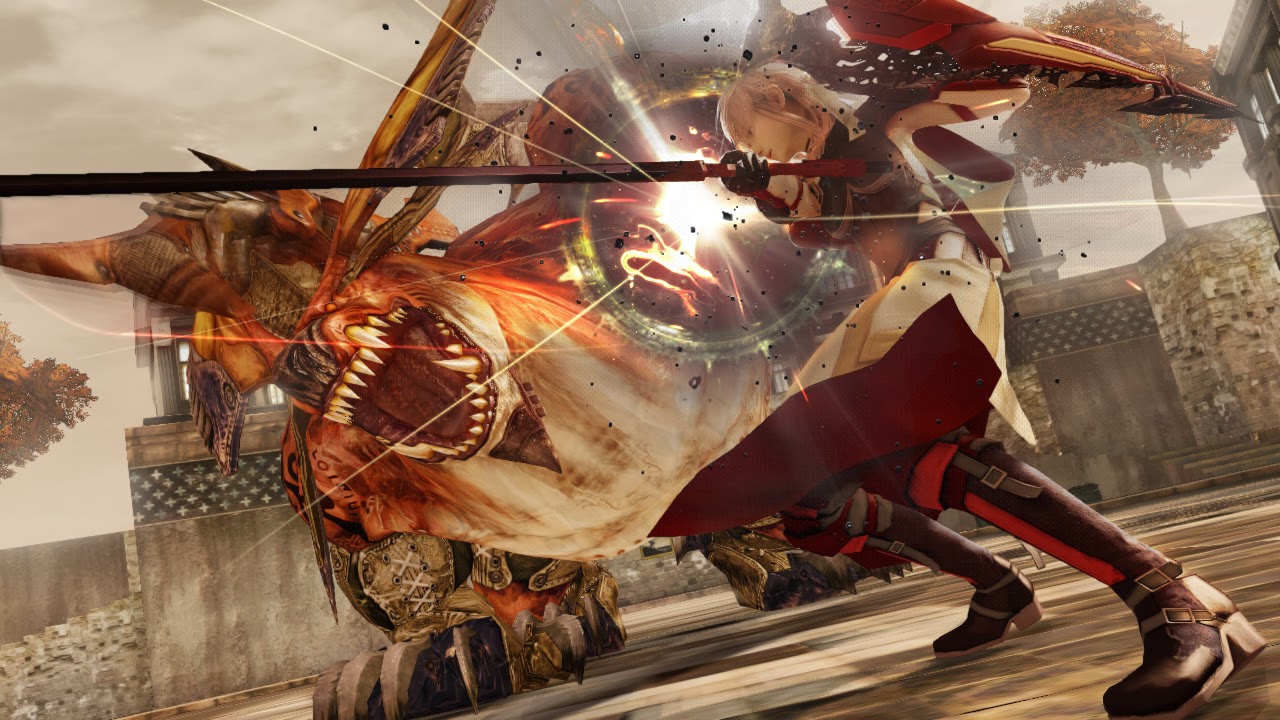 Lightning’s costumes give her a range of different roles to adopt when in combat. She can take three costumes into battle at one time – one might focus on melee, the other might focus on healing, and the third might be for aggressive magics. Switching between these is fluid and dynamic, and lend a very fast pace to the battles, with players switching back and forth between costumes very quickly to either defend against an enemy assault or counter punch. At first it feels a little mindless, but as the difficulty of encounters scales upwards the combat develops an elegant rhythm, and almost starts to feel like a dance. Yes, the costumes are unnecessarily sexualised at times, and this actually hurts Square Enix’s case by turning a dirge of a narrative into a weird mesh between downbeat apocalypse tale and otaku fan service. If there is any criticism I have with Square Enix for this game it’s this obsession with sexy costumes which completely breaks with the tone of the narrative. But mechanically, the combat itself is elegant and engaging.

The game is also more open than any previous Final Fantasy game. While the narrative goal remains the same regardless of what the player does, the environments themselves are filled with side quests and opportunities to distract them away from the main quest. These quests aren’t always the most engaging (though they do try to be more than the “collect ten leather hides” structure… sometimes), but they are the primary avenue for increasing wealth and skills, and it’s worth doing as many of them as possible. Of course, with the clock going tickticktick the temptation to overlook the especially difficult quests can be overwhelming; but then these quests are often essential in order to meet the minimal game objectives, so players will need to steel themselves for take some risks of their own at times. 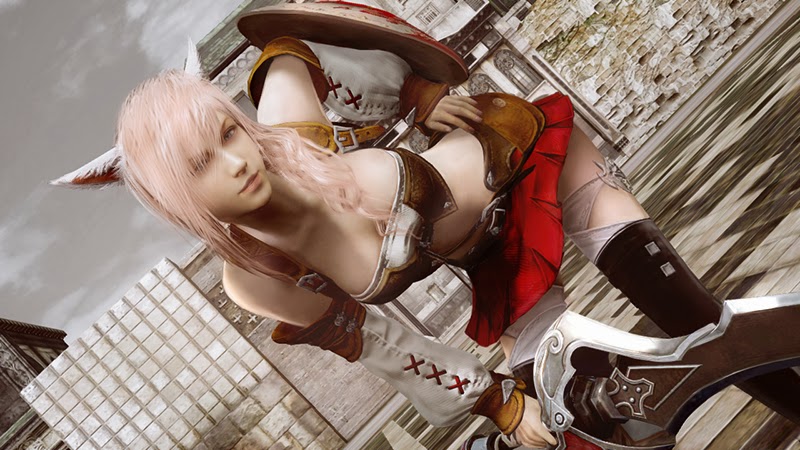 Of course it would be impossible to discuss a modern Final Fantasy game without mentioning its production values. Lightning Returns is truly gorgeous. Despite being a PS3 game, aesthetically it’s as complex as most of what the next-gen consoles offer at this stage, with epic landscapes and fluid, dynamic combat sequences lending the game the blockbuster appeal that people expect from this franchise. I kept reaching to my “share” button while playing, only to remember that I wasn’t actually playing this on the PlayStation 4. The soundtrack is a lovely mix of classic Final Fantasy XIII tunes and some new tracks, typically used to help build the ambience of a dying world. This is one of the rare franchises where I go out of my way to import the CD soundtracks from Japan, and Masashi Hamauzu’s work rounds out the presentation beautifully.

While Lightning Returns continues the Final Fantasy XIII series with its customary motif of the battle against fate and inevitability, the process of getting through the game is surprisingly downbeat and at times confronting. It’s a pity that a lot of players have been so fixated on the perceived gameplay weaknesses of each of the games in this trilogy, because in doing so they’ve really missed the broader philosophical richness of the story of Lightning and her ragtag crew of allies and antagonists. Ironically, those people will also find Lightning Returns: Final Fantasy XIII the weakest game in the series, when thematically speaking, it’s actually the most powerful.

Fancy a quality CCG? Infinity Wars is live on Steam