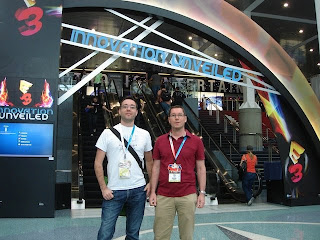 I’ve known Watt for quite some time now; as we’re both based in Sydney he’s been a regular go-to guy for news and industry insights (and it helps that he and his team at Nnooo work in a seriously awesome office).

Those notebooks, diaries, and postcard apps helped fund the next stage of Nnooo’s development as a business, and it stepped up and into higher profile game development. Spirit Hunters was an under appreciated augmented reality game, and escapeVektor is the team’s finest work to date, being a brilliant mix of retro and modern aesthetics and play styles.

Now the team’s working on its most ambitious title to date; a PlayStation 4 HD shooting gallery called Blast ‘Em Bunnies.

In The Interactive Canvas we’re going to be talking to Watt about his approach to game design, which is very much a case of keeping things simple and elegant, and exploring a single idea in depth in each of his games. From my previous conversations with Watt, he thinks very deeply about user experiences and how interactivity works in games, so this interview will be a truly fascinating insight into the way that developers think about the games we love to play.

If you’re keen to read this interview and dozens others, be sure to reserve your copy of the book now!

Confirmed: Monster Monpiece is being localised, but it’s also being censored