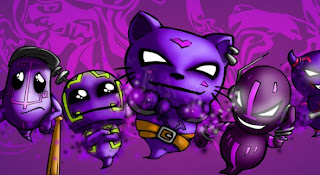 Typically with the games industry the finest games hit a platform at the very end of its lifespan. As developers are more comfortable with the platform’s strengths and limitations they’re able to optimise it to the finest degree to create the deepest and most rewarding experiences available on the platform.

DSiWare is a platform at the end of its lifespan. Spirit Hunters, as a game released at the end of the platform’s lifespan, is perhaps not the deepest game, but it’s certainly one of the most rewarding, and it’s a massive achievement for a team of five developers; it utterly annihilates the very similar Pokemon Dream Radar at its own game.

Like Pokemon Dream Radar, Spirit Hunters turns your real environment into the game’s background through the DSi or 3DS’ camera. The idea is that you’re hunting down ghosts through this lens (Project Zero for kids, perhaps?). Of course it’s also possible to play the game stationary and in complete darkness – the ghosts don’t interact with the environment in any meaningful way, but it amused me when my rabbit bounced right past a spirit in the possess of blasting me with a wall of fire. 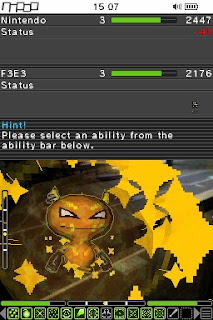 Just like with Pokemon there are a couple of different types of ghosts (fire, water, ice etc) and each has strengths and weaknesses against certain kinds of attacks. Attacks work a little like most modern MMOs. Across the bottom of the screen is a bar where you can load up your preferred attack set. In battle you’ll select an ability from this bar, and then either tap, tap & hold, or swipe the touch screen to launch it at the ghost. Because the spirits are agile (very agile at higher levels), picking the right attack set, and then learning attack patterns to maximise damage is the core focus of the game.

It must be said that the difficulty curve is very, very gentile, and that levelling up at times becomes a real grind. When there’s nothing really to this game beyond the battles with the spirits, having to down five (or more) to level up, and only really accessing new stuff every ten levels can become a fatiguing process. That said, because battles are so quick (never longer than two minutes), there is a steady sense of progression that is addictive, a little like how games like FarmVille are addictive because there’s a steady stream of new stuff popping up on the screen.

As mentioned, there’s nothing to do in this game besides battling. There’s an achievements system that developers, Nnooo, have managed to implement, which will make an OCD person’s eye twitch. There’s also over 250 different spirits to track down and battle. Which spirits pop up depends greatly on the dominant colours that the DSi/ 3DS’ camera detects in your environment, so there’s some encouragement there to get out and play the game in different settings. 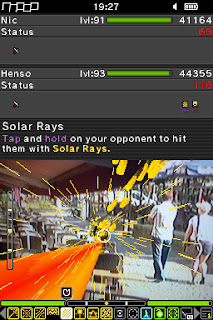 After beating a spirit it’s possible to send it to a friend to battle as well. There are two versions of Spirit Hunters – light and dark, and just like in Pokemon it’s impossible to find all the spirits in one version – you’ll want to find a friend with a different version of the game. Unfortunately, sending the spirits to friends to battle is a labourous process, and it’s here more than anywhere else that you’re reminded that Spirit Hunters is the work of an indie development team. To send a spirit, you’ll need to input the exact name that your friend uses in their version of the game. Then the game will generate a code that you’ll need to send to them. It’s quite a lengthy code, and if your friend does not enter it exactly, the process won’t work. There are no fewer than three steps in which a tiny mistake can cause an error to happen, so it’s unfortunate that Nnooo did not have a couple of extra people on board to work out some WiFi trading.

That gripe aside, there’s plenty of personality in the spirits that you’ll be battling and collecting. There’s a wide range of attacks and items to buy, and end-game loadouts feature much the same complexity as a full-fledged RPG. Collecting everything and hitting maximum level is going to take a few dozen hours.

And most importantly, this is an addictive game that is perfect for short bursts of play. There’s not a whole lot to it, perhaps, but the one system the game does use, it uses well, and the actual battling is infinitely more nuanced than Spirit Hunter’s immediate peers.

I hope for Nnooo’s sake that this game is a success, because after 2 ½ years in development, Spirit Hunters also plays like a very genuine game. It’s clearly a passion project, and fingers crossed there’s still enough interest in DSiWare to make the time, money and effort investment worthwhile.

If not, port this game to iPhone, Nnooo. It’s perfect for it.