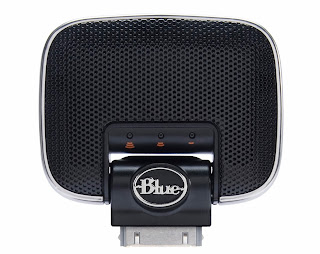 Why do you need an external microphone for your iThing? Well, if you’re an average user, you probably don’t. But if you’re a journalist, researcher, musician, student or podcaster, the Mikey Digital might just be the gadget for you.

The Mikey works with the iPhone 4 and 4s, previous-generation iPads and newer devices via Apple’s Lightning adapter. As befits a product made by a specialist microphone manufacturer, the unit is physically excellent. A lightweight metal housing contains two premium condenser capsules and an integrated pre-amplifier, and it’s capable of swivelling through 230° to point in the direction of a sound source. Other features include automatic or manual gain control, a micro-USB port for powering your device during long recordings, a soft carrying case, a 3.5mm line-in port and a guitar adapter.

This hardware produces results which are very different to Apple’s internal microphone. In side-by-side tests, it quickly became apparent that stock iDevices do a great job of capturing the vocal range, producing a sound which is powerful but mildly tinny. In comparison, the Mikey records a much wider range of sound, and it’s particularly good at capturing deeper, resonant tones. There are downsides to this; it’s bassier than I’d like, and voices sound natural but less powerful when recorded on a Mikey. Overall, though, there’s little doubt that the microphone produces cleaner, more dynamic results than anything an iDevice can do on its own. 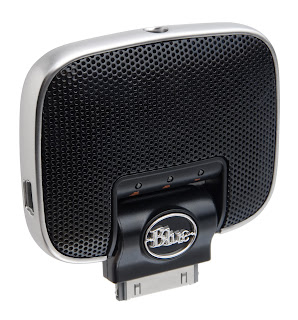 Another pleasing aspect of the microphone’s performance is its abhorrence of distortion. Analysis of recordings made using the auto-gain setting showed that the level was dynamically adjusted to lie just below the point of overload. Occasionally, some minor disruption occurred while moving the host device; however, in these cases, the Mikey flashed warning LEDs to show that something was amiss. Blue Microphones recommend that manual gain settings are used for sources between 45-65dB and 100-130dB. These settings worked well in our tests, though we found that the ‘quiet’ position introduced some hiss and was easily overloaded; nevertheless, it added detail and volume to otherwise inaudible recordings.

The Mikey won’t work with Facetime or during calls but, as it’s a plug-and-play device, it’s compatible with most popular recording applications. For best results, you’re best abandoning Apple’s Voice Memo in favour of a stereo, CD-quality application. We obtained excellent results with the free versions of Music Studio, iTalk and Voice Record Pro, although Jammit was prone to feedback and needed adjustment to prevent a squeal. Similarly, outdoor recordings produced occasional bouts of electronic burbling. This wasn’t present in static recordings, so I speculate that it might have been due to small movements of the microphone as I walked. Other tests showed that the Mikey provides good omni-directional coverage, and that stereo recording (unsurprisingly) provides a sense of position but lacks the clear separation that would come from the use of widely-spaced microphones.

In the end, this is a device to use when portable recording really matters. That electronic burble has cost it a half a star, but it’s otherwise ideal for situations where the source is loud, quiet, or richly toned. I’d be tempted to stick with Apple’s powerful internal microphone for day-to-day or non-static work, but it’s definitely worth having a Mikey Digital to hand for extra quality and bass should you need it.