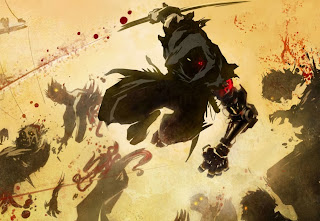 A couple of months ago I had the opportunity to play an early build of Tecmo Koei and Comcept’s collaboration project, Yaiba: Ninja Gaiden Z. I was more than a little impressed by that early build, as Keiji Inafune’s new zombie slasher seemed to be channeling the Goichi Suda philosophy towards game design, and I’m always up for more of that kind of action. With this new build I got a chance to delve deeper into the first couple of levels of the game, and I’m impressed to see where the game is going.

The first preview offered a simple highlights package, and as such there was always the danger that as wildly oddball that experience was that it would be like the trailer of a bad comedy film; all the good stuff is in that two minutes and the rest of the experience would prove to be quite pedestrian. 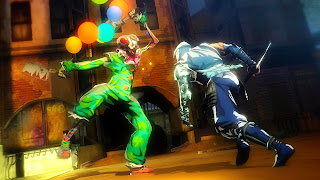 But after playing the full levels, I’m happy to report that the ideas come thick and fast and there’s never a moment when the ideas start to run thin. Early on I encountered zombie clowns (truly terrifying). Then comes the standard toughs, then comes the fire-breathing monstrosities, and then comes the zombie bride that’s rather pissed off that you’ve ruined her wedding.

As mentioned, Inafune seems to have been influenced by Goichi Suda’s games (such as Killer is Dead). The way each new enemy, situation and environment is introduced is quite surreal and never quite fills the players in with what’s going on, and thematically the sheer excess in energy that the game throws at players is very much in the vein of Suda’s barely-controlled energy. Then, just as it starts to make sense, the game throws in another curve ball. Inafune, as with with Suda, seems to delight in being deliberately confusing and throwing expectations out of the window, and as a consequence of that the overall experience is well over the top and consistently surprising. This kind of game doesn’t work if the narrative is too lengthy, as the moment it starts to drag it also lacks impact, so it’s my honest hope that Yaiba is a game that runs from 5-6 hours at most, and based on the number of levels and how long it took me to work through the early missions, 5-6 hours sounds about right.

It’s an overload of the senses too, from the heavy, active music soundtrack to the copious levels of gore, occasional moments of fetishisation, and sheer speed with which everything moves. For the most part individual enemies are not challenging in the slightest, but they certainly bleed a lot and players can tear limbs off to then use as weapons, so they fulfill a thematic purpose if not a gameplay one. But that’s not to say the game is easy; there are moments of true challenge that are based on having combinations of enemies that are difficult to manage together. So for instance a horde of individual zombies can be mowed down with ease by our agile ninja, and the helicopter enemy is also easy to defeat – simply time a swing of the sword to reflect the missile back at the helicopter. But together? Well, the slow, lumbering zombies are not the real threat, so you can’t concentrate on them, but then when they get close enough, their clumsy swings are just enough to ruin your rhythm in trying to time the reflect attack to take down the helicopter. 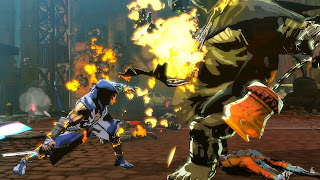 This is something that Inafune has built in to this game that Suda games often lack; a finesse with regards to the enemy encounters that often lets down a game that is otherwise a stomping ground of creativity. With a Suda game the only interesting combat is usually the boss battles, that are typically multi-tiered experiences with a lot of variety to them. The bits between the boss battles are simple, repetitive, brawling button mashers. On the other hand for Yaiba the more interesting design in the regular battles makes them the more interesting to experience, and the game sacrifices none of the weirdness in the process. It’s Suda turned up to 11, in other words.

Time will tell if the game is able to maintain that chaotic momentum from start to finish over the course of the full game, but the early signs are there that Yaiba won’t necessarily be a critical darling or a commercial success (it’s simply too weird), but for those very same people that continue to enjoy the work of Goichi Suda, this one will fit right in with their tastes.