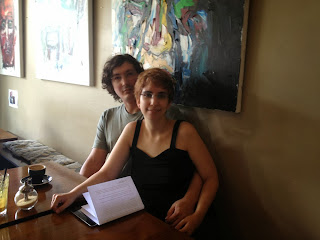 Newtown, Sydney; there couldn’t be a more appropriate place to talk about an art game and a broader games industry that has just recently opened up in a meaningful fashion to innovative game developers.

Newtown is in many ways the centre of alternative arts and cultures within Sydney. It’s a suburb filled with creatively-minded people, youthful innovators and entrepreneurs. Lining the suburb’s main street are an endless stream of cafes and restaurants that harmoniously embrace every race, religion, and economic status.

So when I sat down with Tamara Schembri and Peter Budziszewski to discuss their new venture, ToyBox Labs, which is about to release its first game (an art game called Flowmo), it felt appropriate that we decided to meet at a Newtown café near where ToyBox Labs has set up shop; this is very much the home for what the team is looking to achieve.

Budziszewski is an experienced Australian game developer, having been part of the industry since the 90’s. After spending time at a very early-era Tantalus (from way back before industry veteran Tom Crago joined and took over), he joined Team Bondi to work on Australia’s biggest release in many years (and sadly one of the most controversial); the Rockstar-published L.A Noire. There he was the lead engine programmer before taking a sabbatical from Australia’s games industry to spend time at the US with Harmonix.

After returning to Australia he continued to work as a contractor for Harmonix, but as that contract finished up he saw the opportunity to start up a small indie outfit with Schembri and work on a more personal project.

“It’s nice to be able to work quickly and do things without having to work through the processes of a big company,” Budziszewski said. “Big companies have a lot of assets and the knowledge of how everything works is spread out through the company, so to get some basic information you need to go and meet some people and navigate a complex structure. What I really like about doing our own thing is that we can move so quickly. We can make a decision and try it out and if it doesn’t work we can quickly go back and try something different.”

ToyBox Labs built its first game in a very fast time indeed; it took just five weeks to take bits of code and ideas that Budziszewski and Schembri had built up in their spare time over the years, and turn it into the completed Flowmo. We’ve got a review of the game coming shortly at Digitally Downloaded, but it’s truly a fascinating abstract experience that fits firmly within the “non-game” genre of interactive art that includes the likes of Proteus, Dear Esther and Gone Home.

Fundamental to the experience is the way that the music holds much of the game’s narrative, Schembri said. It’s through the interaction of music and player input that Flowmo develops the powerful emotional journey that forms the core experience. And yet the idea for the game from a very simple place. “We weren’t exactly planning to make Flowmo from the beginning,” Schembri said. “We were originally planning to make a plain particle manipulation app, but then we added music in and it grew from there.”

“Our game design goal was to provide a series of ‘aha!’ moments, and players would get a sense of wonder and surprise each time they discovered something new. The events in the game are crucial to this – they keep things moving along, and keep the player wondering what’s going to happen next. The element of surprise is crucial: the sequence of events in the game are really quite unlike anything you see in traditional games, so on the first playthrough there’s a sense that anything could happen.”

In many ways, the design decisions that went into the making of Flowmo, like with most art games, flies in the face of traditional game design wisdom. There’s no hand holding in this game, no straight corridors to follow, no tutorials, and nothing makes sense unless you as the player sits down to puzzle it out.

This is all entirely intentional and a reaction to what is happening in mainstream development, Schembri said. “Traditional game design assumes that the reason you’re playing is goal-driven: to complete the tasks set out for you by the designer. For someone who plays for immersion, this design will often drag you back out to the real world: you can’t complete a task, so you can’t progress, or you’ve got to keep repeating the same tasks over again, and so on.”

“This kind of thing is lots of fun, but it shouldn’t be the only kind of experience that games offer. Art games are all about offering an alternative, where you can lose yourself in the game universe and experience ‘flow’, without any fear of having the experience disrupted in any way. Part of the challenge in doing this effectively is keeping the player engaged – ultimately, traditional game design exists because players get bored if they don’t know what to do. In Flowmo, the key to this was having engaging, but constantly changing and unpredictable interactions, so that people are encouraged to explore and try things out.” 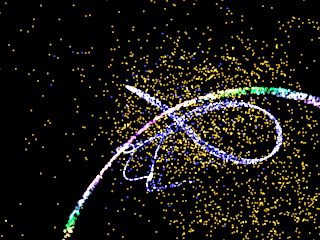 The problem that Budziszewski and Schembri have encountered as Flowmo was finished up and the release date neared was in getting the word out of the game. When you’ve made something that you want to mystify players and instill in them a sense of wonder, you also don’t want to give too much of the game away. When a marketing and PR strategy can’t rely on extensive videos and screenshots, it becomes difficult to convince players to look twice at the game.

“If you’ve produced that kind of game really your best hope is organic word of mouth. The people who try it loved it, and we’re hoping they tell their friends about it,” Schembri said.

“We were going to do something nice and conservative, and once we started to make it all the sensible considerations about how we’re going to make it and how we’re going to market it went out of the window,” Budziszewski laughed. It’s a very Newtown approach to doing anything really, but it also represents the kind of gameplay experiences that Budziszewski and Schembri want to build; they’ll never be able to approach a traditional publisher to invest in their ideas, but the opening range of platforms for self publishing means that may well never need to, and that would suit Budziszewski just fine.

“One of the things I’ve always wanted to pursue is to take traditional game mechanics, and incorporate them into apps that are toys. They don’t necessarily have an objective to them, they’re just fun to play,” Budziszewski said. “I got a feel for this when I was working at Tantalus, and I worked there in the late 90s. In-house we were working on a little car game, and it was simple, and focused on really fun, simple, mechanics. Everyone would get on the LAN and smash into one another and have a good time.”

“They demoed it around and it got picked up by Acclaim and turned into South Park Rally (a game that performed spectacularly badly with the critics). They added all these ridiculous and complicated game mechanics and took out all the simple fun. With a big publisher you always have to produce and justify a certain number of gameplay hours, build in a story arc and so on, whereas I want to go back to those simple game mechanics and turn them into toys.”

While it might be difficult to market Flowmo, Budziszewski and Schembri do enjoy a certain advantage in releasing a game at a time where the art game genre is becoming increasingly legitimised by the market. Just as a healthy and robust independent arthouse film industry thrives as the majority of the audience goes to see the latest Hollywood superhero film, the games industry is just starting to see the emergence of an arthouse games industry and this industry is starting to see recognition amongst the major publishers. Sony, for instance, has opened the Vita right up to arthouse developers (and has been rewarded with games like Proteus and Thomas Was Alone appearing on the platform), and has published other highly experimental works like Rain and Journey.

Budziszewski and Schembri believe that it was indeed Journey that really kick started the broader appreciation and acceptance of arthouse games amongst more traditional game players. “Journey introduced the art market to a mass of people that otherwise wouldn’t have had heard about these games,” Schembri said. “And now they’re more willing to try a game like Proteus. Now there’s an opportunity where we as a developer can make something and say ‘it’s a bit like Journey’.”

“In the early 2000s the consoles really dominated,” Budziszewski added. “The PC market was sliced so thin that even if you made a successful game you wouldn’t make much money. So the publishers were making bigger and more expensive games on fewer major consoles and as they did that they were prepared to take fewer risks. There was no outlet for them and shelf space at retail was expensive. A game as experimental as any of these art games could never be made with a triple-A budget.”

“I think for the big publishers their whole risk strategy will change in response to the success of games like Journey,” Budziszewski said. “That’s a new market that didn’t exist previously.”

DDNet’s Games of the year 2013: Australian Game Of The Year award