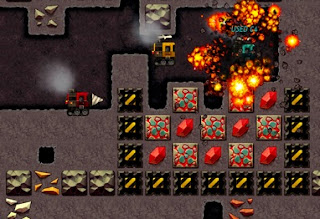 So when I first heard about Super Motherload, I was at a bit of a loss. It is not often that a new console release relies on a nearly seven year old Flash game as the basis of a launch title, but that is essentially what we have here with Super Motherload. So while the premise sounds like a horribly mismatched partnership, I am excited to say that quite the opposite is true.

Things start off simply enough. You are in charge of a vehicle that can burrow into the ground on Mars as you attempt to mine precious ores. At first glance, it looked like Dig Dug for the modern age. Just so you know? I consider that a good thing as Dig Dug was one of my favorite arcade machines as a kid. There are several things you need to monitor at any given time. You can only hold so much cargo in a given trip. You have fuel and without it you can no longer drill (on easy. On harder difficulties your game ends with your demise), forcing you back to the surface. Your machine can take damage if you fly around or drop too quickly and smack into a wall or some cluttered section of ground. 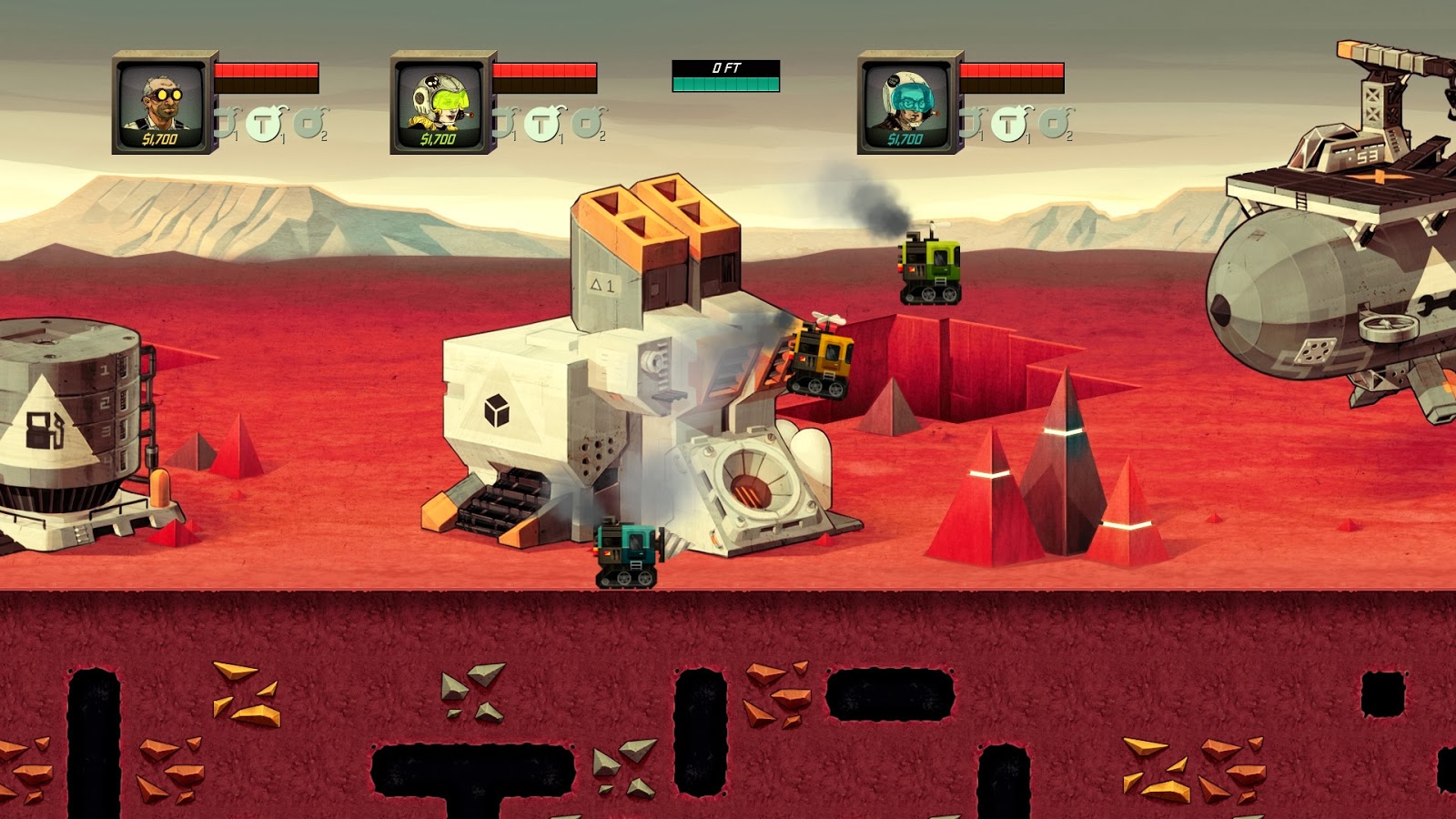 Perhaps Super Motherload’s most entertaining hook is the upgrade options. When you return to the station (initially there is one up top, but there are more further underground as well, if you dig deep enough), you will want to drop off your ore, which you get paid for. Then you can refill your case, pay for repairs and buy upgrades such as higher cargo or fuel capacity, increased hull strength or better drill components.

While things start simply enough, the further down you go, the darker the story gets and the more challenging things become. See a cache of bombs surrounded by glowing red rock? Be careful because those super-heated stones can be drilled through, but they damage you as well. See a patch of ore you cannot reach by drilling? Fire off a bomb – just make sure you do not blow up the very thing you are hoping to mine.

Super Motherload does an excellent job of layering strategy onto you in small increments, giving this somewhat short title plenty of entertainment value. However, if this was just a straight port of a Flash game, people would have little reason to try it out. Thankfully Super Motherload looks and sounds great, with an incredibly catchy soundtrack, voice overs and high definition graphics that may not tax the power of the PlayStation 4, but certainly looks a lot prettier than what you would get out of your web browser. 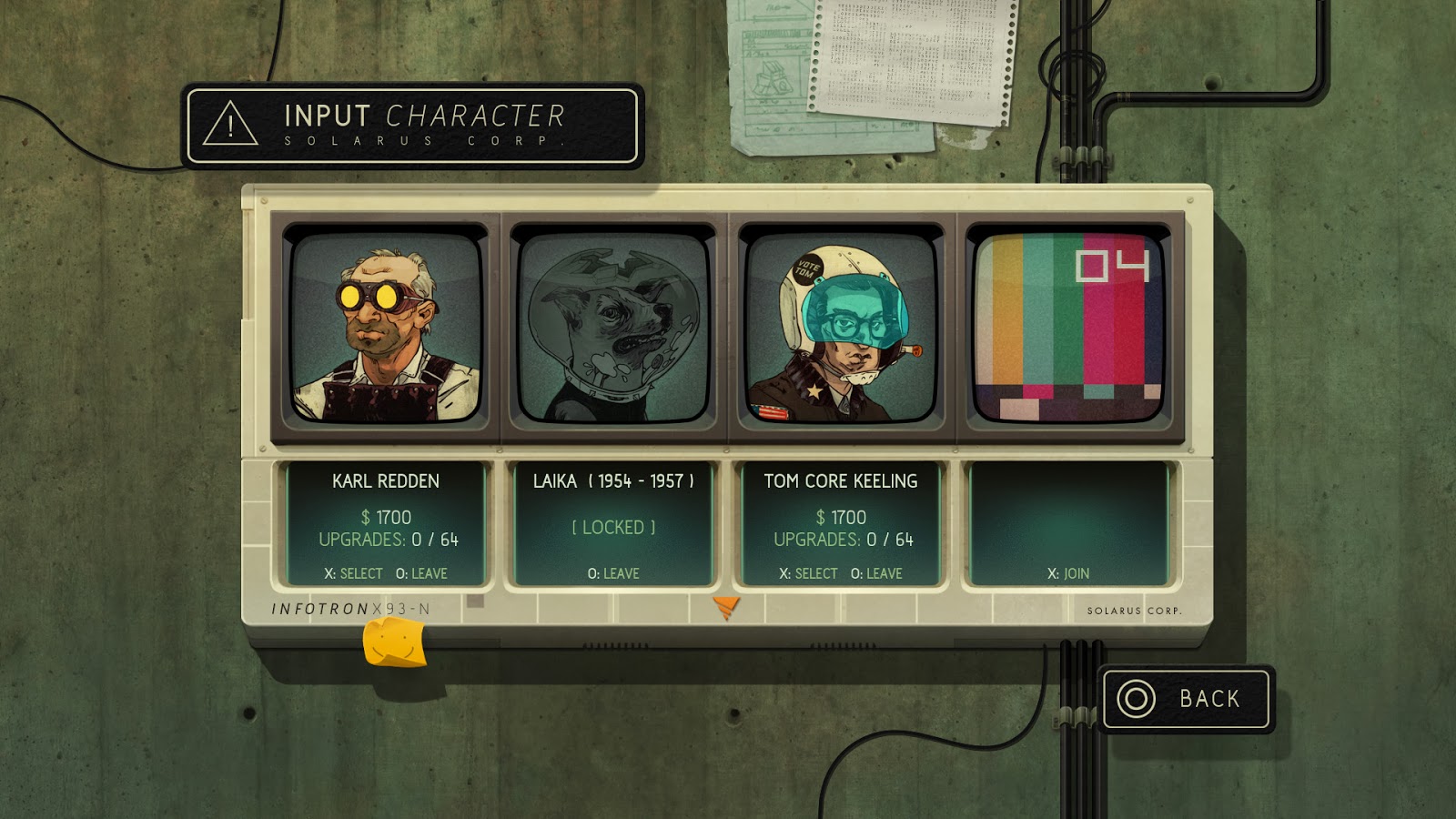 Probably the most entertaining aspect of the game for me was the multiplayer. Up to four players can hop into the fray locally (unfortunately however, there is no online multiplayer). This local multplayer is a lot of fun and speeds up the game in the process.

Super Motherload does not really feel ‘next gen’ – it is not doing anything terribly revolutionary and while the presentation is crisp, clean and enjoyable, it does not feel like it is breaking new ground. The only real notable use of the PlayStation 4’s features is in the swipe gestures you can use on the controller’s touchpad to use items. Of course, you can do the same thing by using the bumper buttons to scroll through said inventory and the press of another button to deploy said item, so it’s the very definition of a gimmick.

The drilling gameplay will probably not be for everyone, but for those who find it to their liking, there are enough quality hooks in place to make this a worthwhile early purchase for new PlayStation 4 adopters. The formula could get repetitious over time, but frequent saves allow you to take a break and come back to it whenever the mood suits you.

The mood suited me fairly often.