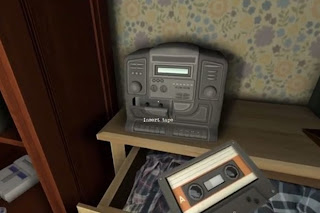 I wanted to write a brief piece to highlight Gone Home, and specifically its narrative. The way this little indie title goes about the business of creating narrative is something that every game developer should take note of, because it’s a rare example of a developer taking advantage of the unique narrative opportunities of the game form.

It’s such a ridiculously simple way of doing interactivity, but Gone Home really hammers home the fact that players are responsible for their own narrative experience. Everything about this game asks that players figure it out for themselves. That CRT TV and VHS tapes tell us the game is set at a time when people aren’t wandering around with iPhones yet. Now this little detail isn’t all that important to the grand scheme of things; it’s a simple bit of setting that helps to flesh out the game’s world and help players connect with it. But if a player missed this bit of detail, it doesn’t really matter from the broader narrative point of view. That attention to detail that makes exploring the small house a compelling narrative experience indeed.

More critically though the absence of narrative hand holding gives players an intense agency in Gone Home that isn’t possible when parcels of information are portioned out as invisible triggers are switched. When discovery is determined by player action a player’s engagement with a game is deeper and the connection with the game is greater. I’ve lost count of the number of times big AAA-games have frustrated me by either using mechanics, or NPCs to direct me to my next objective. Ni No Kuni, a game I truly love, became grating in some respects as I played it because there was a giant star on the minimap telling me where to go next. Mechanically it helps the game because it means players don’t get lost (and less patient players don’t then give up on the game). But in terms of narrative it distances the player from the experience somewhat by constantly reminding them that they’re being led through the experience.

The sense of reward in Gone Home is greater than it is in Ni No Kuni. Every discovery I made was my own work. Each mystery I pulled up made me want to go and look for answers, because I knew there wasn’t a cut scene around the corner that would tell me what I needed to do next. A happy consequence of giving players agency means that progression feels more genuine.

The whole experience in the end feels like Gone Home respects the player’s intelligence. There is an absolute minimum of content in this game that is told to the player. To go back to some of my early lessons in creative writing from those days when I was an aspiring author at school; the key to being a good writer and giving readers a good story that they can engage with is to respect their intelligence enough to show, not tell. Give them all the information they need to figure out the meaning of the narrative, but let them figure it out for themselves. Gone Home is a true rarity in the games industry because it shows, it doesn’t tell.

I wrote recently about how a game like Minecraft is an example of game narrative being done right, because it allows players to write their own story as they play. Gone Home might have a narrative for players to follow, but because their exploration of the game determines what story they experience, here is another perfect example of a game developer using the interactive medium available to them to create a story that would be impossible in any other art form.