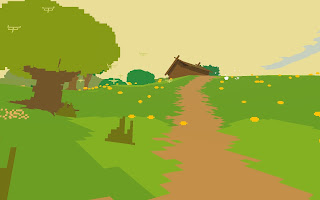 I sat in the middle of a ring of stones, on the top of an icy mountain. Roughly humanoid in shape these menhirs told no story of their own, and so I was left to sit there and puzzle over them. And so I sat, with nothing but the freezing wind to keep me company.

At length I decided to descend from my perch to explore the world beneath me. I approached a tree, and the noise started. At first it was one note, but as I made my way into a thick forest of pink leaves that one note became a cocophony, somehow jarring and at the same time serene. This soundscape was my own; I created it through my own movement, and that sensation of ownership connected me to the unique soundtrack that only I would ever hear.

There in the grass was a shape very similar to a rabbit. It wasn’t moving, it was awaiting my approach. I obliged and it bounded away, making a merry little tune as it did so. After chasing it around for a while I saw a building on the horizon, and lost interest in the bunny entirely. The building was a little wooden hut. It didn’t do anything as I approached; there was no way in and as far as I could tell there was no one home. But I was hearing a different tune while I walked around this hut and so I hung around, wrapped up in a wholly new experience and left pondering why this hut was on a deserted island as it was.


Then it rained. The sky darkened and I could feel the coolness of the water as it fell around me. It was pure serenity and it was there, amongst the patter of digital rain, that I realised the true potential of a game as a work of art.

Playing Proteus my response was not dissimilar to walking through a gallery exhibition for one of the greats. The world is broken into small chunks as a consequence of its procedurally-generated nature; so one space is a thick forest of trees, and the next will be a black fortress-like object. Each time you start a new game it’s going to be a new environment that you experience. Self contained each of these spaces is a joy to explore, creating new music with every small movement that the player makes. But laid next to one another as they are is like moving from one painting to the next, gaining a cumulative, rich tapestry of musical and visual experiences that makes the journey from one space to the next one of wonder and joy. 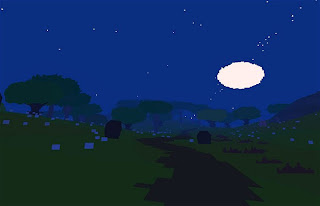 And like a gallery exhibition, Proteus is deeply reflective. Serenely so. This is one of those rare games where I’ve pushed less that the whole way on the analogue stick to deliberately move slower through the world for the simple reason that I am so at peace and engaged with the world that I feel no urge to move quickly.

It’s a game that is so rich with meaning that I often let go of the analogue stick entirely to simply sit back and reflect. As a true toybox there are unlimited stories to be found within the world of Proteus, and each individual will have a remarkably different reading from their time in each game world. It’s not often that we’re asked to use our imaginations when playing a game, but that’s precisely what’s happened here; Proteus wants us to invent our own narrative as we go along.

It might not be the most directly interactive game, but Proteus is a masterpiece of interaction as absolutely nothing happens without the player’s direct involvement. There are very few games that can claim that feat, and that makes this little title one of the most curious and compelling experiences you will ever play.

‘It’s too expensive’; three little words that are killing gaming