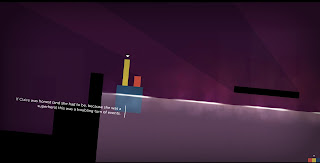 I’m the kind of person who like games with strong characters. Thomas Was Alone stars, literally, coloured shapes. Plain geometric shapes; they have no faces and in fact barely any animation, and yet I struggle to think of characters that I have connected with more in any game I’ve ever played.

Within this incredibly basic puzzle-platformer that asks players to navigate the ‘heroes’ (yes, the geometric shapes) from one side of an enclosed space to an exit on the other end lies one of the most intelligent and nuanced plots that I’ve ever experienced. When playing this game I felt the full gamut of emotion, from joy to misery, excitement to crushing despair, and all through the avatars of a couple of tiny little 2D boxes. 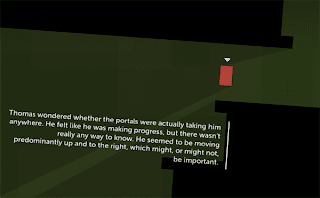 The not-so-secret way in which this game achieves that is by relying almost entirely on its expert narrator; not just to give the game its emotional weight, but to carry its sometimes complex philosophy and liven up some levels that if played with the sound off would be pretty deadpan and dull. A wonderfully British accent runs through musings that range from existential rantings to bitter sarcasm. In many instances I would simply leave the Vita on to listen to these and indeed ponder their ramifications. Only when the soliloquy was completed did I feel the need to pick up the console and try and figure out the puzzles. These become devilishly difficult and rewarding in their own right, but even if they were the dullest things I had ever experienced, I would still feel the need to play on just so I could get to the next snippet of dialogue. 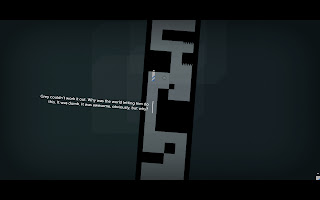 The shapes never talk, and never visibly interact with one another. As I said before, they barely animate at all. And yet thanks to the narration I soon had before me characters with a sense of real tension and complex relationships with one another. The square resented the rectangle because the rectangle could jump higher. The square had a moment of glory when he could slip into a corridor that the rectangle could not, but imagine his disappointment when he found that the switch only generated a staircase so steep that he could not climb it without using the rectangle as a middle step.

What other game captures the youngest child complex as well as Thomas Was Alone? None is the answer. The steady introduction of more and more characters weaves a complex tapestry of relationships and very human emotion. All conveyed to us through a narrator using characterless objects as muses. It serves a gameplay effect too – each shape has different abilities and players will need to work out how to use these abilities together to navigate through the puzzles, but that’s a very arbitrary way to look at it. Far closer to the truth is the simple reality that each new object opens the opportunity for a new character. 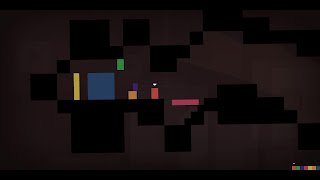 This is the game that draws heavily on the imagination and will appeal most to people who enjoy the storytelling process itself, because in almost every way it is the perfect metaphor for how a good writer builds something that the reader will relate to; taking abstract thought and feelings and giving it meaning is not easy. In fact, it’s incredibly difficult, and this game is the ultimate example of mastering that very storytelling process.