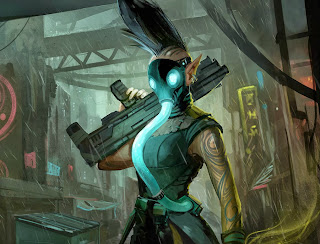 Shadowrun is a legendary RPG, both in terms of the pen-and-paper tabletop game and the original console release a few generations ago. When a certain big publisher decided that the ‘reboot’ of Shadowrun would be yet another generic FPS and managed to annoy the long time fans, a little indie developer decided to run a Kickstarter to produce a ‘true’ new Shadowrun game.

Shadowrun Returns is that game. It’s been on PC for a while (you can read our review here), but the iPad version is perhaps a better fit. It’s a fairly small game by RPG standards and well suited to half hour play sessions. At the same time, it’s a deep enough narrative that it can be a compelling game to settle down in bed with after a long play session.

Creating a ripper murder mystery narrative within Shadowrun’s Cyberpunk setting is a masterstroke. Playing the role of investigator you’re going to be exploring some of the most deplorable environments imaginable in order to solve the case and you’ll come across the very worst that humanity has to offer. It’s a setup that is ripe for exotic locations and intense battles, and Shadowrun takes full advantage of that potential. Because the production values in the game are limited – we’re talking static top-down isomentric environments and a complete absence of voice acting and the like – Shadowrun Returns has that delightful retro feel to it, whereby players are asked to use their imagination rather than rely on having everything dictated to them as with modern games. Those who can stretch the imagination will find a narrative that is endlessly rewarding. 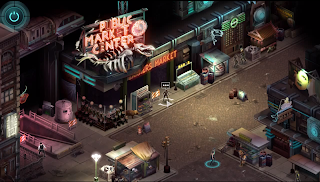 I am also a big fan of the way the combat and experience works. Players earn ‘karma’ by completing objectives – and these aren’t necessarily tied into combat – and that karma can be spent on upgrading attributes, which then unlock skills. Want to be good at melee? Boost the Strength stat. Care more about magic? Charisma’s your skill. Certain dialogue trees are also tied in with these stats, so if you haven’t spent much karma in Charisma, you’re going to have a difficult time charming your way into some information, for instance. It comes together to create a system whereby players feel like they have real control over the direction of their heroes. Even if (and I’ll get to this in a minute), the game never really takes advantage of the player’s ability to make character development decisions.

Combat is a little reminiscent of XCOM, and that is hardly a bad thing. Players get a certain number of actions per turn, and can take cover, reload weapons, shoot at distant enemies, cast magic and so on in a turn-based fashion. My favourite trick is to specialise in melee and use weapons that knock down an enemy’s actions. Those attacks might not do much damage, but immobalising the enemy allows me to control the battlefield and prevent counter attacks. Other players will find their own strategies and this is a mark of a great turn based combat system, but I do have one major complaint and it’s a big one – somehow magic users get to attack through the terrain, and so cover is largely useless against them. It removes the sense of reward in cleverly positioning your heroes. 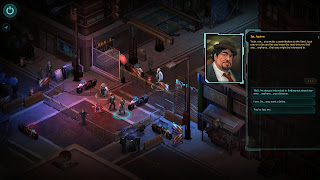 Unfortunately Shadowrun Returns falls into some other traps of modern gameplay outside of the combat. It is painfully linear for a start. The game is broken up into chapters and these chapters take place in small environments with virtually no room to explore. Shadowrun pretends to have side quests and will advise players of something like “find the meat shop” as an “optional” quest, but the meat shop will be sitting on the only street in the area, which players need to travel down to the next main objective anyway.

I can tolerate FPSers treating players like idiots who would get lost if they had the option of two paths through a level, or ran into a dead end. But RPGs need to treat their players with more respect than that. Exploration is a core requirement of a good RPG, and Shadowrun Returns fails at this. Final Fantasy XIII was less linear. 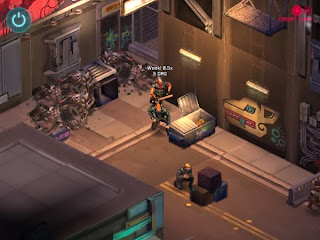 Similary, I do not like how the game presents players with a wealth of possible dialogue trees, and then offers no meaningful consequences to the decisions players make. If I’ve got six options as a response to a comment made by a major character, I expect the game’s overall narrative to change accordingly. If I make an ally of that major character I expect a different experience to if I’m rude and make an enemy of him or her. But Shadowrun Returns doesn’t do that. The game plays out exactly the same regardless of my decisions. Perhaps this was a budgetary limitation, but should this game be successful enough to warrant either a sequel or a long tail of DLC quests, then I hope the developers study up on Bioware, and specifically Baldur’s Gate, to understand why dialogue trees work, and why they can also fail, as they do here.

It’s also worth mentioning that the iPad version of Shadowrun is half the price of the PC game, but comes with half the content too; where the PC game has a full-fledged scenario creator and sharing tool, the iPad game doesn’t give players access to any of that content. That means no playing the player-created scenarios, and no creating your own. This is disappointing considering that Disney Infinity Toy Box has already shown us that not only are these features possible on iOS, but they’re fun. For people that do finish the default scenario in Shadowrun, you’ll need to wait until January next year for the next “official” scenario.

These criticisms aside, Shadowrun Returns is a nice, brief (at about 15 hours) RPG narrative. It’s too passive for its own good, but the setting and quality of the writing make it worthwhile for fans of the original, or the Cyberpunk genre in general. Just be aware that the iPad is not exactly short on must-play RPGs now, and Shadowrun doesn’t come close to the standards of the likes of Avernum, Baldur’s Gate or Knight of the Old Republic.

And hey, it’s better than the abysmal Shadowrun FPS.

Hands on with the Xbox One; iteration, not revolution