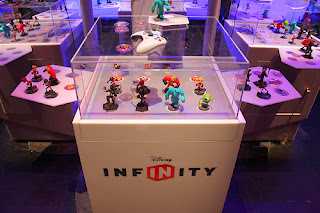 Over the last couple of weeks Disney has released a few “companion apps” to its rather wonderful Disney Infinity console game.

The first of these was a little throwaway. Action! Was clearly designed for kids who have been dragged away on a trip and whose parents didn’t want to spend money buying the woeful 3DS version of Disney Infinity. But the second app, released just a few days ago, is a text book case study in the kinds of second screen experiences that everyone (yes, you too, Nintendo), need to be working on for their own games.

Toy Box is a literal name for the app – it’s the fully-featured Toy Box mode in the console game. That means you’ll be building your own Disney-themed environments using the environments, structures and characters that you’ve unlocked by playing the game on the big screen TV. As long as you’ve set up a Disney Infinity account, you’ll be able to access everything that you’ve unlocked in the console game on your iPad, and that works the other way too – link the game and the devices to your Disney account an anything you create in the Toy Box will be available on the console game.

In other words, this is the perfect app for creating levels on the go, and then kicking back and enjoying them on the big screen with the more comfortable console controller. The virtual buttons on the iPad are decent enough but clearly designed as a last resort for people that don’t have a console at all. The app itself is a free download with the one character unlocked from the start (Mr. Incredible), but each miniature that you buy at retail will include a code to access the character in the iPad game. So if you’re like me and have a dozen miniatures you get to play with them in both the iPad and console game.

I have to stress it’s so great that this companion app gives players the same features as the console game. Designing levels is one of the most entertaining parts of Disney Infinity, and being able to do it anywhere, anytime elevates the experience from a simple game to a complete hobby.

This is clearly all part of Disney’s plans; to create an all-encompassing platform for which to build on, add to, and become a product that extends well beyond being a simple game. And in doing so Disney will sell more miniatures, it will have a product that people see as being worthwhile both as a mobile and a console game, and provides for even more scope to expand on into the future.

Other developers are doing similar things, of course. Ubisoft has some big things in the works for the second screen experience with the next generation of consoles. EA’s got that tactical map for Battlefield. Microsoft has Smart Glass. These features are good, and I suspect they’re coming from genuine demand amongst gamers who might not necessarily be interested in playing games on their tablets, but happy to engage with their favourite games on a more extended basis through that second screen.

Because this is a fairly new feature finding its way into games, developers are still working out how to make effective use of that second screen experience. Being able to play your favourite games both at home and on the go – such as through Cloud saves and the PS3/ Vita cross save feature is nice. Being able to access maps and stats is another. But I do feel that the best way that game developers can use the second screen experience is to give players something that allows them to participate in their favourite game in a way that’s suited to the portable platform.

Level designers like Disney Infinity’s work brilliantly as touch screen experiences. There’s one. Another great example would be an RPG that allows players to complete some minigames for some additional loot while on the go. Sony has some good ideas in mind with Drive Club allowing players to organise racers and manage their “Drive Club” on the tablets.

Anything that enhances engagement with a game beyond the game itself is a good thing for that game. Because it keeps encouraging people to play the game, and it provides developers with additional opportunities to drive content and perhaps even DLC and the like, it turns the game into more than a single sale, and rather into a suite of potential services. That then benefits the player because their favourite game can be a on-demand part of their life then.

I’d really love to see what Nintendo could do with this kind of power. From the simple (being able to work on your Art Academy masterpiece while on the go) to the really complex (imagine a Wii Fit app that did the work of recording your steps, but then used the iPhone’s geo-capabilities to also generate map information and other data and import it into your activity log on the Wii Fit game). There’s a lot that Nintendo could do with that second screen, even if Nintendo didn’t produce the screen itself, that can categorically make its software better value and more enjoyable for the player.