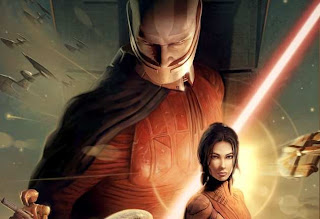 And just like that that iPad has one of the greatest BioWare RPGs, and the greatest Star Wars game, ever developed.

The port of Knights of the Old Republic to the iPad has lost nothing in translation. It has picked up no bugs along the way. This is the game that you played to death and loved on the PC or original Xbox, and now, finally, it’s portable. A heavy download to the device at 2GB, and at over $10 it’s one of those “premium” priced games that, no doubt, some people will claim is “too expensive,” but it’s worth the damage both to the iPad’s storage as well as the tiny hit to your wallet.

Surely everyone who reads this website has played a classic BioWare RPG at some point, whether that’s Baldur’s Gate, Dragon Age or Mass Effect, even if you’ve yet to play its take on the Star Wars universe. If so, there are some obvious common threads between all the games, and Knights of the Old Republic is no different in this regard. After a brief tutorial period you’re let loose on the universe to more or less find your own way around. There’s an overarching plot, but the game doesn’t really pressure you to take it on and offers numerous side quests and minigames to distract you if you’re so inclined. For the Star Wars universe, with all its cultures, races and fantastic environments, this works as brilliantly as expected. Rarely have players had such an opportunity for immersion within George Lucas’ legendary vision. 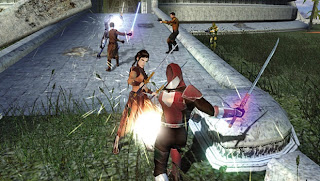 Where BioWare games differ from other non-linear RPGs, such as those from Bethesda, is in their love for heavy moral decision making. At numerous points through Knights of the Old Republic players will be presented with hopeless decisions to give up key advantages in order to take the moral high ground, with serious ramifications to the character if they choose to take the path of evil. There are consequences for your actions in the typical Bethesda game too but it’s always a mechanic ticking in the background rather than something that you’re forced to think about. With Knights of the Old Republic, the moral themes are front-and-centre and players have to navigate through some tough decisions.

This is why BioWare games have always been famed for their cinematic plotting. It gets a little heavy-handed at times, to the point of preaching (something that the team has become progressively better at over the years, with the Mass Effect series being a far more refined script than this of the earlier Baldur’s Gate), but by the same token it builds a real attachment between player and character. Those interactions and the way the player handles the occasionally-hostile conversation from within his/ her own party of intergalactic heroes and heroines creates a genuine narrative attachment to the character; the player is genuinely the author of his/ her own character’s story. 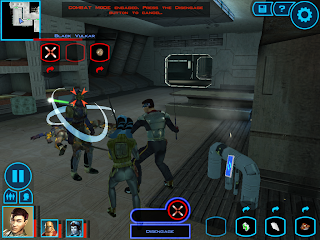 With all BioWare games I tend to replay them numerous times over a span of years. One time I’ll play the righteous hero and the next the “just get what needs to be done, done” kind of character that still sits on the side of good but in a way that upsets the authority. Another time I’ll just play an evil bastard. With each play through the experience is fundamentally different and my character ends up being a different kind of person in  my eyes. No other game developer can make me engage with the game in that way; with the typical JRPG I’m playing along with characters that are written by the developers for my consumption, and with other large-scale Western RPGs, just as Skyrim, I never feel a sense of character. Playing the game from first person with a voiceless lead means I tend to play the game with my own personality put into the responses. It’s effective, but it’s not cinematic. Only with Knights of the Old Republic and other BioWare games do I get the sense that I’m the author collaborating with the developers to create a story.

The port itself is faultless. The developers have implemented some good “tap to attack” commands with the pause button within easy reach to assign a new set of commands in protracted battles. Moving around is easy though I do recommend playing with the sensitivity settings as the default felt a little slow to me when it game to controlling the camera movement. The dialogue controls have also been tweaked from the console/ PC version to minimise the chance of inputting a response you didn’t mean to. Each dialogue option is assigned a number and the numbers appear as buttons on the side of the screen. After deciding on the response the player needs to tap the corresponding button. Because of the effort put into the port optimisation not once did I feel unfairly treated. 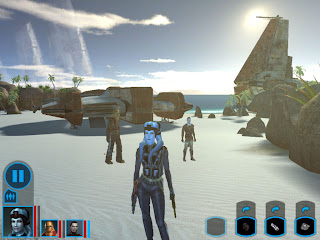 Graphically the game is starting to show its age. Though the fantasy is as alive as ever on a technical level environments tend to be small and enclosed in such a way that there isn’t the same sense of scale of later games such as Dragon Age. This is offset somewhat by the music, which is classic Star Wars and sets the scene unbelievably well. On a purely technical level I was disappointed that this game doesn’t support AirPlay for widescreen support on my TV. I would have enjoyed playing it that way.

I can’t think of a single reason that someone would not love this game. So, if you’ve got an iPad, buy it.