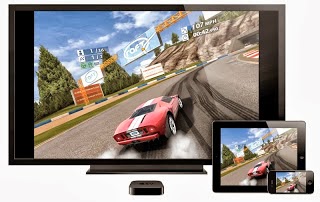 With all the hype surrounding the vastly approaching next generation gaming console releases, it’s a joy to see gamers’ excitement filling the web and forum pages across the Internet.

But as I see what’s to come with these new consoles, it’s become quite apparent that it’s a lot more of the same that we already have. Sure there are improved specs, but the upgrade is not as visually obvious as it was in previous generations. Yet, with the economy just recently looming on the brink of another potential collapse and the production cost of games continuing to rise, I can’t stop myself from thinking even further forward. Why? Because I’ve had something in my home produce that “Wow!” factor numerous times now and it wasn’t a gaming console.

Apple TV has become the centre point of my home’s daily entertainment pastimes. As avid iOS consumers, the integration between our iDevices and Apple TV has been something, well, I guess you could say revolutionary. It’s a common thing for my wife or I to find something on our iDevices that we want to share with each other (e.g. funny YouTube videos, new release music videos on Vevo, picture snapped earlier that day, etc.) and the ability to easily do just this wirelessly via our home television is effortless. In short, it’s this is how I desire to see technology further evolve into my daily life, especially with its cheap asking price of $99 USD.

When hosting a small gathering or family at my home, Apple TV is regularly used in my household. My wife and I recently took a trip to St. Louis and at one of our recent gatherings the conversation eventually flowed onto our vacation. I quickly pulled out my iPhone and streamed the pictures we had taken to show everyone. Interest in our trip rapidly transitioned into questions to how they were viewing pictures on my phone via my television. After giving a quick explanation, people were shocked at how cheap the Apple TV was and once they realised all the features available through the device, became very interested in this technology. I couldn’t help but to be reminded of another device that had at one stage garnered a similar reaction: Nintendo’s Wii.

There are some differences, of course. The Nintendo Wii was a near-instant market success, while the Apple TV has taken a while to really take off (though it looks like it is now). But where the similarity is remarkable is the fact that both products have sold themselves, and it’s not until someone sees one in action that it is really able to impress.

In addition, with Cloud-based technology gaining steam – could it be possible that in the coming decade we will be sitting on our couch playing next generation console quality video games via the smartphones in our pockets? From my point-of-view, the probability is becoming increasing more plausible. You can already stream a handful of current generation home console quality video games to your TV via current iOS devices and the Apple TV in gorgeous 1080p: Sky Gambler’s: Storm Raiders, Real Racing 3, FIFA 13 and NOVA 3 to name a few. And for the massive casual gaming crowds, titles like Monopoly right through to Agricola are providing board gamers a new and playing piece-free way to enjoy family game night.

The technology is already here and it’s rapidly advancing. It isn’t just on the iOS front either, as Google’s Chromecast is following suit – not to mention Microsoft’s Smart Glass and Sony’s PlayStation Vita/ console integration. But this brings up an interesting question; when there is still so much to be done with these devices that everyone has, and can now provide that home console experience too, what role can consoles still offer?

The install base for these devices is already in the hundreds of millions and losing the need to purchase a sole device to play a video game gives players in a down economy additional money for games. If every current console gamer spends an additional $500 USD on games, instead of gaming consoles, more developers would find themselves financially secure; the money would be better spread around the industry. The removal of the 10 per cent of revenue that goes exclusively to retailers via second hand sales will help the industry’s overall financial stability as well.

When put into perspective, it could seem that the mobile industry isn’t simply a disruption within the gaming industry – maybe it’s the answer? If these devices can allow us to play next generation games on our televisions via streaming technology on the multi devices that we will already own, the install base for publishers to sell its games to will be massive and the potential revenue streams this could bring just might be the thing that sees more positive stories than we’ve been seeing of late.

– Chris I.
Editor-at-Large
Find me at Twitter: @Slapshot82
Find me at Game Center:Slapshot82