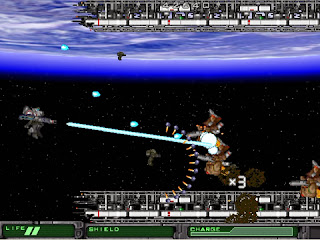 Is Armed Sevena SNES game that forgot to be released? Because if not, it sure does one masterful job convincing me otherwise. Everything, from the art design to the music to the simplistic controls, gives off the vibe of a game released when Mario was the bees knees and Sonic the Hedgehog was the coolest and/or fastest thing alive. Unfortunately, this entails both positives and negatives.
Armed Seven is a 2D shooter doujin game developed by Astro Port and translated for English-speaking countries by Nyu Media. As is par for 2D shooters, the player moves from left to right while dodging and shooting waves of bullets and/or enemies with their weapons of choice. Other than that, the game doesn’t have much else to discuss from a feature standpoint. You either play a campaign stage on a specific difficulty level or you don’t play the game at all. Yes, the replay recording and mock achievements are nice touches, but they do not affect or add much to the gameplay experience.
This limited feature list creates a large dependence on the sheer focus of the title to carry the entire weight of the game, and surprisingly enough that gameplay delivers. Armed Sevenis a fast-paced 2D shooter lots of enemy, bullet pattern, and boss variety. The controls are spot on, with the player being able to turn their mech around on the flip of a dime. The scoring system allows for a wide variety of high scores, always leaving room for improvement. While this is not a title that will revitalize the 2D shooter genre, it is definitely a good example of what can be done when individuals put their time and effort into crafting something great. 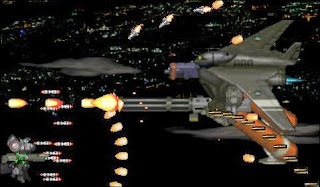 Unfortunately, there are some minor quirks that can get in the way of the shooting action. The biggest offender is the lack of a pause button. Yes, while playing a stage the player cannot pause the action in any way. Thankfully, the levels are shorter than what fans of the 2D shooter genre have come to expect, so this is not a massive problem to the player.

Moving on, some weapons feel slightly imbalanced in the game. Some weapons start out too weak and others too strong, so in effect there’s a small range of weapons available to players to choose between. Finally, there is no story in the game whatsoever. I am completely understanding of the fact that the game designers want to focus more on the gameplay when their resources are limited, but there is quite literallyno story at all. The only words I could find that explained anything about the setting, context, or motivations of anything were “1989, After the Gogah War.” A couple or paragraphs would have been sufficient, but as it stands the lack of context might frustrate some people.
However, those complaints can mostly be overlooked with the aesthetic presentation of the game. The spritework, music, and designs are all very good and all very reminiscent of titles present in the 16-bit era. The sprites are all very well done, with all of the them hitting that magical mid-point between being detailed and blocky enough to have a nostalgic charm. The music hits the weird, artificial notes that are enjoyable and also heart-pounding. The more standard enemy aircraft design meshes perfectly with the mechs, giving off that late 80s/early 90s aesthetic. If you are truly a sucker for the look and audio of games of the 16-bit era, I can’t see you turning a blind eye to this game.
Overall, Armed Sevenis a well-executed 2D shooter with several quirks that hold the game back. However, the aesthetics and sold gameplay of the title can easily take attention away from those slight flaws, leaving a lasting impression that is much more favorable than it is unfavorable.

Next generation mobile devices: the home consoles of tomorrow?