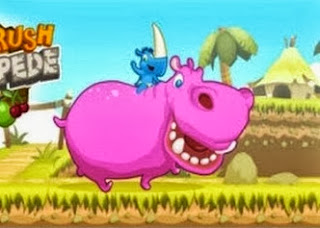 Mobile games all aim to be addictive. They are designed so that if you sit down on the train or lounge or whatever, you can just whip out your device and play a game for five minutes. But the secret to a good iPhone game is to get to you come back over and over or sink hours into something that you should be able to get your fix of in five minutes or less. It’s bad for productivity, but it’s the glorious reality of Rhino Rush Stampede. It’s so addictive and wonderfully so.

I’ve had this game for a few weeks now and been far too busy playing it to take the time to write up a review. It is a simple runner with main character as a little blue rhino who loves picking up fruit. Starting with bananas, moving on to apples and all the way up to avocados, the goal for the whole game is simply to collect fruit. Meanwhile, jumping obstacles little wooden boxes, armadillos, cacti and water pits isn’t overly difficult. I’m unsure what a good score is but I’d get up to about 4,000m before starting to feel challenged. Overall, it just seems like a simple runner, but there is a little more under the surface. 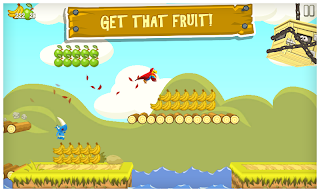 What Rhino Rush Stampede does well is its sense of humour. Whereas Temple Run and Monster Dash and games of that ilk use human-looking characters, the use of the cute little rhino is smart. It let the developer bend reality even further than typical for the genre, and this is where some of the bonus boxes come in. Generally hanging, there are wooden boxes where you can pick up a great creature to ride. Animals such as flamingos, hippos and dragons will all help you out, but it’s the T-Rex that is the most impressive. Seriously, how many games can you recall where a rhino can ride a T-Rex?

On top of that, there are lesser bonuses, such as a unicycle with an umbrella for gliding, a jeep, a rocket and balloon. You can even grab a chili bonus that turns you into a veggie rhino, power rhino and hot rhino, all of which are still vulnerable to water or hard corners but can knock all the other obstacles out of the way. 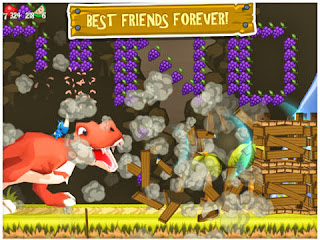 Having played it quite a few times, I can’t think of anything that that I had any issues with. Being a free game from XformGames means microtransactions, and if you’re desperate to pay some money for extra fruit pickups prices start at $0.99. The fruit unlocks objects to purchase in the ‘Shaman’s Corner’. You can purchase various things including a fruit magnet or extra lives or any of the vehicles, but I didn’t even explore the Shaman’s Corner for a while after I started the game because I enjoyed it enough without the extra help.

Ultimately Rhino Rush Stampede isn’t a new idea by any stretch of the imagination. It’s a simple 2-D runner and if you look at that mechanic, there is not really much that you can’t do on other games. But it does it really well with a really nice sense of humour. It’s gotten the addictiveness down pat and takes what has been done before, does it well and puts its own little twist on it, which is perfect for a mobile game.

Next generation mobile devices: the home consoles of tomorrow?